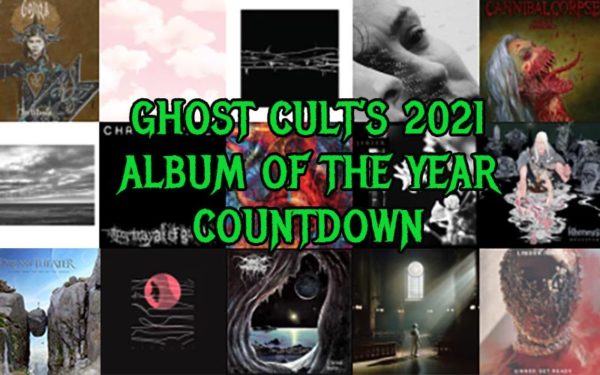 OK, so, it wasn’t quite the “getting back to normal” we’d all hoped for, but at least there was some progress and the “new normal” started to feature several familiar elements that had been part of regular life BC (Before COVID, as if that needed spelling out)…

And one of those things was a collective “fuck it” from the alternative music world and a decision to return to a full and regular album release schedule, even if it was a little tentative at first, and the second half of the year was a little backed up with some seismically gigantic slabs of rock and metal not seeing the light of day until the tail end of the year.

New school Death Metal upstarts Gatecreeper were the first to swing into action with early January seeing the unannounced surprise release of a ten-track beast (spoiler alert, you might be seeing something more of them a bit later on in this countdown) that was seven slabs of feral grind and one epic doom closer to stir us from our COVID slumber and remind us all that, tours or no tours, Metal bands gonna Metal, innit.

So, other than a bumper year where all the delayed albums from 2020 found their way into our ears, where all the bands that had nothing better to do than write and record an album during last year’s lockdowns vomited opuses galore in our direction (for better or phlegm-ridden worse), what did the year of our (dark) lord 2021 mean in terms of alternative music?

A helluva lot of bloody good stuff of every sub-genre and description-blurring type you can imagine, as you’re about to find out as we take you through the Top 75 albums as voted for by the cast, crew and alumni of Ghost Cult. 2021 was a year that saw the greatest number of albums nominated and voted for by the GC family since we started doing our Albums of the Year round up. So, pull up a stool, grab yourself a tankard of the tipple of your choice and raise it to rock and metal pulling us through a shitty year by being the light at the end of every tunnel.

This year’s Albums of the Year 2021 is dedicated to those we care about – ours and yours – that we lost this year who would have been giving it large to pretty much everything on this list.

For Mat, for everyone

65. Architects For Those That Wish To Exist (Epitaph) GC Review

56. Biffy Clyro The Myth of the Happily Ever After (14th Floor)

52. Knocked Loose A Tear In The Fabric of Life (Pure Noise)