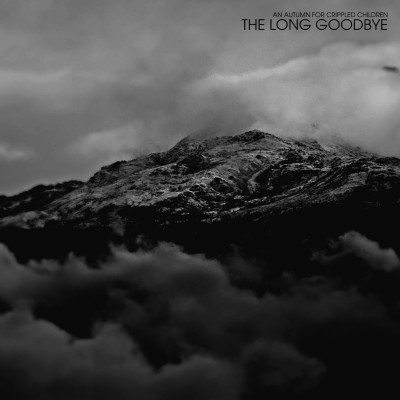 An Autumn For Crippled Children have a very credible reputation, one of almost unreserved critical acclaim gained over the four albums that precede The Long Goodbye (Wicker Man), four albums that have established the Dutch post-black metal band as able to combine prolificacy and class in rare measure, and a band whose raison d’etre is in the beautifully dark and melancholic.

And release seven (in six years, for they have also produced two EPs) will continue that reputation, and starts by snapping the head of the listener to attention with a deformed upbeat Death Rock opening trio that fuse goth-punk, black metal jangle and profound Cascadian melodies. Like a permeating disease, the white noise of distortion sits like an ethereal fog atop the bleak atmospheric music playing beneath its influence, as the dance beneath slows from the Death Rock four-step of the first three songs to a statuesque stall of reflection which subdues the mood.

Whether that is the right play or not depends on whether you’re prepared to accept The Long Goodbye for what it is, rather than what you thought it was going to do, or indeed what you wanted it to do. After the unexpected and pleasing opening, the expected combination of black metal shuffle and despondent atmospheres takes over from ‘When Night Leaves Again’.

Taking it for how it plays out, The Long Goodbye proceeds to unveil post-Black Metal dejection, with songs like ‘Endless Skies’ that segue from gentle mood pieces into evocative and epic movements, before recalling some of the simple touches that impressed from the outset towards the tail, with ‘Gleam’ an expansive story splashed with flickers of Americana that explodes , contradictorily, into an uplifting yet sad beauty in the manner of a Deafheaven.

As mentioned at the outset, An Autumn For Crippled Children have a strong reputation that they’ve cultivated and maintained at every step of their existence. The Long Goodbye will only serve to enhance that standing, with the exploration of death rock, alongside their usual despondency and delicate post-Black metal, adding a welcome vibrancy and impetus.