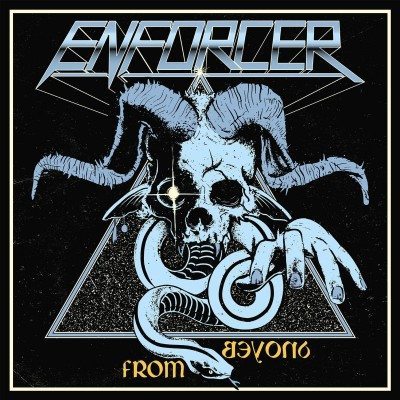 Enforcer’s shtick was old before they had even recorded their first demo. But four albums into their career and they can pen a good ode to classic 80s metal. The Swedish four piece – Olof Wikstrand (Guitars & Vocals), Joseph Tholl (Guitars), Tobias Lindqvist (Bass), Jonas Wikstrand (Drums) – probably know it’s not 1982 anymore (we hope…), but they don’t care.

From the opening notes of ‘Destroyer’ you know what you’re going to get over the next 40-odd minutes; no pretence, no bullshit, just big riffs, melodic hooks, shout-along choruses and the urge to wear nothing but denim and leather. This is pure high octane 80’s metal from 2015.

You like galloping riffs? We got it. High-pitch wailing? You know it. Air-guitar inducing solos? Of course. Enforcer have done their research; Judas Priest, Iron Maiden, Diamond Head, Saxon, plus numerous lesser known ‘cult’ acts; all your favourite NWOBHM influences are present and accounted for. It’s a meticulous copy of all the best bits of heavy metal’s classic years combined with a good ear for hooks. You could make a game out of identifying which riffs they’ve stolen from which band/album.

From Beyond (Nuclear Blast) has a default tempo of fast. The likes of ‘One with Fire,’ ‘Hell Will Follow’ and the opener all scream speed metal. ‘The Banshee’s simple but addictive chorus and twin lead guitars has future crowd pleaser written all over it, while ‘Below The Slumber’ and album closer ‘Mask of Red Death’ are both six-minute mini-epics; starting slow and quiet before bringing a plenitude of riffs and noise.

There’s nothing particularly wrong with From Beyond; if you liked any of their previous efforts (or indeed any other super retro act) they’ll be plenty to enjoy here, and if you have a craving for authentic sounding metal from three decades ago you’ll be more than pleased. But anyone chasing anything more than nostalgia will find nothing particularly to enthuse about.