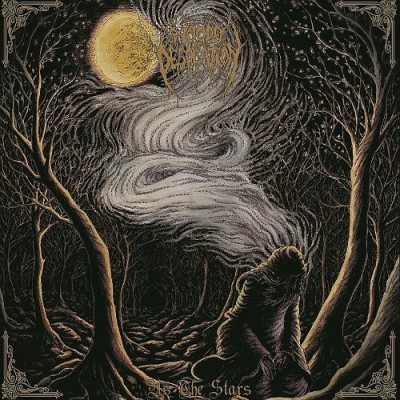 This one-man metal project that we know as Woods of Desolation comes from the intriguing mind of D., the Australian musician that has been playing an undeniable important role on the Down Under’s underground scene not only with his current project Woods of Desolation, but also with Forest Mysticism and Grey Waters. The road that was started with depressive black metal (the highest point being the debut full-length released in 2008, Toward The Depths) suffered what we can call a big change with the injection of shoegaze and more ethereal environments and soundscapes with Woods of Desolation’s sophomore album, Torn Beyond Reason (released in 2011). Three years after we have the third album which mixes the sounds of Forest Mysticism with the sounds of Grey Waters. It sort of works as a full circle for D., the musician in charge of this new album, As The Stars (Northern Silence Productions). With the help of Vlad from the mighty Ukrainian band Drudkh and the countrymen Luke Mills on bass (Nazxul) and Old on vocal duties (Pestilential Shadows). Having the support and help of other musicians was probably what made this album be so damn rich in terms of guitar layers and tones. Every single track seems to take advantage of D.’s guitar work to levitate and finally rise in a spiral movement that is too fuckin’ strong to be stopped.

As Michael Gira (Swans) once told me, the main goal must be to achieve ecstasy. Well, As The Stars doesn’t have a problem achieving ecstasy, but rather a problem to let it go. Like a fuckin’ junkie never satisfied, Woods’ music on this new album is constantly trying to exceed itself. What once was depressive now it seems to be uplifting and hopeful towards positivity. But who really knows? It’s really hard to tell when you’re so fuckin’ high for almost thirty eight minutes and you’re not allowed to stop. Hopefully this album, and this band, will have the due credit and recognition. If you like stuff like Alcest, Lantlôs and Deafheaven… Why the hell would you not give a chance to Woods of Desolation? Don’t be afraid. Jump!