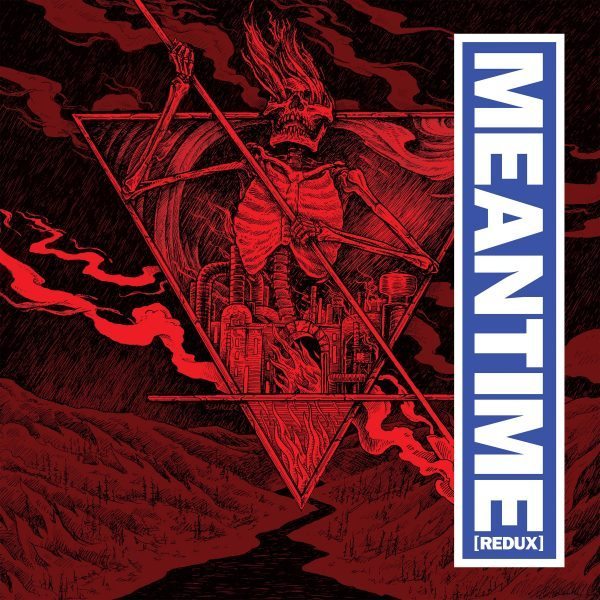 Helmet will go down as one of the greatest and most influential bands ever. This fact is undisputed. Coming out of new York City at a time when a generation of bands bred on New York Hardcore values married to the talent of thrash bands (with some general avant-garde weirdness for good measure), Helmet stood out like a sore thumb of weirdness. END_OF_DOCUMENT_TOKEN_TO_BE_REPLACED

A Kickstarter campaign has been launched by Magnetic Eye Records for a tribute album to Helmet’s Meantime album titled Meantime [Redux] tentatively due for a 2016 release. A deluxe edition of the set is also being planned and will feature bands covers songs off of Helmet’s Strap It On and Betty albums.

Artists recruited for the “Strap It On” and “Betty” tracks include:
Fashion Week
Livver
Milligram
Heads
The Atlas Moth

More bands are expected to be announced soon.

We are beyond stoked to be a part of this awesome Helmet tribute with KEN mode, Phantom Glue, and a bunch more awesome bands! Go and donate now! 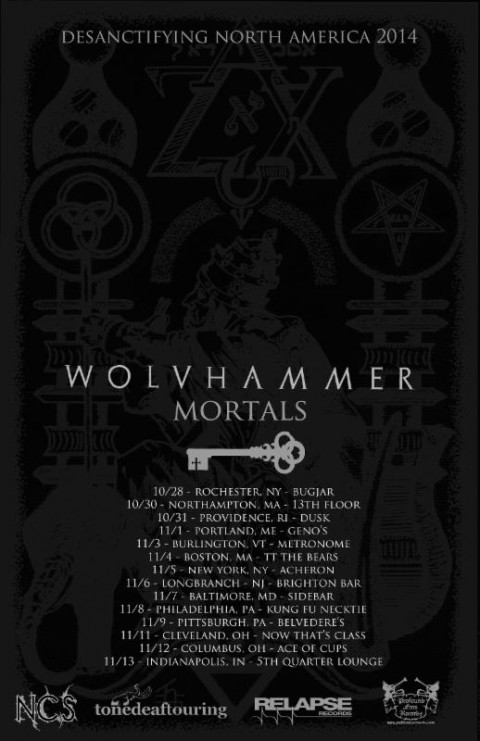 Almost quietly, yet in spectacular fashion, American Black Metal as a scene has had an amazing year in 2014. While it’s not kvlt or troo to humblebrag or worse, fall into douchecelebrations over it, this was a year of great releases, many sick tours, and a further maturation of the landscape. While our Scandinavian forefathers still banging around are doing the senior festival circuit full of theatricks, and our better distant relations in Western Europe favor throwback flavors and doom inflected jams, USBM could not be in a more original state of being than right now. Among the flashy all-star affairs (Twilight), the gargantuan name releases (Krieg, WITTR) and morbid curiosities (Blake Judd in general and others) two amazing releases from USBM bands were by Wolvhammer and Mortals. Such glee to see them tour together several times this year as both bands compliment each other well.

Let’s not kid ourselves… I would love to say this show was as packed as Agalloch was last summer, but it wasn’t. In a torrential month of shows, this night was one you either played or made an effort to get here and be part of this. There were maybe 60 people plus band personnel tops in the room. For me it felt really special and intimate, not abandoned. I am not ready to share all these bands with everyone just yet either. There might be a certain power in the anonymity somehow, as if at least the Boston/Cambridge hipsters didn’t even make it out to this show en masse. Normally I’d be bummed about the light turnout, but it was ok. Oh and there was a guy in a fur coat that would make Liberace jelly and a smelly Oi punk kid that raged the entire night, even in the lighter moments musically! 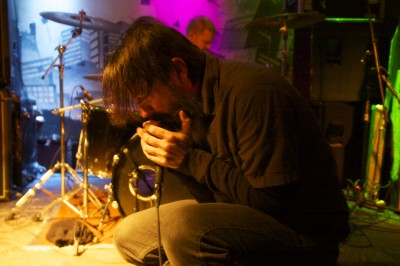 The night started off with two locals in Stranger and LIVVER. Stranger is indeed strange. Sort of a New Romantics, Factory Records-era dance punk band troupe, complete with a singer that came on like the love child of Ian Curtis and Debby Harry, which came out of the womb to murder Lee Ving with a straight razor and steal his lungs. It was all over the place, and hard for them to keep the plot, but I liked it. Especially vocalist B who I think is scratching the surface of her talent right now. She was harsh and focused the entire set, which contrasted nicely with the music. LIVVER was playing the last show for their album cycle for their excellent Fuck You Pay Me (Ammonia Records) album. It felt like a last show too, an everything, but the kitchen sink performance that would be hard to follow for most other bands. Vocalist Bruce Bettis’ agonized shrieking help wake up the crowd as he paced the stage, hiding in the shadows. It was especially nice to see my buddy Breaux Silcio crushing behind the kit tonight, ending his brief run of shows for the band as a fill in. They are seeking a permanent drummer so if you know someone who loves hostile music, hit them up. 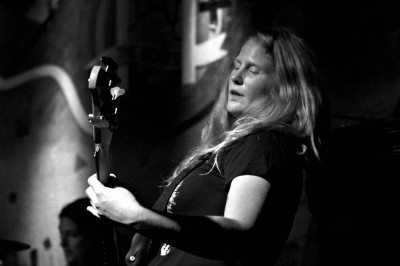 Mortals came next and the place got about as full as it was going to get on chilly Thursday night. The three ladies of the band set up quickly and got right down to work. Work being an aural black metal beatdown at a high level. After staring off as a bleak, blackened punk prospect a while back, Mortals twisted into form after a few years, releasing the sick Cursed To See The Future on Relapse this summer. Just tough and unrelenting riffage with little let up, this band just brains you with the business end of the musical stick for the duration of their set. Sort of a Neurosis meets Tombs with a bit of the light and atmospherics of those two sludgey bands, and all of the killer grooves and licks. Their dynamic composing gives way to long song structures that kept constantly unfolding, and holding your interest. Most of their songs are drawn out affairs, and take the time to envelope you. Terrifying dueling vocals and even stronger riffs mark this beastly sound and everyone in the place was digging it. 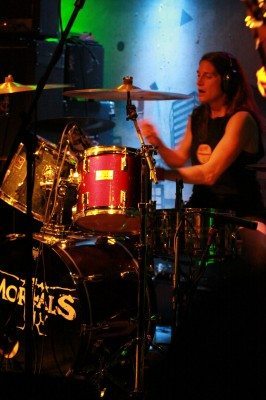 Before Wolvhammer took the darkened stage, I hung out with the band a bit in the dressing room (one can hardly call it a green room with so much gear and so little furniture and accoutrements) and we chatted about some stuff for a future interview series. They liked seeing the fans faces talking to them and getting feedback about their current album, Clawing Into Black Sun (Profound Lore). Wolvhammer are very much a surging, iconic band, without trying too hard to be one. They have their own sensibility and influences they set them apart from others, but coming from the cold kvlt Mid-West, there is a familiar sonic thread too. Another thing about their music we joked about to me what is the upbeat, march-y, sturm und drang of their tempos. Don’t get jumpy, they are blackened punks who aren’t Nazi punks, so… fuck off! 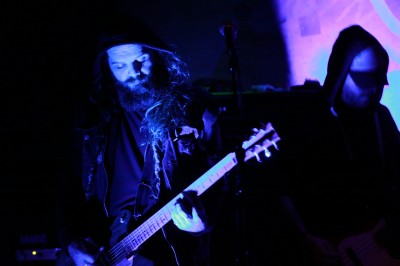 Hitting the stage in total darkness, with only some occasional floor lit blue L.E.D. Lights for mood, the band cut a striking figure as the y lurched into their opener. Adam Clemons (Liar in Wait) cuts a striking figure in that darkness. Razor thin, with a bit of lurch over the microphone, his vitriolic barking is so hoarse and broken sounding, it is alarming. His gravely tone certainly lends weight to the impact of his words. As they are want to do, the band builds up and breaks down sounds led by Jeff Wilson’s (Chrome Waves, Liar In Wait) dirge guitar ministrations. Even though Wolvhammer is unquestionably heavy, they pack a lot of soul into riffs and parts. A slightly drone part will creep in and leave a smile, even though everyone else is scowling. 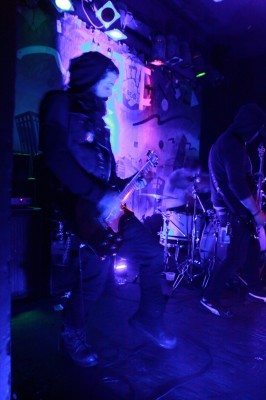 Driven by drummer Heath Rave, the songs flowed, yet were tight as fuck. Nothing gets me more open than when a drummer is precise AND heavy hitting. Drums are supposed to be impacting to you physically and emotionally, not always robotic and fast, especially in this style of music. I’m glad Heath gets it. Meanwhile the band played in a workman like manner that belies how amazing they are as performers. No posturing and posing, just great musicianship. They are the perfect vehicle for this bleak music. I’m looking forward to more tours and albums from these guys.