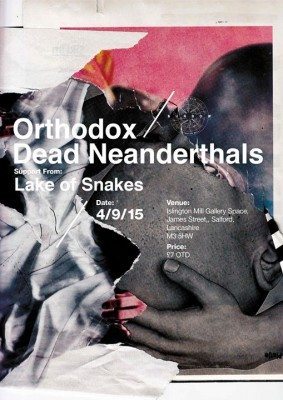 From what is effectively a rehearsal room within the confines of a relic to the greatest yet most environmentally destructive age of Man, it’s fitting that ultimate innovation continues unabated.

On a night made for the sax fiends among us promoter Dave McLean kicked us off with his funky Hardcore outfit Lake of Snakes: a staggering baritone enlivening a heavy groove, the sexy, minimalist ‘Machismo Lament’ the highlight of tracks graced by the harsh rhyming of Dave’s twin Lewis. This was extreme Jazz-metal at its tightest, from a fascinating and current ‘crossover’ band that deserve to be huge.

The sax genius that is Colin Webster took stage left for Dead Neanderthals, the Anglo-Dutch ‘Heavy jazz’ improvisation unit that, basically, defied description. The trio performed their single-track Prime (Gaffer) opus: a constantly squalling barrage of Freeform sound, Webster’s lowing baritone setting the riff while his fellow squealer Otto Kokke screamed with squalling acrimony alongside Rene Aquarius’ frenetic yet pulsating drums. Easy listening this wasn’t, but its vitality and relevance couldn’t be disputed, and to witness the phenomenal Aquarius perform in such close proximity was an utter privilege.

If there’s a greater expression of deep music, of emotive crush, than Orthodox are today, I’ve yet to experience it. And there’s bloody two of them. Where in God’s name were you all?!