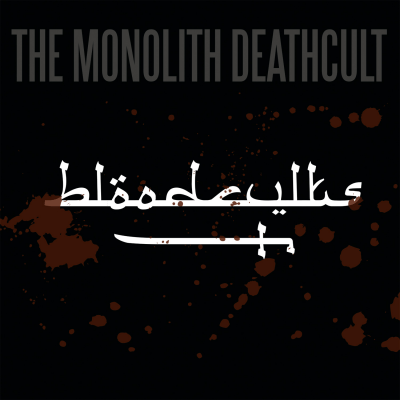 The Monolith Deathcult make me despair for the state of modern Metal. Not by the very fact of their existence, Steel Panther-style, but because they’re nowhere near as well-regarded as they should be. With Triumvirate (Twilight Vertrieb) and Tetragrammaton (Season of Mist) they’re responsible for two of the most distinctive, perfectly-formed and blackly comic Death Metal albums of the last decade. Both shocking and funny in a truly unique way, they blend brutal Death Metal, enormous grooves, dance music and Transformers samples into two albums that, in a just world, would be regarded as modern classics, which makes writing this review an unpleasant task, because Bloodcvlts (Season Of Mist), I’m truly sorry to say, is nowhere near that good.

Initially it appears that their sense of irreverence and lack of respect for tradition is right to the front with Bloodcvlts, an 8 track “EP” lasting over forty minutes, but it quickly becomes clear that the designation isn’t just two fingers to the conventions of the music business. Despite its length, Bloodcvlts is emphatically not a new TMDC album, and it proves itself disappointingly lacking in the things that would make that such an exciting prospect, including precisely that irreverence and humour.

There’s little significantly wrong with Bloodcvlts. ‘I Conquistador’ is relatively weak, and the final two tracks are de-Metalled reworkings of previously released songs (and not terrible for it, though perhaps a little pointless), but the rest is perfectly entertaining symphonic/industrialised Death Metal with some catchy moments. Their knack for combining both groove and violence is still there, but divorced from the dark humour, bold experimentation and the sense of whole-album dramatics that make Triumvirate and Tetragrammaton so special, they count for considerably less than they used to.

Bloodcvlts, then, is a perfectly enjoyable release which is nevertheless resoundingly disappointing. It’s like going to Heston Blumenthal’s restaurant and being served steak and chips – there’s nothing wrong with it, but because you were expecting something distinctive and bold you can’t help but be disappointed. 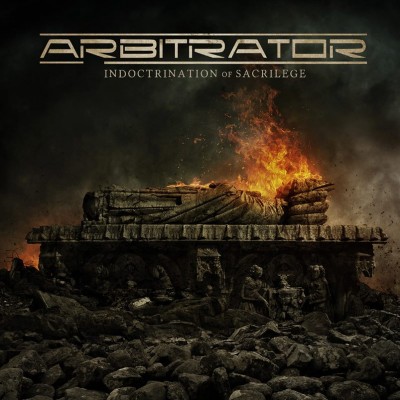 Let’s get this out of the way now – the days when mixing samples and electronic music with your Metal was enough to make you different or “experimental” are long over. There’s still ground to be broken in this area, but it’s to do with how well those elements are integrated and made part of the song-writing, rather than just being there.

Arbitrator really want us to call them “Industrial Death Metal”, but on Indoctrination Of Sacrilege (Independent/self-released), that much-abused “I” word seems to mean nothing beyond some programmed drums, heavy use of samples and “atmospheric” synth passages. The use of electronic music and Dance elements in heavy, low-end Death Metal makes a comparison with The Monolith Death Cult hard for any lazy journalist to resist, and unfortunately for Arbitrator that comparison is not a flattering one. While their Dutch peers create a constant, ceaseless assault that jumps from torturous to comical as often as it moves between genres, Arbitrator go for a more sedentary, considered approach that initially seems boring or flat in comparison.

If this has been something of a roasting so far, then it’s not an entirely deserved one, and it’s time to flip the perspective a little. Once the lack of fireworks have been accounted for and expectations adjusted, there’s some effectively gloomy Death Metal, bordering on Doom in places, going on here. The band are tight and heavy, and have a good sense of dynamics that keeps their music thundering forward even when they bring the pace right down. The samples and electronic elements are largely well used – though they add little to the music, and have a tendency to fade into the background – and the album sustains an effective mood throughout.

Indoctrination Of Sacrilege is a competent, well-produced, entirely enjoyable album of atmospheric “Death Metal With Bits” from an unsigned band who may well achieve something genuinely worthwhile in their future, but as it stands is hard to get too excited about.