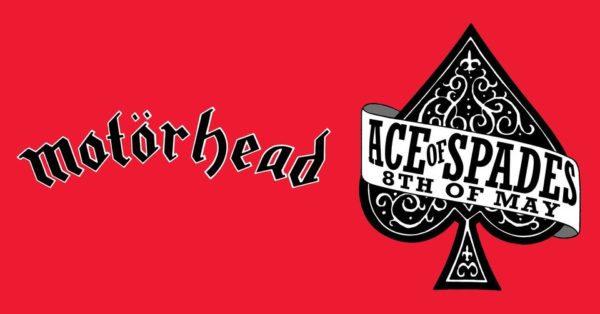 Today is Motörhead Day, May the 8th 2021, in which metal fans can celebrate one of the greatest bands ever and the memory of Ian “Lemmy” Kilmister! A day full of Motörhead activities and activations is happening today in which fans can participate. Use the hashtag #8thofmay and share your love of the band today

END_OF_DOCUMENT_TOKEN_TO_BE_REPLACED

Recorded in front of twelve thousand rabid fans at the Berlin Velodrom in December 2012, Louder Than Noise… Live in Berlin (Silver Lining Music) is the sound of British rock legends Motörhead doing what they did best. Playing rock ‘n’ roll at the loudest possible volume and making lots of drunk people bang their sweaty heads until they either threw up or passed out. Motörhead shows were fantastic, weren’t they?

END_OF_DOCUMENT_TOKEN_TO_BE_REPLACED 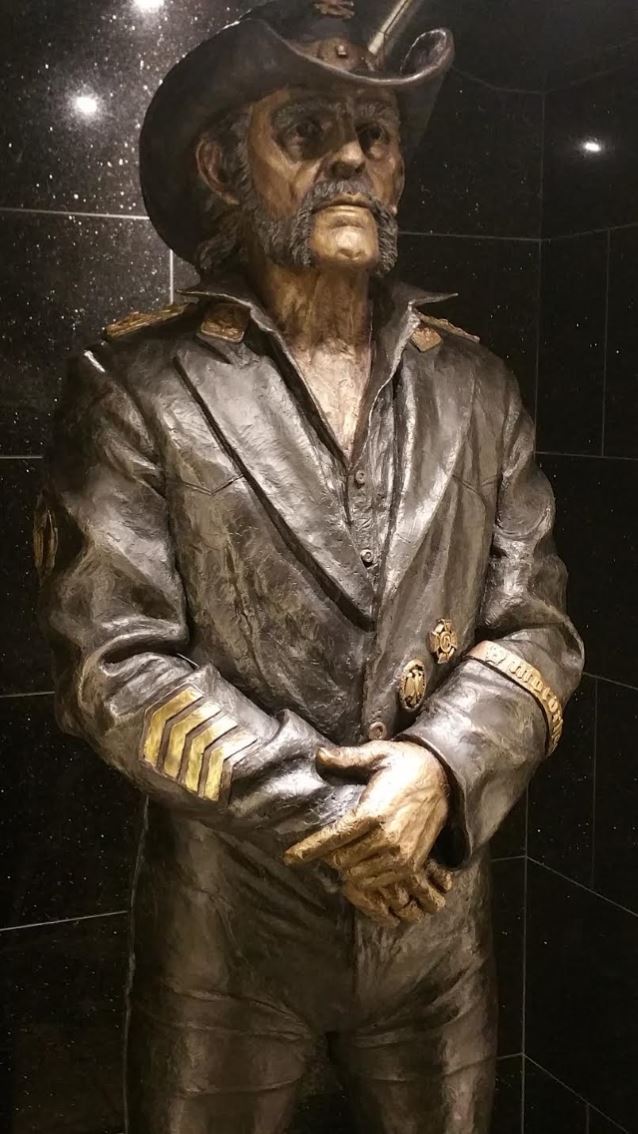 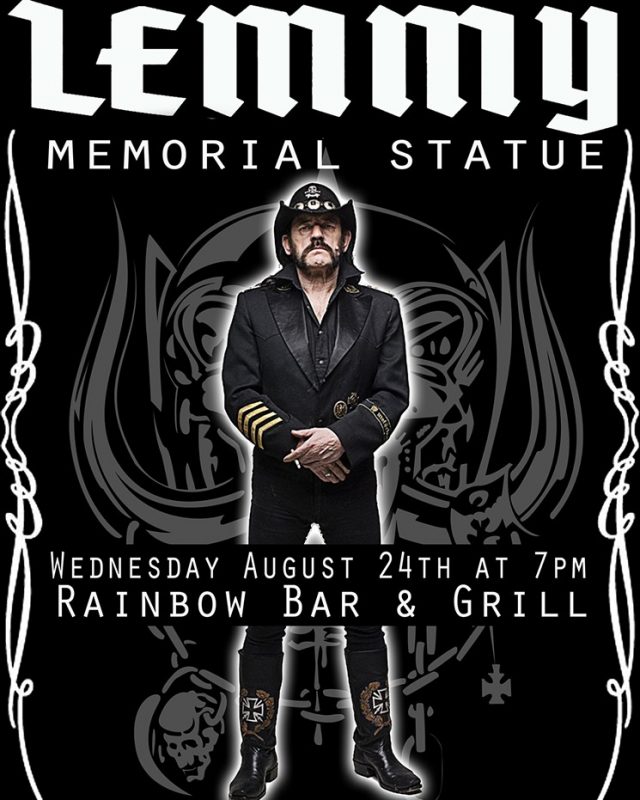 Ian “Lemmy” Kilmister, iconic frontman of Motörhead has been immortalized in a life-sized statue at his favorite hangout, the Rainbow Bar & Grill on the Sunset Strip in Hollywood. 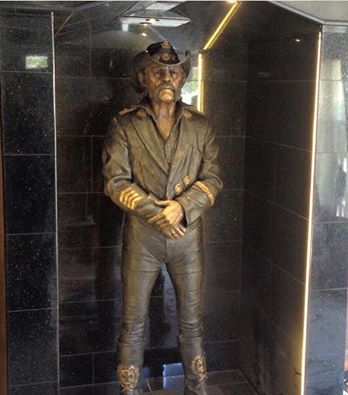 Los Angeles-based artist Travis Moore was selected to create a realistic likeness of Lemmy for the life-size cast bronze statue, which stands at just over six feet tall and will be permanently housed in a special shrine that was constructed in the patio bar area at the Rainbow.

A native of Texas, Travis did his part for free, but there were considerable costs associated with the actual process that ultimately made the statute a reality. A funding campaign was launched by Katon De Pena from classic underground thrash-metal band Hirax, who raised about $23,000 to support the building of the statue. 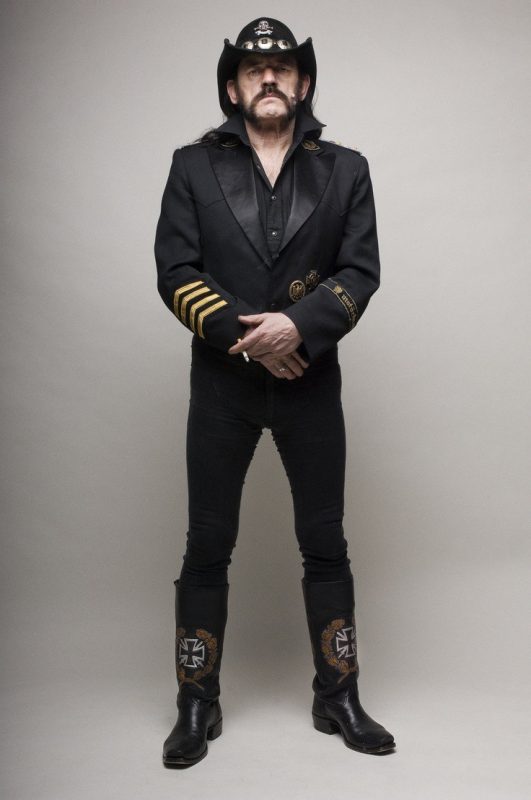 In an interview recently Moore discussed the making of the statue

“I know they were searching for that hat-coat combo. Photographer Robert John had taken so many good pictures of him and I think that was about the time that they were at the Grammys and ‘Ace Of Spades’ was re-charting. There was really a resurgence for him and you can see that it was a happy time and he looks healthy and good.

“We just wanted to stay away from portraying him in a way that wouldn’t be proper, and he needed to be rocking, a tough-looking dude with a full face and that was the idea.

“There was initially some debate about would he be with a guitar? Would he be sitting at the bar? Would he have a bottle of booze? There were a lot of different options, and coincidentally, even the photo that Robert took, he’s standing there smoking a cigarette. We took that out, more of a liability reason, because someone could break that joker off or get caught on that.

“We don’t need lawsuits or anyone injured or definitely have the statue damaged on top of anything else. But there was a lot of consideration that went into this thing and everyone involved, their number one focus was honoring Lemmy.” 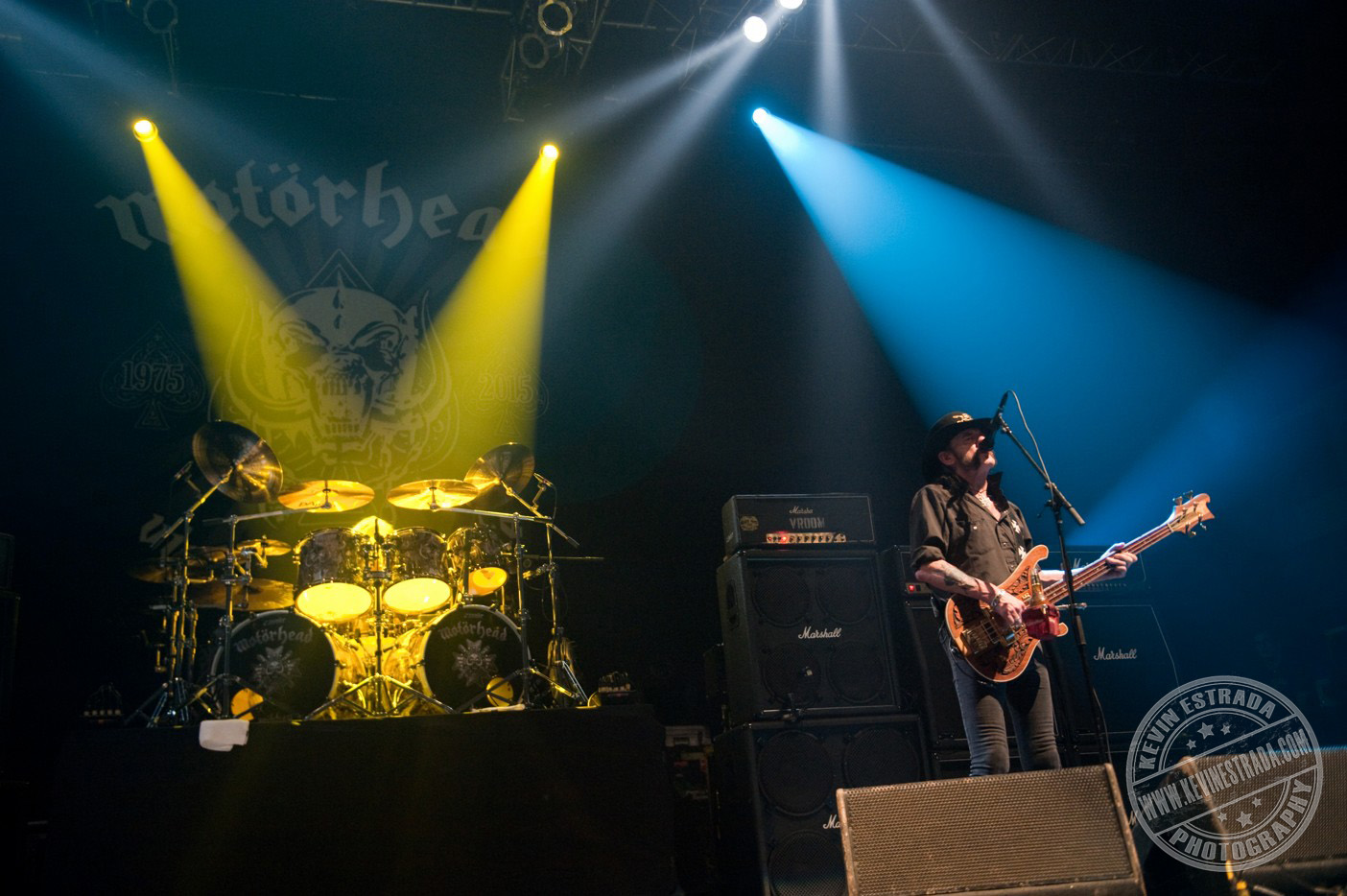 The music world lost one of its true great baddasses when Ian Frasier Kilmister, known to scores of fans by his eponymous nickname Lemmy of Motörhead, passed away suddenly from cancer on December 28th. The shockwave felt with from announcement of his death at age 70 on social media, and then confirmation by the band was heartbreaking for many who followed his career of nearly five decades. Although he has struggled with health issues the last few years, Motörhead was last seen on tour in Europe three weeks earlier, supporting their recent new album Bad Magic (UDR). One of the most enduring sounds in rock music, the obscenely loud volume of the bands’ live backline, unmatched by any band in any genre, will never be heard again. END_OF_DOCUMENT_TOKEN_TO_BE_REPLACED

As news spreads via social media of the sudden passing of music legend Ian “Lemmy” Kilmister of Motörhead, personalities across the spectrum of entertainment have taken the time to reflect and share memories. VH1/Sirius XM Radio host Eddie Trunk first broke the news in a series of Tweets:

Ozzy Osbourne was the first close friend of Lemmy’s to tweet his feelings and condolences, followed by others: 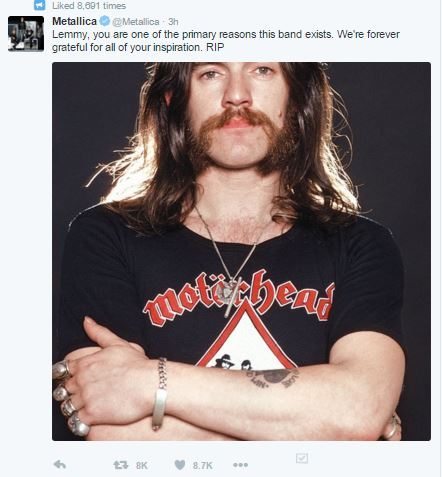 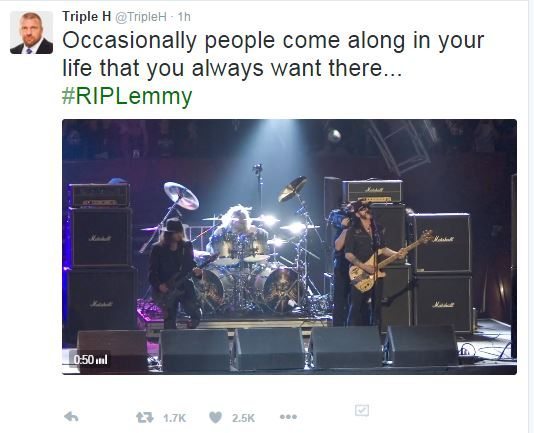 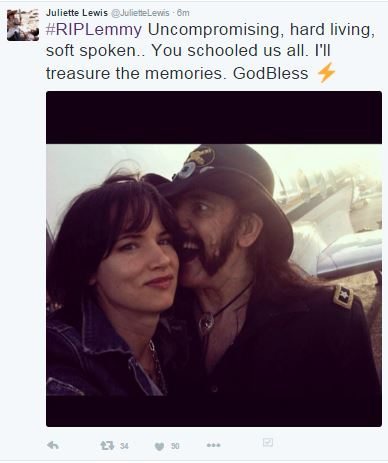 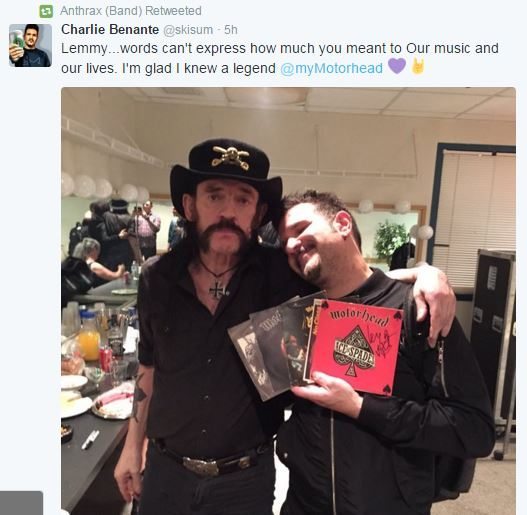 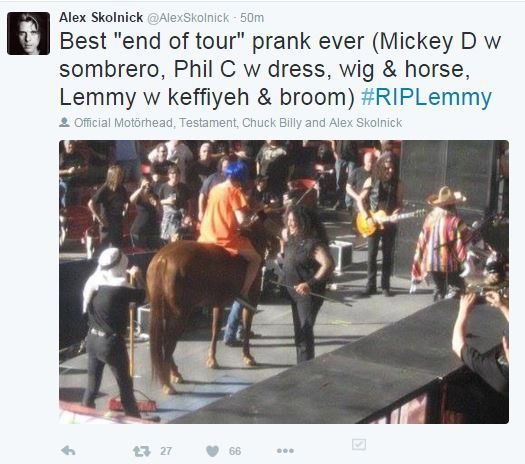 As confirmed by the band, Lemmy who has just turned 70 years old on Christmas eve, was diagnosed on December 26th with “an extremely aggressive form of cancer,” though no specifics beyond that have been released as yet.

Crushing news coming in at this hour that Motörhead’s indomitable leader Lemmy Kilmister has died at age 70. Lemmy had just turned 70 years old on Christmas Eve. Although the band has not confirmed it officially at this time, VH1/Sirius XM host Eddie Trunk released the news online. Trunk and Lemmy were said to be close. Scores of artists have taken to social media to share their grief.No cause of death has been cited yet, but he had dealt with health issues for several years that caused the cancellation of tours and for the first time in the bands history, halted performances. Still, Lemmy along with Motörhead ‘s reputation in the annals of rock, punk, and metal were cemented with over 40 years of great releases and epic touring schedules. The band had toured extensively this year, promoting the August release of their latest album Bad Magic (UDR). We will update with more news as it comes in, and we wish his family, friends and fans our condolences at this time.

UPDATE: The band has released a statement confirming Lemmy’s passing:

There is no easy way to say this…our mighty, noble friend Lemmy passed away today after a short battle with an extremely aggressive cancer. He had learnt of the disease on December 26th, and was at home, sitting in front of his favorite video game from The Rainbow which had recently made it’s way down the street, with his family.

We cannot begin to express our shock and sadness, there aren’t words.

We will say more in the coming days, but for now, please…play Motörhead loud, play Hawkwind loud, play Lemmy’s music LOUD.
Have a drink or few.

Celebrate the LIFE this lovely, wonderful man celebrated so vibrantly himself.

HE WOULD WANT EXACTLY THAT.

Born to lose, lived to win.

There is no easy way to say this…our mighty, noble friend Lemmy passed away today after a short battle with an extremely… 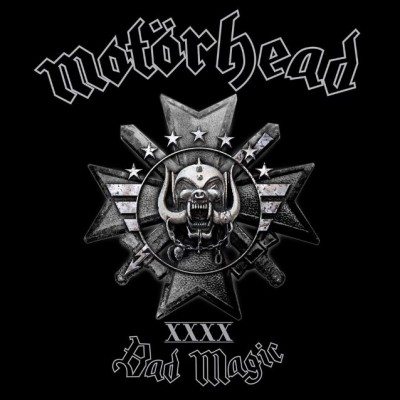