From the beginning strains of ‘Lovely Lovlie’ I was hooked. ZOMG! Can I write that? ZOMG!! I was like, “Duuuuuuuuuuuuude, awwww yeah!” So yes, I really dug it and I was only a minute twenty-two in. So what, humble reader, am I gushing about? Black Space Riders’ Amoretum Vol. 1 (Black Space). This is the must have album of the year and it is still January. There is something primal about the sound of Amoretum Vol. 1. It’s an Earthy, natural sound that resonates in your bones. END_OF_DOCUMENT_TOKEN_TO_BE_REPLACED 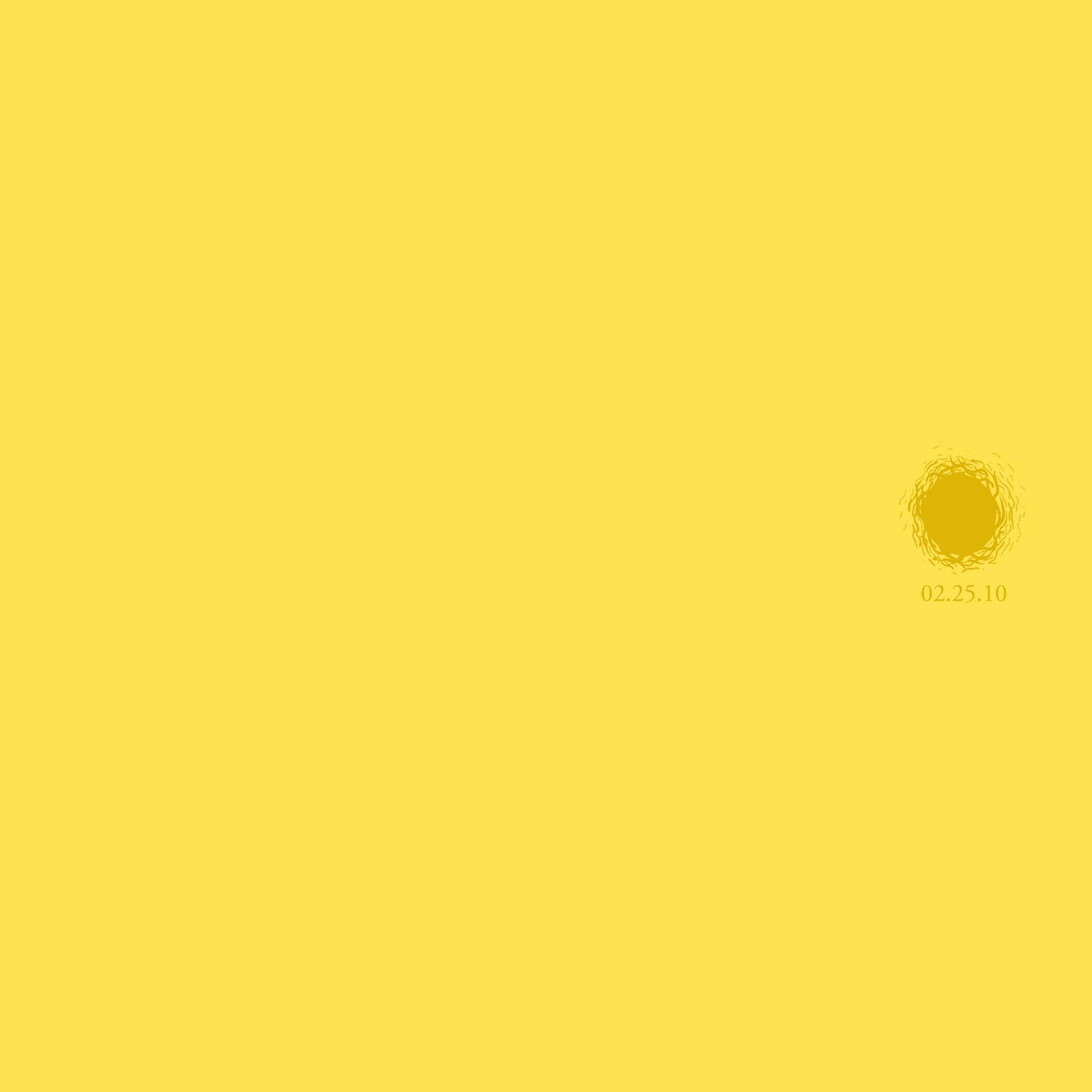 Isis’ Live VII (Ipecac Recordings) is the newest live offering (the 7th in a limited series) from the retired band originally from California, by way of Boston, MA. Technically, the show isn’t new, but the release on Ipecac Recordings is. Recorded on their “farewell tour in 2010, those that were holding their breath for a comeback since then can breathe a brief sigh of relief. Isis Live VII is all that an Isis fan would love and expect from them. END_OF_DOCUMENT_TOKEN_TO_BE_REPLACED 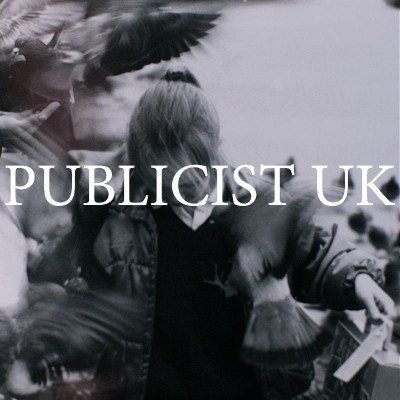 It would be natural to expect pounding rhythms and adrenaline fuelled blasts, especially considering the rhythm section. Only that couldn’t be further from the agenda. Instead gothic post-punk is the order of the day, with the spectre of the late 70s looming largely over the two tracks present here. The sound of the band is decidedly British in its choice of influences, reeking of decaying Chameleons and Fields Of The Nephilim records. “I love it when you talk real politics!” Lipez pines like Andrew Eldritch reciting the works of Fredrik Engels.

Original Demo Recordings (Static Tension) is the kind of effort fans of recent death rock troubadours such as Beastmilk may lap up, although Publicist UK are more retrospective in their style and the reverb and treble heavy production; Spiralling melodies are interwoven amongst the effortless performance of Witte, who provides a solid backbone, largely sitting back to support the song. His pulsing sixteenths accenting every nuance of ‘Slow Dancing To This Bitter Earth’ while Lipez repeats the hypnotic mantra of a chorus over jangling riffs to great effect.

They also use the music as a platform to hit out at faux social rebellion. “Wave a red flag and decorate your handbag” snarls Lipez on the latter number, clearly using it to take a swipe at insincere political campaigners who do much complaining but little to change the systems in which they live.

Since this tempting morsel has been delivered, the group have taken up residence on Relapse Records and are working on a full length. Given the murky depths this release mines, it will be interesting to see if they can progress as strongly as they have started. 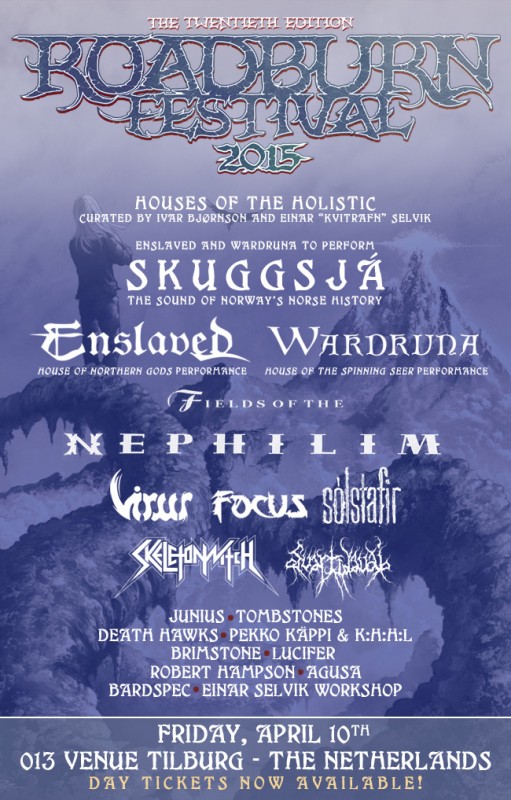 The 2015 Roadburn Festival has announced today that their lineup of musical artists is complete with the Enslaved and Wardruna-curated “Houses of the Holistic” day finalized. In addition to the highly-anticipated performance of Nordic tribute Skuggsjá, added to the bill are Fields of the Nephilim, Virus, Sólstafir; BardSpec (the ambient music side-project of Ivar of Enslaved) as well as performances from Enslaved and Wardruna separately. Ivar Bjørnson and Einar Selvik each commented:

“I’ve got to admit to feeling a streak of melancholy as our ‘Houses of the Holistic’ is completed with so many wonderful bands. It is humbling to have been given the honor of curating the Roadburn Friday, and also it has been a process that has given me a massive boost of belief in, and love for, this music scene that we’re all rambling around in: every invited band has been massively supportive and enthusiastic in accepting our invites. It is also important for me to extend a massive thank you to my two main co-conspirators in this evil planning: Einar Kvitrafn of Wardruna, my co-curator and musical sparring partner par excellence. And then of course Dr. Evil himself: Walter from the Roadburn organization itself – for guiding us through the process and for having faith in our abilities. After all, we are musicians and shouldn’t be trusted with too much grown-up stuff haha! See you all in Tilburg!” — Ivar Bjørnson

“The line-up for our curated Roadburn day is now complete and I personally think it is insanely good! ‘Houses of the Holistic’ will display a broad variety of acts that despite the spectrum of expressions and genres still manage to compliment each other as well as firmly grip to a solid red line. It will also reflect the curators and their past, present and future. A huge thanks goes out to Roadburn, and of course my partner in crime Ivar Bjørnson. It has been a pleasure and honor to work on this so far and the festival haven’t even started!” – Einar Selvik

In addition to Einar hosting a workshop on his creative process, Roadburn 15 features can’t miss events seen nowhere else such as Anathema hosting a career-spanning set, countless other incredible music acts, artists in residence The Heads (Wayne Maskell, Hugo Morgan, Simon Price, and Paul Allen), films, exhibits and much more. Tickets are said to be moving briskly so get yours while they last! 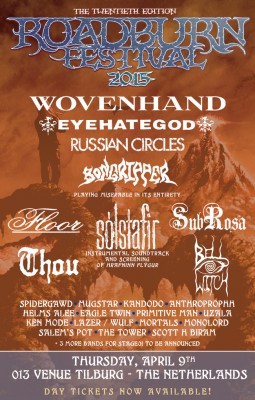 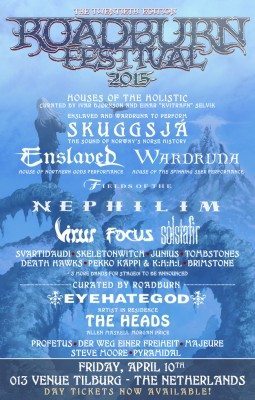 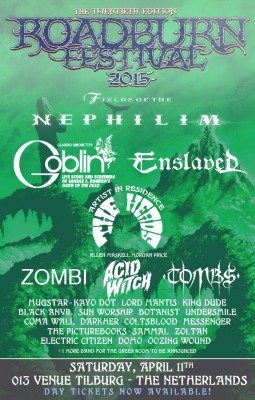 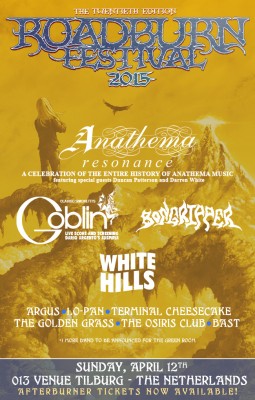 Roadburn Festival 2015 has confirmed its lineup for each day of the event. The festival will run from Thursday, April 9, 2015 to Sunday, April 12, 2015 at the 013 venue in Tilberg, The Netherlands. 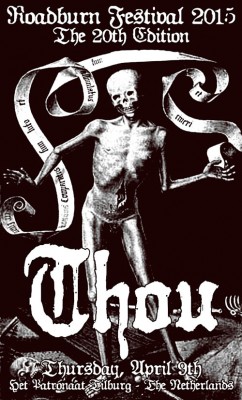 Sludgey doom titans Thou and Horror tinged metallers Acid Witch are among the latest bands announced for Roadburn Festival 2015. They will join the likes of NOLA sludge icons Eyehategod, Prog metal heavyweights Enslaved and doom titans Bongripper at the event in Tilburg, The Netherlands from the 9th April to the 13th April 2015.

The Cinematic Feel of Roadburn Festival 2015; Acid Witch and THOU amongst others confirmed

The 20th edition of Roadburn, set for April 9 – 12 at the 013 venue in Tilburg, The Netherlands, is going to be a treat for those who love soundtracks (and screenings). In addition to Sólstafir performing an instrumental soundtrack to Hrafn Gunnlaugsson’sHrafninn Flýgur (When The Raven Flies), and Mugstar playing Ad Marginem in its entirety, Claudio Simonetti’s Goblin will perform their much acclaimed movie scores for George A. Romero’s Dawn Of The Dead and Dario Argento’s Suspiria at the 2015 festival.

Led by Brazilian-born composer Claudio Simonetti, the band will perform the live scores of Dawn of the Dead (Saturday, April 11) and Suspiria (Sunday, April 12) in real time while screening both movies from start to finish. This will offer our beloved attendees the chance to experience these classic soundtracks and films on the main stage, and in an entirely new dimension.

This will be the first time that these soundtracks will be performed live in The Netherlands, and follow the band’s critically acclaimed performance at last year’s festival, when Claudio Simonetti’s Goblin were invited by curator Mikael Åkerfeldt.

Sólstafir will also take to the main stage for their soundtrack performance (Thursday,April 9), whilst Mugstar will grace the stage of Het Patronaat on Saturday, April 11.

Besides these four special performances, Zombi (aka Messrs. Moore and Paterra) will also open up the stargate and herald the zombie dawn on the main stage of the 013 venueon Saturday, April 11.

Since first hitting the general consciousness with their 2004 debut album, Cosmos, on Relapse, and wowing fans and critics alike with 2011’s Escape Velocity, it could be argued that Zombi were the spearhead for the whole resurgence of interest in obscure film soundtracks, and the music of artists such as Goblin and Fabio Frizzi.

We also have exclusive solo performances from Zombi masterminds Steve Moore and A E Paterra – performing under his Majeure identity – both of whom will be playing on the day before, Friday, April 10 at Het Patronaat.

Clearly influenced by the Euro Horror underground film scene of the 70s (and maybe a bit of the 80s, too), London based Zoltan manage to tread the line between eerie, spine chilling terror and spooky soundtrack-prog perfectly. Their two albums, beautifully recorded in full analogue glory, stand in testament to their musical prowess.

On the banks of the Mississippi there dwells a ferocious beast with an open third eye that, when you look in it, shows you the parts of yourself you wish you could forget. THOU have been haunting Baton Rouge, Louisiana, and just about everywhere else on tour for the better part of a decade, bringing a consuming, atmospheric brand of sludge that challenges you to experience this moment for everything it can be, to cast off repression in all of its forms and become the complete self of whom you’ve always been most terrified.

Their 2014 album, Heathen, is the latest in a long string of releases (4LPs, many EPs and splits) on Gilead Media through which THOU have preached this vicious gospel in churning riffs and throat-searing screams. Their propulsive force coincides with their philosophical approach to lyrics, and in combination with the depth of their ambience and the all-encompassing volume of their delivery, THOU’s sound gives sludge its most original interpretation in years.

Open your eyes and exalt as THOU take the stage at the 20th Edition of Roadburn Festival on Thursday, April 9 at Het Patronaat in Tilburg, The Netherlands.

Constantly pushing the limits of sound with an arsenal of self-modified instruments,Germany’s The Picturebooks tap into buzzy blues and glorious garage rock territory on Imaginary Horse, their super infectious debut lp for RidingEasy Records. Mirroring their daredevil skateboarding ethos and easy rider antics, The Picturebooks will rev up their howling engines and conjur true fire at Roadburn 2015 on Saturday, April 11 at the 013 venue.

The Golden Grass will bring their sunshiny harmonies and positive vibe the 20th edition of Roadburn Festival on Sunday, April 12 at the 013 venue. The Brooklyn trio released some of the best upbeat psychedelic rock with their self-titled album on Svart Records, and after their first European tour this Fall, we’re happy to welcome The Golden Grass to Roadburn in 2015 as they bring out new material and a classic sound.

Taking the best parts of hardrock, psychedelic rock, caveman boogie, and amplifier worship, Uppsala Sweden’s four-piece The Tower will put forth their heavy 70s loyalism at Roadburn 2015 on Thursday, April 9 at the 013 venue, pushing the outer limits of an already spacious genre.

Curated by Ivar Bjørnson (Enslaved) and Wardruna‘s Einar “Kvitrafn” Selvik, Roadburn Festival 2015(including Fields of the Nephilim, Skuggsjá, Enslaved, Wardruna, Claudio Simonetti’s Goblin performing Dawn of The Dead and Susperia in its entirety, Zombi, Sólstafir, White Hills, Bongipper,Floor, Eyehategod and The Heads as Artist In Residence among others) will run for four days from Thursday, April 9 to Sunday, April 12 at the 013 venue in Tilburg, The Netherlands.