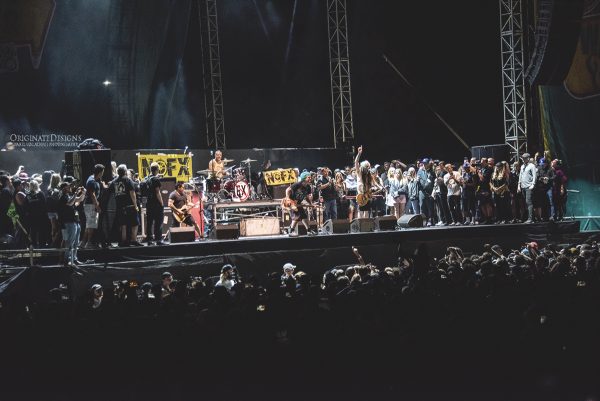 Do you remember where you were the first time you ever went to Vans Warped Tour? A lot of us do! This year’s final farewell to twenty-five years of amazing music and shared experiences came to a close with some of our favorite Warped Tour artists, old and new, and it was a heartfelt goodbye. Ghost Cult Magazine got a chance to cover the Mountain View, California Warped Tour to celebrate with the most nostalgic of performers. END_OF_DOCUMENT_TOKEN_TO_BE_REPLACED 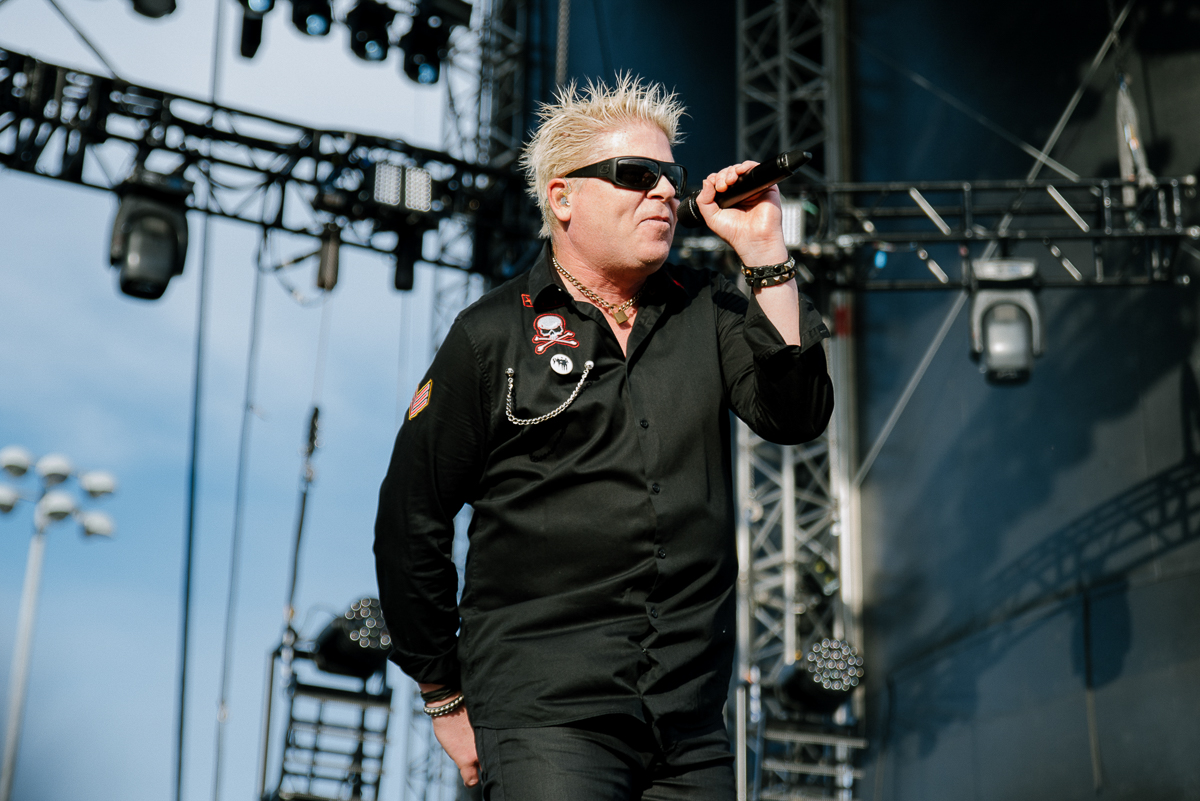 The final Warped Tour event, or at least the final one for now, begins in a few hours in San Manuel, California. Paying respects on the twenty-five-year history for the festival Kevin Lyman build and nurtured, the final two-day celebration will showcase of the tour’s iconic culture. Fifty bands will play on dozens of stages and returning big-name bands are fan favorites like Bad Religion, Circa Survive, Frank Iero, Less Than Jake, Save Ferris, Simple Plan, Sleeping With Sirens, The Offspring, The Starting Line, Thrice, We The Kings, and more!

END_OF_DOCUMENT_TOKEN_TO_BE_REPLACED 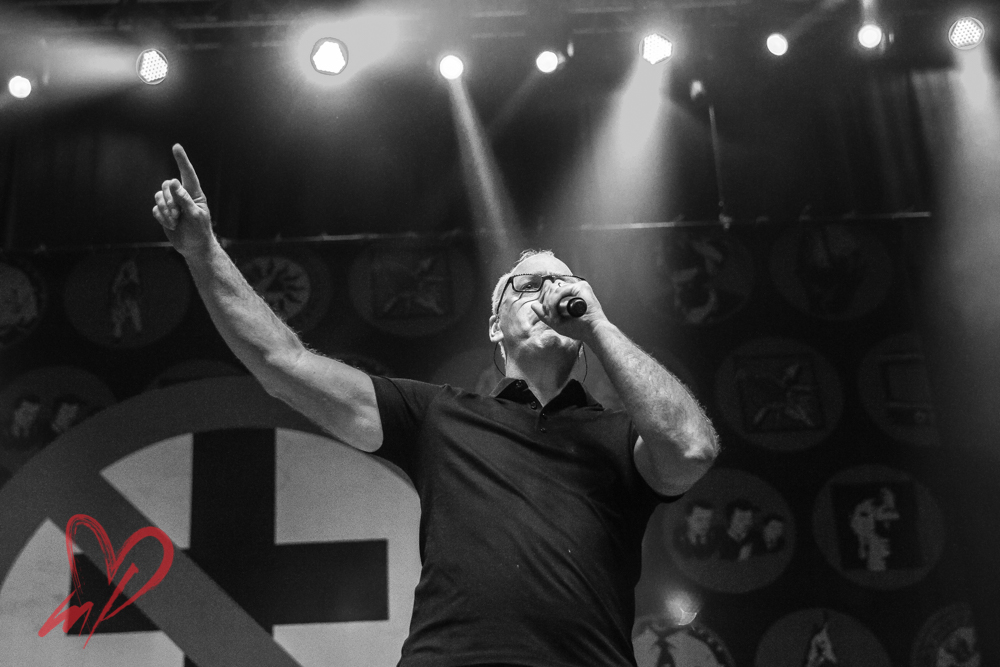 In grand style, Vans Warped Tour will not only honor their twenty-five-year history, but they will also put a face on their bold future of all live music events with their bi-coastal 25th Anniversary events that celebrate the final showcase of the tour’s iconic culture. The unique music experience will stop in three locations including Cleveland, Ohio, Atlantic City, New Jersey, and Mountain View, California and caps off 25 years of history of the Vans Warped Tour. Fifty bands will play on dozens of stages and returning big name bands are fan favorites like Bad Religion, Circa Survive, Frank Iero, Less Than Jake, Save Ferris, Simple Plan, Sleeping With Sirens, The Offspring, The Starting Line, Thrice, We The Kings, and more! Each stop on the tour will have distinctly different lineups from across genres. Tickets on sale day at the link below. END_OF_DOCUMENT_TOKEN_TO_BE_REPLACED 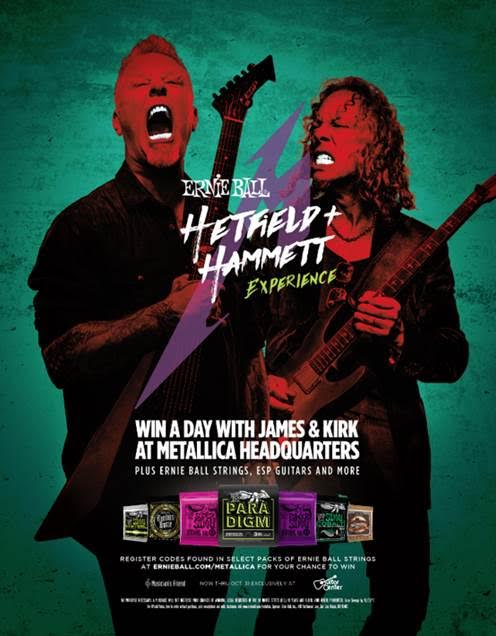 Ernie Ball, along with Guitar Center and Musician’s Friend, have launched a concert sure to please any Metallica fan (or any music fan really), the Hetfield + Hammet Experience. Offering a once-in-a-lifetime chance to Fly to Metallica HQ and hang with the legendary guitar duo. Details below. END_OF_DOCUMENT_TOKEN_TO_BE_REPLACED 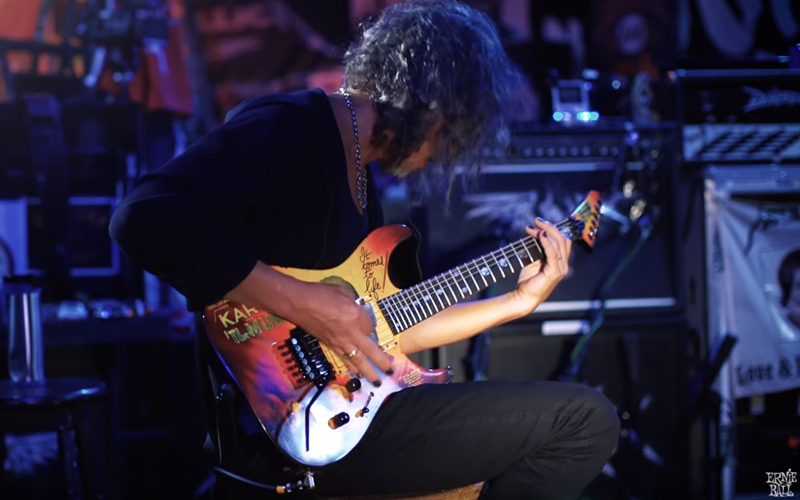 Ernie Ball‘s String Theory series features in-depth interviews with musicians from all genres of music. The latest episode focuses on Metallica‘s Kirk Hammett, and the legendary guitarist opens up like never before. END_OF_DOCUMENT_TOKEN_TO_BE_REPLACED 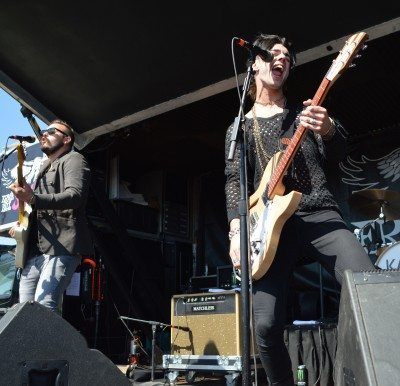 Rock music in the New York City area was once engrained within their DNA, as history has spawned a number of once promising acts within the music scene and made that region a desired destination to launch many artists’ careers at one time.

After years of crafting their sound and fine tuning their songwriting skills, The Karma Killers are taking their music onto the road and sharing their music with the masses. They have released their debut EP Strange Therapy via Island Records and have been playing every day this past summer on the Vans Warped Tour’s Ernie Ball stage to lots of new yet enthusiastic fans on each tour stop.

“It’s been fantastic. It’s been really great,” says frontman and guitarist Micky James, about their touring experience. “The kids have been very receptive so far. It’s been hot. We’re getting into the groove of things and the swing and becoming really awesome. I can’t wait until we work on the rest of the tour.” 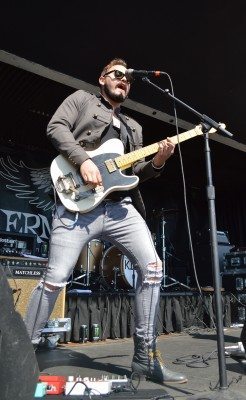 Their band name came together by sheer accident and evolved from there. Taking musical influences ranging from David Bowie and the Cars to Billy Idol, U2, and The Ramones to a variety of new wave and classic punk rock, they began to build a foundation of what is heard on their ep.

“Billy (Stevens, guitars) had this name Killing Karma at first and then we talked about it. We thought it was a cool name, but we wanted to throw in a “The” in front of it. We wanted it to be like The Rolling Stones. Micky was like ‘what about the Karma Killers?’ It was that simple. We all thought it sounded good. We were strangers at the time. We had just met. It was the first or second night we had met each other and we walked away with a band name,” said bassist Mango.

“I liked how it had a meaning to it. I see a lot of bands that don’t have that kind of thing to it any more. I thought it was cool. That’s what I was drawn to,” added James. 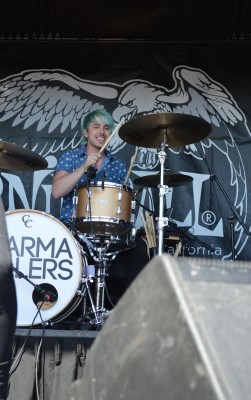 So what was their reaction to how they fit into this year’s Vans Warped Tour lineup, considering they are not either pop-punk, screamo or any of these other subgenres that this tour is well known for featuring every summer? “I mean a lot of the bands here seem a little different from us…but it’s cool. We feel like there’s a bunch of different bands out there. We like that,” said James.

The real surprise came where they had some fans who were familiar with their material on some of the earlier stops across California, where the Vans Warped Tour began. Plus the irony of it all is the band had never played anywhere on the West Coast prior to this moment.

“The past two shows there were actually kids actually knew the words. I was completely shocked. This is so new to us. Even kids knowing our band name is or knowing the words is incredible,” said James.

“It’s crazy. We’re literally on the other side of the nation from where we come from and where we’ve always been playing in New York City. To be in California and see even one or two people that are aware of the band’s existence, it’s awesome,” added Mango.

Within a relatively short period of time, The Karma Killers grabbed attention within their own area through their songwriting and strong live shows.

“We started in 2012 in New Jersey. I was starting off writing a bunch of songs as a solo artist and this guy I was recording with, I was looking for a band and he knew our guitar player and was introduced to Billy [Stevens]. Billy knew Mango [bassist], and a couple days after that we were writing songs and it instantly clicked. We found the name of the band from there. We wrote a bunch of songs. We played in New York City for years. Just breaking our backs trying to be a do it yourself rock n roll band. We took some steps and now we’re here.”

“I’ve been in bands since I was ten, kind of like hardcore bands in New Jersey. Then I started writing songs when I was 18. My old band fell apart and I was looking for something else and something new, and this fell in my lap. It was a blessing,” said James.

But Mango shared the moment where the band knew they had something special and made the band click. After sifting through songs James had written on his own, they knew that they were into something that could make the Karma Killers special.

“Actually he had on his own did a demo track, I guess you could call it. When Billy and myself heard it that is what started the band. We got wind of that song and that track, and we loved it so much, we thought it was great. From there we got together and we kind of molded it together as a solo artist, but it eventually took on its own life. It really became the Karma Killers after some time.”

Lastly, being on their first tour, the Karma Killers have faced a learning curve towards necessities of life on the road. “Three days without showering was definitely interesting. We ran out of water on our van wagon,” said Mango, boldly sharing his Warped Tour moment.

“At the first day in Pomona, I had to shower at the amphitheater and I forgot my towel. So our tour manager Christian, who is the man, gave me paper – pieces of paper you’re supposed to put down on a toilet bowl. I dried myself with that! It’s probably the worst shower I’ve ever had. At least I took a shower. For me that’s my most interesting moment.”

“Now we know we’re going to keep that tank filled with water, so we can shower every day.”

Rock On the Range has added more musical acts, as well as adding the ROTR Comedy tent and the 2015 Ernie Ball presents the Rock On The Range Battle Of The Bands for the ninth annual event, held May 15, 16 and 17 in Columbus, OH.

The Pretty Reckless, Tremonti, Vamps, The Danger Kids, and Highly Suspect have been added to the list of musical acts performing.

The current Rock On The Range music lineup is as follows: 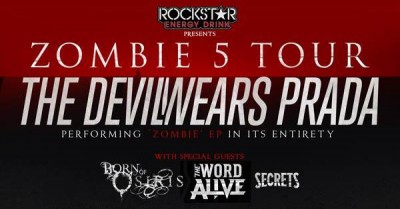 The Devil Wears Prada is headlining a spring tour of North America with Born Of Osiris, The Word Alive and Secrets taking part on the “Zombie 5 Tour.” TDWP will be performing their Zombie EP in its entirety each night.

Prior to the tour, The Devil Wears Prada will be headlining The Fonda Theatre in Los Angeles, CA on January 19, 2015 for the Ernie Ball BOTB finals. 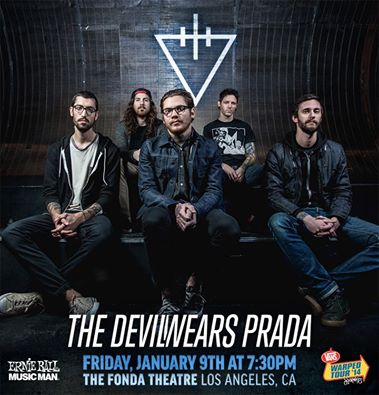 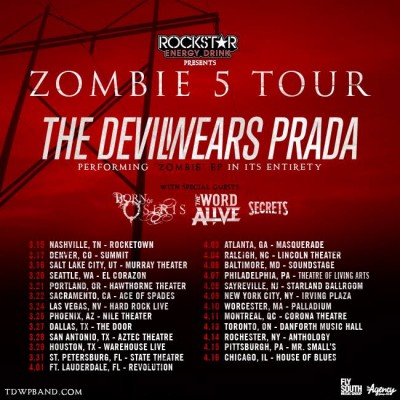