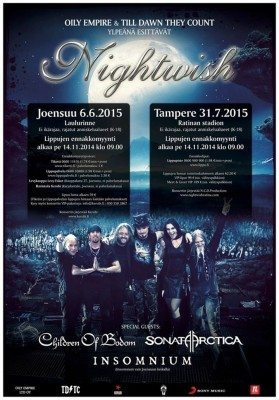 Nightwish has been positively killing it in 2015. With their recent album Endless Forms Most Beautiful (Sony/Nuclear Blast), the band continues to bring their immaculate stage show to their global fan base. Following a sold-out US tour, Nightwish has been touring Europe this summer and nested back home for a massive show last weekend at Ratinan Stadium, in Tampere, FI. Holding upwards of 32,000 people, with a huge crowded soccer stadium, Nightwish’s evocative symphonic-influenced metal is a transcendent experience for the fan. The band took full advantage for their theatrical talents on this night, as if they play in this type of venue every day. Maybe they should! They were joined for this special occasion by their countrymen Children of Bodom and Sonata Arctica, for a tremendous bill. Captured here for Ghost Cult by Pekka Konttinen Photography, you can see what you are missing out on if you don’t live in Europe. 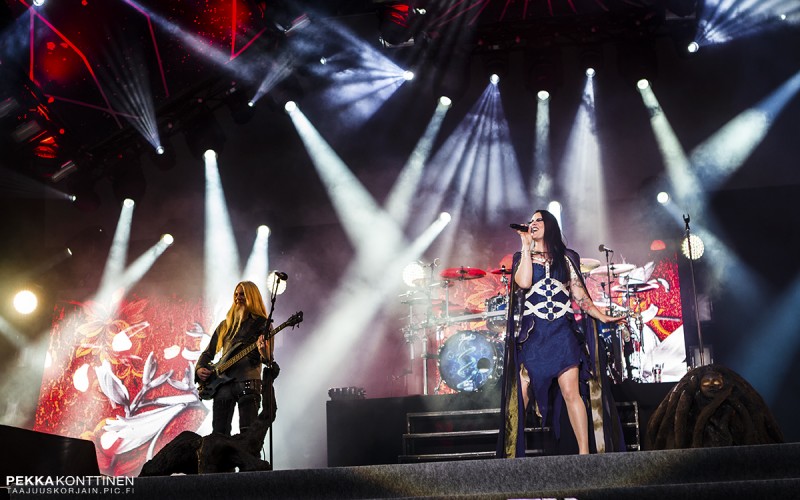 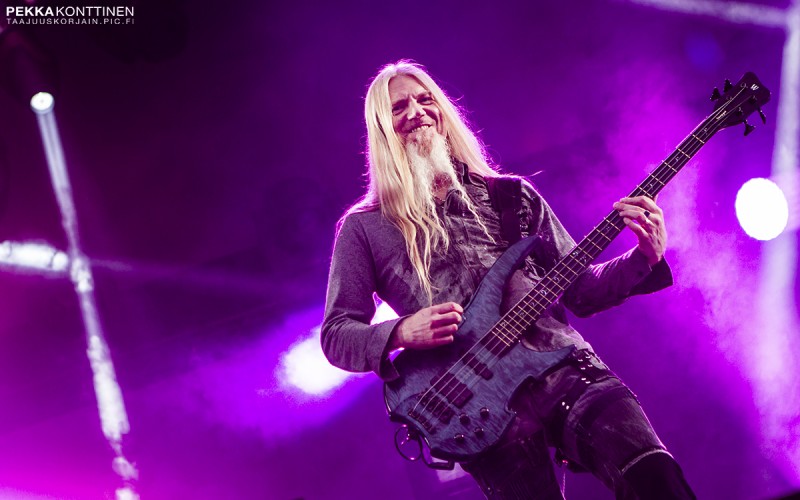 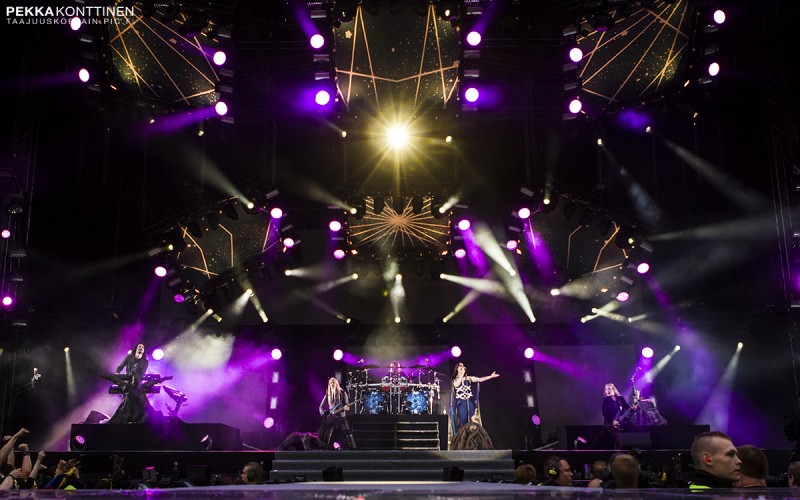 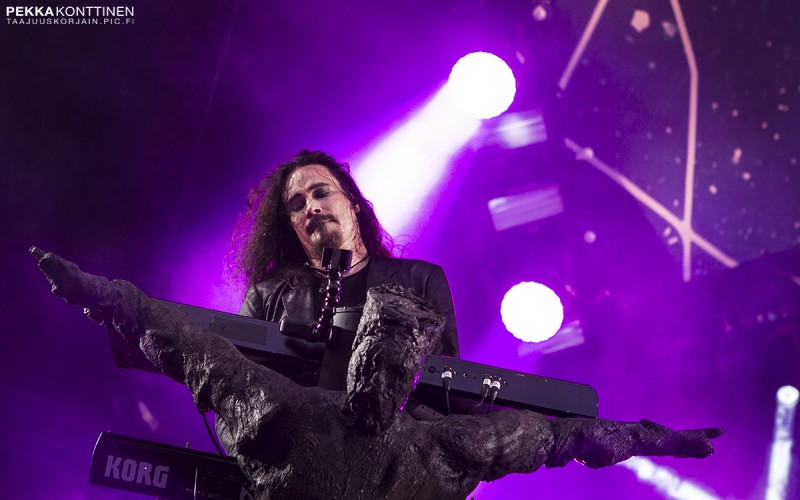 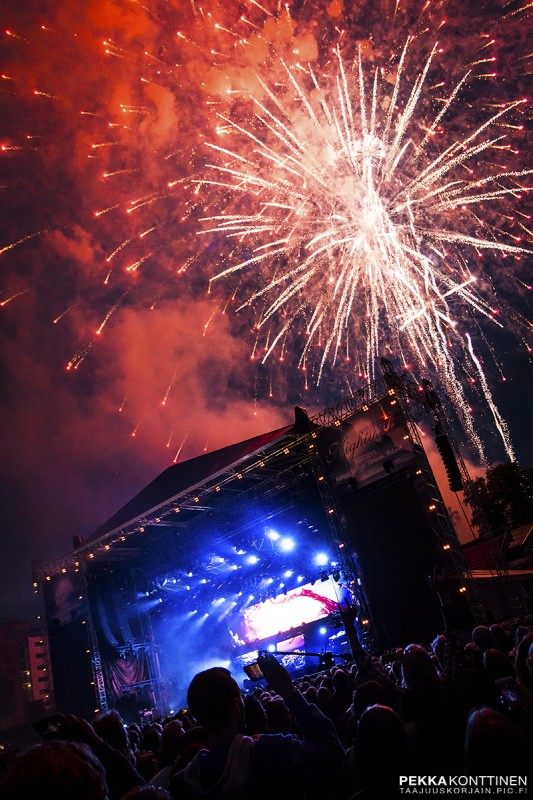 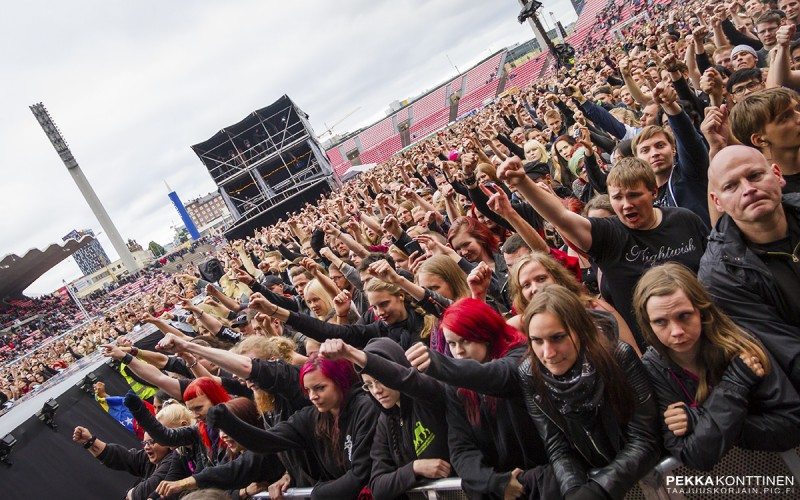 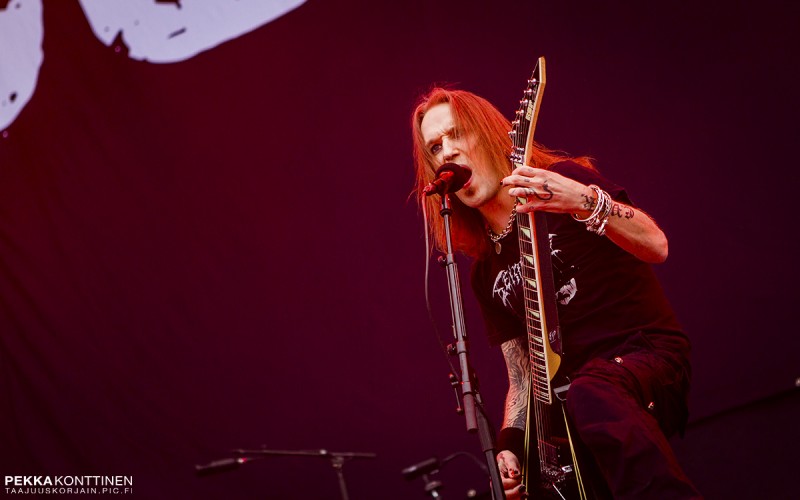 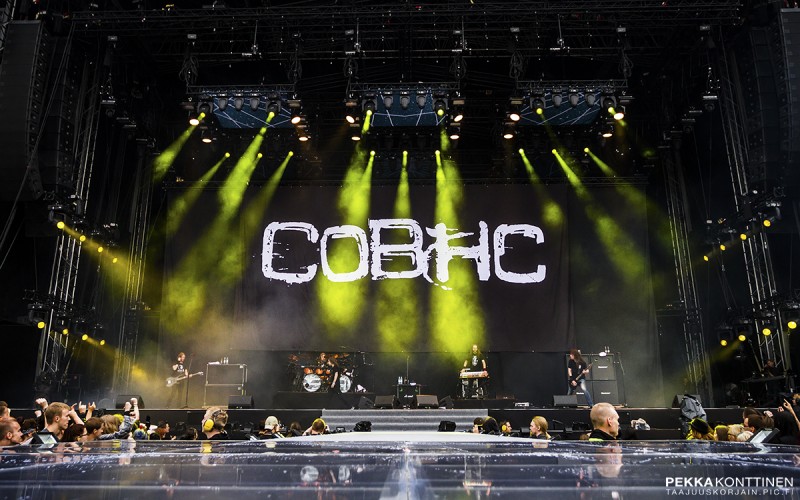 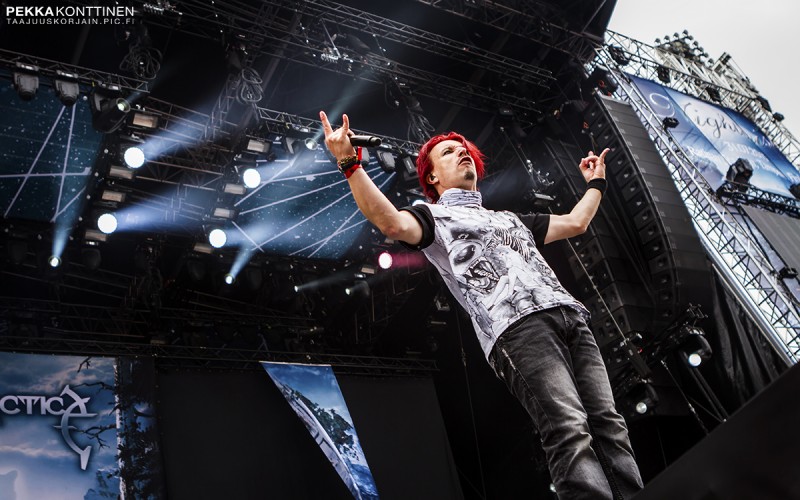 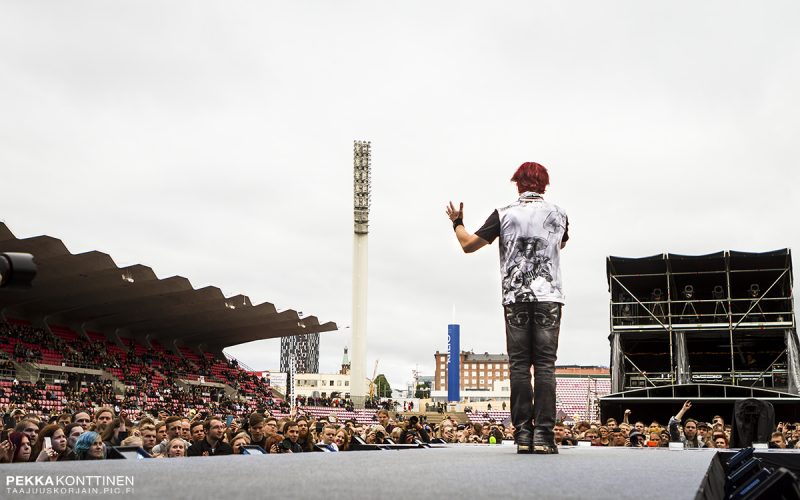 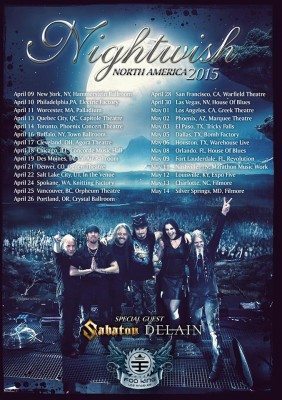 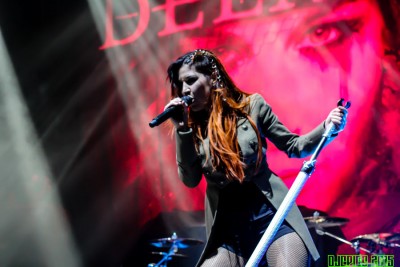 The night was started off right by Delain from the Netherlands. This is also my 1st time seeing and hearing them and boy was I blown away. Charlotte Wessell’s voice is so soothing and the music is equally as catchy, they just got a new fan right here. When the lights turned down you knew who was coming up next by the massive chanting of “Sabaton! Sabaton!” Like an invasion they swarmed the stage and infected everyone with their barrage of Swedish power metal. This is one of the most in energetic, cardio-driven bands I’ve seen. It’s like watching four Bruce Dickinson-s running around on stage. Near the end of their set vocalist Joakim Brodén took a moment to call to attention a young kid in the front row. The 10 year old kid named Freddy was brought on stage received his own “Freddy!” chant. It was his second show and his parents allowed him to stay up on stage with them for their final song ‘Metal Crue’ while wearing Joakim’s trademark sunglasses. I think Freddy will be forever spoiled now! 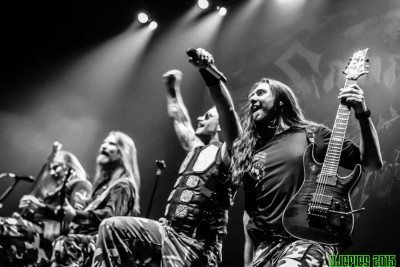 The stage at the Hammerstein Ballroom in New York for Nightwish was covered in what looked liked ash figures and burned out trees. It was a visual site that added even more atmosphere to the set list that leaned heavy on seven songs from the new album Endless Forms Most Beautiful (Nuclear Blast). Opening ‘Shudder Before the Beautiful’, Floor Jansen had the crowd singing along to the new songs as if they were older ones. After a few newer ones they pulled out fan favorite, ‘Amaranth’. Tuomas Holopainen composes some of the best arrangements I’ve ever heard and watching Emppu Vuorinen play guitar makes you want to play too. They both bring nothing but smiles of joy. To make the show even more special, they brought out ‘Sleeping Sun’, which bassist Marco Hietala says they haven’t done ever live. The vocal harmonies between Floor, Marco and Troy are marvelous on ‘Elan’ and ‘My Walden’ were superb. It was also the first show with new/fill in drummer Kai Hahto of Wintersun and of course Rotten Sound fame. He was flawless and you can see why Jukka Nevalainen tapped him to help out. 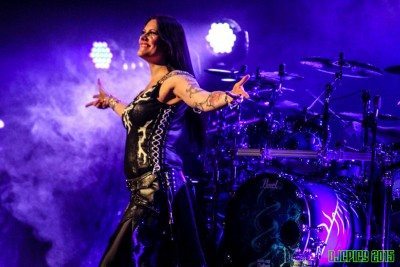 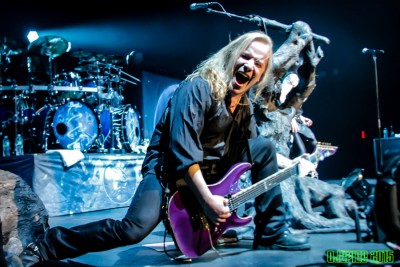 The ending of the show was enormous ‘The Greatest Show On Earth’ and my personal favorite ‘Ghost Love Score’ felt so grand I was left in awe. The crowd just ate up the roller coast of emotions these songs gave off. Finally ending the seventeen song night was ‘The Last Ride of the Day’. You really wished they had time for another ten songs. Plus the whole set was book-ended by spoken word pieces from Richard Dawkins. If this show is the benchmark, then the rest of the country and the world are going to love this tour. Just remember, New York was here first. 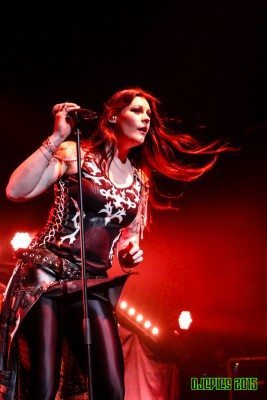 WORDS AND PHOTOS BY OMAR CORDY 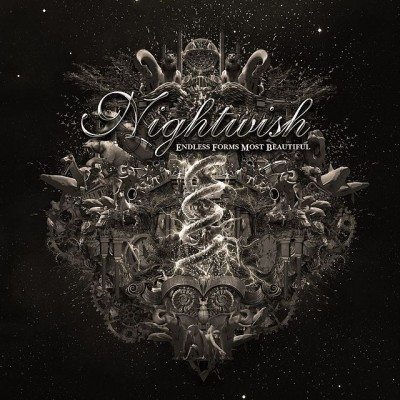 Nightwish, the rulers of symphonic metal have returned and are ready to take over the world with their new album Endless Forms Most Beautiful (Nuclear Blast). This much anticipated album is the first studio album with not only Metal queen Floor Jansen on vocals, but also Wintersun drummer Kai Hahto, who took over when long-time drummer Jukka Nevalainen had to drop out due to health issues.

Composed primarily by Tuomas Holopainen, the sound on this new album hearkens back to the old Nightwish but one major difference is the vocal performance given by Floor. While she is fully capable of the high operatic capers we know from former Nightwish vocalist Tarja Turunen, there is little of that on this album. Instead, we get to enjoy her full range of power and emotions, from very small and sweet vocals on ‘Élan’ and ‘Our Decades in the Sun’, to the intense and distorted power in ‘Yours is an Empty Hope’. In fact, this album shows an even greater range than her own projects (After Forever, ReVamp) have done.

The album also contrasts with previous Nightwish works in subject matter; while Imaginaerum (Nuclear Blast) dealt with the world of the imagination, this album describes the beauty of the natural world. In fact, the album title is a quote from Charles Darwin’s On the Origin of Species.

‘Élan’ is the first single and video for the album, even though it is one of the softest songs on the album; Troy Donockley’s whistles give the son a Celtic vibe, and Floor’s vocals are sweet at first, however, this sweetness does not last the whole song, since towards the end a very pleasing modulation brings more powerful vocals. It might not be the song most representative of the album, but it is beautiful and driven. On the album ‘Élan’ is followed by ‘Yours is an Empty Hope’, a song that brings all the bombast one can hope to find in a Nightwish song. The heavy guitar riffs are supplemented with an excellent orchestra and choir, and it is the heaviest song on the album. Floor totally rips on these vocals, and it a very intense song to experience. Tuomas’ genius as a composer is demonstrated by the contrast between this and the next song, ‘Our Decades in the Sun’. Despite the gentility of this song, with ethereal choir song and such sweet vocals by Floor, the song still doesn’t fall flat, has an astounding energy for a song so serene, and is definitely one of my favourites from this album.

‘Weak Fantasy’ is epic, the title track is very catchy, and ‘Edemah Ruh’ is very smooth. However, there is one song that stands apart from anything Nightwish has ever produced, namely ‘The Greatest Show on Earth’. This is the last song on the album, and lasts a staggering 23 minutes 58. There is no real good way to describe this song, other than as varied as nature itself; it has operatics, power vocals, narration, and instrumental sections and varies from intense piano to orchestral masterpieces, to heavy metal.

Trying to pick out highlights form this album is like trying to pick needles out of a stack of predominantly needles. There may be an occasional pin, depending on your personal tastes, but there is not a strand of hay in sight. 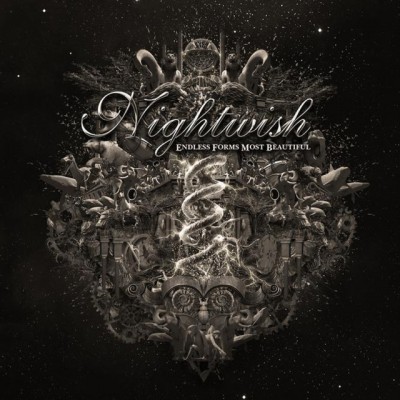 Nightwish have announced a video contest for their fans to cover their new single ‘Élan’. The song is from their forthcoming album Endless Forms Most Beautiful, releasing on March 30th from Nuclear Blast.

This contest ends on Thursday, April 10th. Winners will be announced on April 16th, 2015. 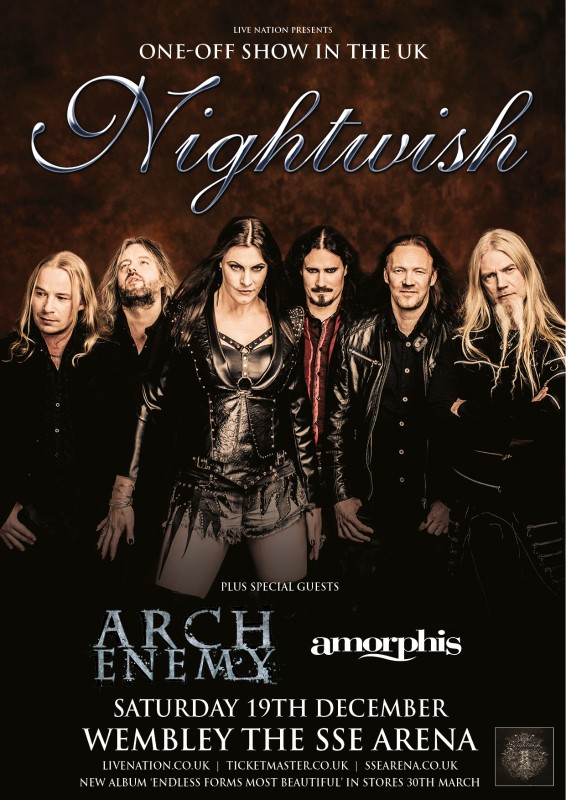 With their hotly anticipated eighth album Endless Forms Most Beautiful, the first to feature new vocalist Floor Jansen (ex-After Forever, ReVamp), due out on March 30 via Nuclear Blast, Finnish symphonic metal band Nightwish have announced their most significant UK appearance to date, confirming they will be headlining a one-off exclusive show at the prestigious Wembley Arena on Saturday December 19.

The show sees the band become the first Finnish act to headline at the venue.

Mainman Tuomas Holopainen had this to say: “Who would have thought about headlining at Wembley Arena one day when we were starting our UK touring history from the downstairs of the legendary Astoria Club in London over ten years ago. This truly is a dream come true for us !”

Support comes from two big hitters in the form of Arch Enemy and fellow-Finns Amorphis.

Tickets go on sale this Friday 13th Feb at 10am and will be available here:
http://www.livenation.co.uk/artist/nightwish-tickets 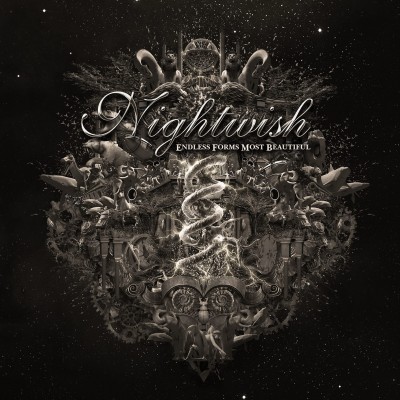 Endless Forms Most Beautiful can be pre-ordered via Nuclear Blast here.