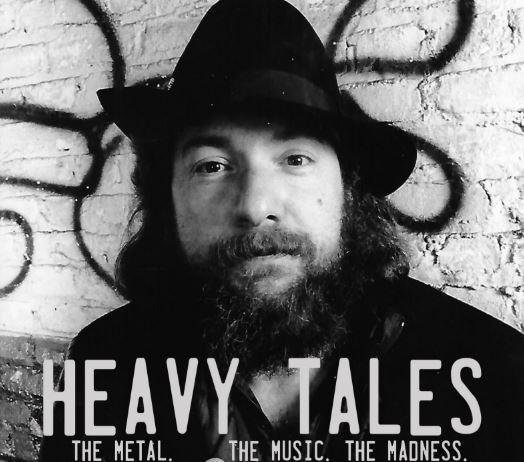 I wish I could say I knew Jonny Zazula back in the day, but I wasn’t quite old enough. Sure, I had heard all the stories. As a major Metallica and Anthrax fan, Jon and his wife Marsha’s life stories are Metal history as much as any riff, album or chorus. I bumped into Jon about twelve years ago at Starland Ballroom in New Jersey. I was there to see a Testament headline show. Jon and Eddie Trunk, who owes his career to Jon and Marsha to an extent, walked right by and I totally fanboyed out. I’m pretty sure I blurted out something lame like “Holy shit, Jonny Z! Thanks for everything!”, since that what was in my heart. He gave me like a half-pat on the arm, half a “hey dude I need to get by you” move and slipped past me on his way backstage. Trunk just smiled. That was my in-person brush with him, until a recent phone interview (coming soon) for this book release. The book is a memoir about an enterprising music lover who put a genre or two on his back and raised up everyone around him toward greatness.

END_OF_DOCUMENT_TOKEN_TO_BE_REPLACED 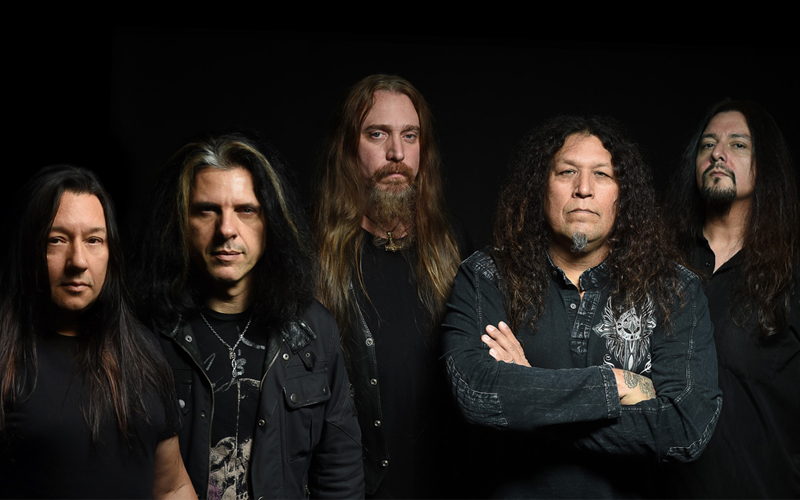 It’s the hottest day of the year so far in London and before you start imagining a lovely picture of a sundrenched European capital with happy citizens, joyfully going about their business, well, think again. The heat is cloying and claustrophobic; offices without air conditioning units become like bakers ovens. Everyone is sweaty and grumpy. Everyone it seems with the exception of Testament’s lead vocalist and driving force Chuck Billy. END_OF_DOCUMENT_TOKEN_TO_BE_REPLACED 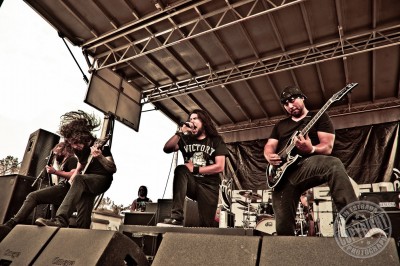 The past year for South Texas metallers Shattered Sun has been anything but dull. Being one of the hardest working bands has landed them onto the Rockstar Mayhem Energy Drink Festival’s side stage this past summer. They have been out touring behind their debut album Hope Within Hatred (out now via Victory Records). 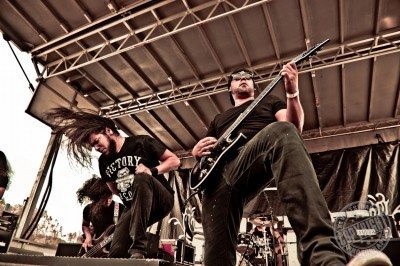 They had just completed their first “real” tour supporting Testament and Exodus across North America, and unlike their previous DIY style tours supporting club sized acts, they learned quickly the wrong and right ways of surviving on the road.

“The last one we were with (Testament/Exodus) – that was a real get up and go,” explained drummer Rob Garza. “We were still learning and now we’re way more focused and way more on time. We’re trying not to get on anyone’s bad side especially we don’t mess up too much,” he said, about the quick learning curve.

Testament frontman Chuck Billy is no stranger to the Shattered Sun camp, as he is one of their co-managers from Breaking Bands LLC and has been mentoring the guys over the past year.

“[We’re] basically learning how to do things the right way. When we first got on the Testament and Exodus tour with them this past April, we were all fan boys over Testament and Exodus, but then Chuck’s biggest role in the band is as a mentor. He could just say ‘just relax…we’re all here as a team. We’re all family on this tour and every tour you’re gonna be on. These are your peers,’ “ he said.

“We’ve got him to calm us down the fan boys in us. Also outdoing each show – we had a decent show yesterday. Today we did better so basically we keep on pushing so we put on a better show every day.” 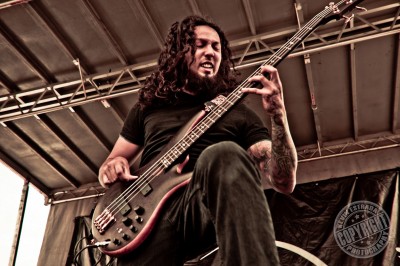 Already from the Mayhem Fest they have gone from performing in from a largely older crowd to a younger demographic that leans towards the newer style of bands featured on the Victory Records side stage.

“The guys and myself were talking about that yesterday. Even the bands that were on tour – no disrespect to Testament and Exodus – they’re more of our age group. You go with the Testament and Exodus and it’s strictly that thrasher crowd. There’s nothing wrong with that. On this one, you have that all around, different genres of music collectively. It’s a different feel. We like it. We’re digging it.”

While the band’s sound comes from the heavier side of metal and their band name is a modified version of an Unearth tune, Garza spoke about their range of influences that helped shape their overall sound.

“When we first started jamming, our guitarist Daniel [Trejo] named our band after an Unearth song ‘Shattered By The Sun.’ So he was really into Unearth and still is to this day. We all are,” he said.

“We try to stick with melodic metal and keep it thrashy, and we’re all fans of other genres as well. One of my favorite drummers and bands of all time is the Foo Fighters’ Dave Grohl and Taylor Hawkins. I try to incorporate as much groove into our thrash beats. It’s a combination of a lot of stuff. It’s like ‘I was listening to this today. I want to try to see how this would sound on this song.’ “

“On this album, we tried to cover all grounds because where we’re from, everyone in our area is real biased. We’re not heavy enough for the hardcore kids or we’re not soft enough for the older crowd. We just wanted to make a CD and just bring as much of everything in. We get known as bands that plays a lot of different kinds of music. We just try to throw it into one thing so we try to cover everyone’s demographic on that one.” 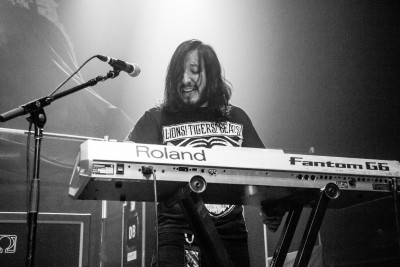 Being on the road, Garza and the Shattered Sun members have experienced many different things but also being from a small Texas town, they also found new and unusual things.

“I believe it was on the last tour, we were in South Carolina and they were selling roasted peanuts. It looked weird, just there in a jar staying warm. Just small things like that that freak us out. But we Google what it is and say ‘uh ok…let’s try it out.’ “

“What I wanted to do when we were in Canada, I wanted to go to McDonalds and see if they had the Royale With Cheese. I didn’t get a chance to do that. I’m trying to cram a bunch of different things into my demographic right now.”

Plus the rare time off of the road has given them time to enhance their road home known as their van. While they have accepted the fact that they will be calling it home for the next year, they have slowly made moderations to it.

“This time we’ve actually built a bunk in our van. ‘OK what can we do differently?’ We’ll probably try to put another bunk in there, a shoe rack, because right now everybody’s shoes are thrown all over the place. We even have our inverter so we routed our power strips so we can charge our phones in the back. We’re learning tour by tour.” 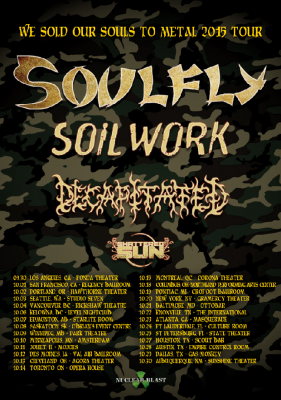 All of the touring experience has now landed them an upcoming North American tour supporting metal heavyweights Soulfly, Soilwork and Decapitated. Garza himself is excited about the upcoming tour but has his eyes on meeting another drumming idol.

“I’m actually really pumped because one of my favorite drummers is Dirk Verbeuren from Soilwork. On our last tour, we had Gene Hoglan and Tom Hunting, and on this tour we’ve got Paul Bostaph and Vinnie Paul, and the next tour I’m going to have Dirk Verbeuren. To be on the same tours as these great drummers is amazing. I’m looking forward to picking that guy’s brain. Getting to tour with Soulfly – those guys are legendary. We all grew up listening to them.”

Learning from past mistakes, Garza admits he is trying his hardest not to have a Wayne and Garth’s ‘I’m Not Worthy’ moment on this upcoming tour.

“Deep down we have, but then it’s like be cool. On the outside, we’ve got to play it cool. On the inside, I’m crying a little bit.”

He admits there is one stop on the upcoming tour he has his eye on.

“I’m just waiting until we get to Milwaukee so I can say ‘it’s pronounced Mil-WAKEY’, from Alice Cooper on Wayne’s World Part 1.”