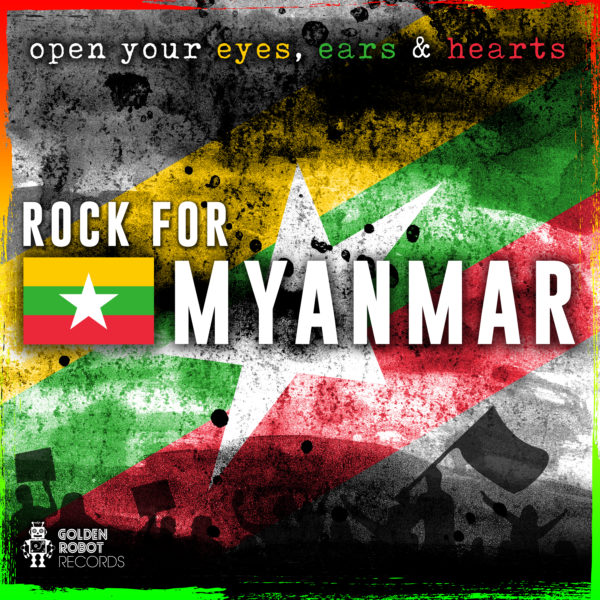 Golden Robot Records has released a new charity album made up of artists from their excellent roster of artists. Rock for Myanmar features tracks from Riley’s L.A. Guns, Hot Chelle Rae, Filter, Ella Fence, AshenMoon, Vanilla Fudge, Hookers & Blow, Phil X & The Drills and a lot more. Myanmar – the largest country in Southeast Asia, has been under a military coup since February this year. A portion of all proceeds will go to Care.org and their long term projects helping woman and girls directly in Myanmar and to the future planning of joined collaborations with Aung La N Sang to support the people of Myanmar, in partnership with Golden Robot Global Entertainment. Rock for Myanmar follows their highly successful #RockTheVax charity compilation released last summer. You can stream and buy the release now at the link below. Hear from Aung La N Sang about the comp.

Aung La N Sang is the first ever Burmese world champion who found fame in the West – Myanmar sporting champion, his organisation sponsors young up and coming athletes. Thrilled this initiative seeks to shine a light on his country in turmoil, La N Sang explains, “It’s very humbling when an international record company like Golden Robot Records reaches out and wants to collaborate on such a meaningful cause like ‘Rock for Myanmar.’”

With the removal and imprisonment of elected Government officials earlier this year, the nation of Myanmar has been in turmoil. The military has stripped the country of democracy and basic human rights such as access to the internet (and hence the ability to communicate globally) along with expressions of art, so after #ROCKTHEVAX spearheaded the label into the public social sector, Golden Robot Records (GRR) is now offering a voice to the 60 million people who have had theirs silenced.

Drawing on the influence of GRR as a global record label with an impressive catalogue of artists, GRR are proactively seeking societal initiatives to engage their platform and artist-base to empower humanitarian causes that are meaningful to the team, and Myanmar became of particular interest, as the international company has staff members with deep-rooted family connections to Southeast Asia.

“Our goal with this initiative is to simply raise more public awareness in the west (US/UK/AU) starting here at home in Australia to help highlight the atrocities that are taking place on a daily basis,” explains GRR CEO, Mark Alexander-Erber. “Many innocent men, women and children have been displaced, orphaned, imprisoned and countless lives have been lost. With current Golden Robot employees having parents and relatives from Myanmar and our head of production currently working with multiple high profile Burmese professional athletes on various media projects, we personally feel that it’s a cause that needs more reporting and quite honestly has been under-reported by major media outlets around the world, but particularly in Australia. Our intentions are clear, we will be raising awareness not from a political stance but from a human stance. Company-wide, from our offices to our artists, we all #RockForMyanmar”

Rock for Myanmar is available now via Golden Robot Records and is available to listen/buy here https://smarturl.it/GRGE-Rock4Myanmar