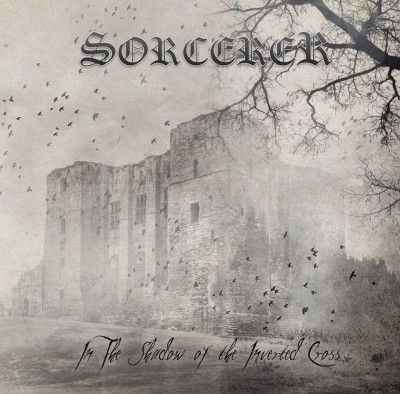 Sub-genre labels are always more fluid than some people would have you believe, but alongside Industrial and Goth (whatever the hell they are), Doom is probably the most easily abused – depending on the context, it can mean anything from “catchy skater-rock with fuzzy guitars and big choruses” to “eleven hours of excruciating feedback and despair”. Revived for the first time since Johnny Hagel left them to join Tiamat in 1992, Sorcerer take Doom all the way back to its roots in Candlemass and Solitude Aeternus – huge, epic, fantasy-themed True Heavy Metal built on monumental riffs and soaring vocals.

Which is not to say that In The Shadow Of The Inverted Cross (Metal Blade) is just empty nostalgia or “retro” posturing. A strong production that combines “modern” clarity with just enough grime to keep it sounding interesting highlights the strengths of what is, at its core, a strong set of catchy, engaging Heavy Metal songs. As you’d expect, the principal ingredient here is The Riff – grandiose, pompous and majestic – but Anders Engberg’s chest-bursting vocals ensure that the choruses will be stuck in your mind for days afterwards. There’s a groove to those riffs, too, but not the rambling beardy swing of “stoner” Doom – this is defiantly Metal, and those grooves stamp and crush without the slightest sense of irony or restraint.

There’s a tendency amongst reviewers (especially those of us raised on the golden age of Nick Terry’s reign at Terrorizer) to feel that we have to apologise for praising an album that isn’t in some way “different” or “special” – that giving high marks to something which is simply an excellent collection of songs within a clearly defined Heavy Metal sub-genre requires a justification – but I’m not going to play that game this time. In The Shadow Of The Inverted Cross is a fantastic Doom-laden Heavy Metal album, and should be recommended unreservedly for anyone with a love for that style.