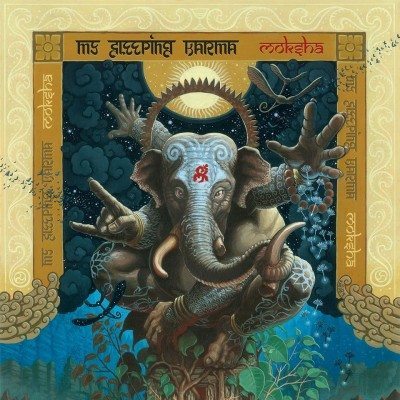 With an album cover gracing a very detailed picture of Ganesh from Hinduism lore, whilst sporting the devil horns, you’d be forgiven for thinking that My Sleeping Karma would have produced an album with a cartoonish nature. That this will take newcomers to the band by huge surprise is just a part of the fantastic aura of mystique that these German’s have shrouded themselves in. With a returning album structure that breaks up songs with interludes throughout and their immersive sonic palette and Moksha (Napalm) is further evidence that MSK occupy a territory of their own.

Where previous album Soma (also Napalm) offered a continued, dreamlike state throughout, Moksha evolves this further; still serene for the most part but with more a more overt metallic edge. The shoegaze elements sitting comfortably with the album’s more doom metal like moments, with psychedelic shades giving deeper detail. The title track is the perfect example of this, as it begins with delicate majesty before building tension and heaviness, without detracting from its tranquility. Further listens highlight the Hinduism influences creeping in, from Eastern instrumentation to mysterious chanting and unusual time signatures.

Previous album Soma received rave reviews from the underground and was a master class effort, yet Moksha is a stunning evolutionary step for the band, adding an extra dimension to their sound, which is very stand out yet flows into their formula exceptionally. With such a rich detail in their sound, combined with the atmosphere they create, not only is Moksha a tremendous effort but one that showcases My Sleeping Karma as one of the undergrounds best kept secrets, with a sound and method unique to themselves.