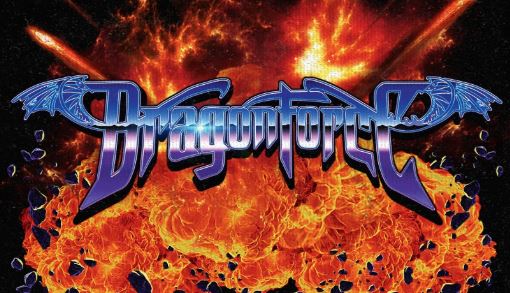 When thinking of the power metal scene in general, you would be forgiven for not necessarily considering Britain an institution of it. Considering that Germany has offered the worldwide scene the likes of Helloween and Blind Guardian, and Finnish groups such as Stratovarius and Sonata Arctica, it is unsurprising that power metal shows in the UK come few and far between, despite the country’s roots in the highly influential NWOBHM genre. 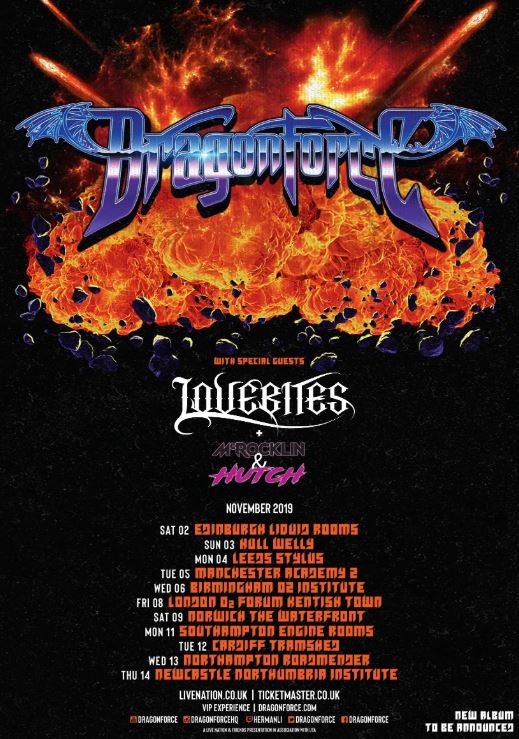 An underground scene with many talented bands aside, there is one major power metal export that the UK has, and that band is Dragonforce. Whether you love them for their consistent releases or hate them for their unabashed optimism and adherence to a specific sound, this band was ultimately responsible for catapulting power metal into the mainstream with their 2006 release Inhuman Rampage (though more specifically, through the track ‘Through the Fire and Flames’) and based on their sold-out show at Manchester Academy 2, still seem to capture the hearts of many a metalhead. On the back of their latest offering, the not so subtly titled Extreme Power Metal, I caught them live for the first time since the Maximum Overload tour, alongside some typical and unexpected support acts. 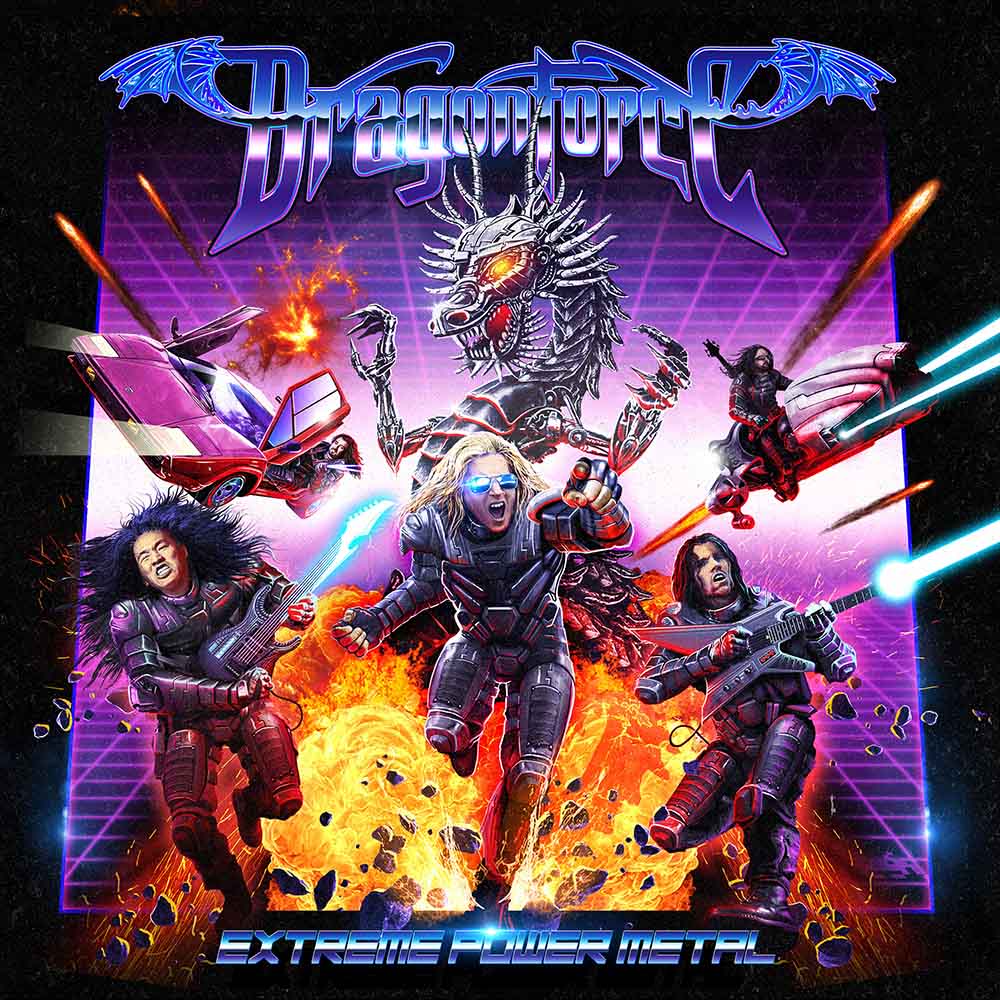 Up first were instrumental synth-rock duo McRocklin and Hutch, a curveball in an otherwise typical set of support acts. Though the Blade Runner-esque aesthetic of their stage show featured bright neon visuals and futuristic soundscapes that aligned perfectly with Dragonforce’s newfound 80’s nostalgic image, the music itself compared to the manic, cocaine pace of the headliner was of a mellow, slow-paced variety. Though sonically much different, the soothing and warm effect of their music was not dissimilar to that of lo-fi music and vaporwave. Thomas McRocklin, who once opened for Ozzy Osbourne in his hometown of Newcastle at the tender age of eight, mesmerized with some excellent guitar playing while his musical partner Hutch hyped the crowd up with some entrancing keyboards. While it wasn’t strictly “metal” of the righteous and hyperactive variety, their “New Retrowave Rock” shredding was a uniquely engaging show that if it were less unique might have threatened to bore me. Luckily, the fun didn’t stop there.

After a brief turnaround, Manchester was greeted by Lovebites, a young, all-female Japanese power metal band that has turned many heads in their short three-year existence for in equal parts their brilliant musicianship and their show-stopping beauty in a genre that largely consists of rugged old men. Having attracted the likes of European festival juggernauts Wacken Open Air and Bloodstock Open Air just last year and then proceeding to absolutely desolate these hallowed grounds of heavy, I predict these five women will wave the flag of old school power metal for many years to come and are destined to only grow in popularity. Their dual mixing of flashy/aggressive and slow melodic guitar play was a nice contrast to the stylings of Dragonforce. While the influence of Helloween and Dragonforce themselves definitely showed in songs like “Hammer of Wrath” and “Rising”, It was wonderful to hear that NWOBHM was also a big inspiration to the fivesome, as it shows how far the reach of the UK metal scene has had on the worldwide scene, coming full circle here in Manchester. As far as their actual performance went, Asami’s vocals were absolutely on point and the band incredibly tight, and despite a short eight-song set commanded cheers from the crowd and my head to bang ferociously.

As the stage went dark and colorful laser lights began dancing around the stage, the sense of anticipation from the crowd felt very high for a band with as many naysayers as they have fans, but as Herman Li and co. quite literally ascended atop a stage complete with arcade machine platforms, any sense of doubt from the crowd dissipated as Marc Hudson demonstrated the true essence of power metal by busting out the righteous opening verse of ‘Highway to Oblivion’, the lead single from their latest release. Demonstrating all the trademarks of a solid Dragonforce track but with added themes of synthwave, the song was a speedy frenzy of solos, passionate vocals, and an amazing chorus to boot. What then followed was a classic of the Dragonforce canon in the form of ‘Fury of the Storm’, which the audience took no issue singing along with.

As video games seem to be the centre of their latest album’s theme, Hudson quickly introduced ‘The Last Dragonborn’ as the next track, a song heavily inspired by the Elder Scrolls series and would not be the final reference to gaming during the set. As someone who isn’t heavily involved in this culture, I never caught on to most of the references, but if you are a fan of either Final Fantasy 7 or Castlevania, you’ll be pleased to learn that the band cover both of their theme songs during the set, as well as none other than Celine Dion. Yes, this is a band that now has ‘My Spirit Will Go On’ and a cover of ‘My Heart Will Go On’ to their name, and unlike their cover of Death’s ‘Evil Dead’ (a clever and unique cover in its own right), it’s actually much better than the great original.

While Dragonforce’s set was largely focused on new material (including the brilliant ballad ‘Remembrance Day’), Dragonforce spared no expense in sprinkling some classics throughout. Most unexpectedly the infrequently performed ‘Black Fire’ from Valley of the Damned, which sparked some ferocious pitting, as well as familiar classics like ‘Cry Thunder’, ‘Valley of the Damned’ and ‘Through the Fire and Flames’.

I have always adored power metal and the neon sci-fi aesthetic, but I also understand that they are both a niche interest and that this review will probably not convince any readers who prefer their metal of the more edgy, extreme variety. But if you want to experience a live show that excels in entertainment value beyond the one Dragonforce song you know, I would highly recommend trying the band out on this tour. As I am not massively familiar with some of their past couple albums, I am also very pleased that they focused newer material this time around, because it is certainly high quality. Although, seeing ‘Heroes of Our Time’ on the set would have been a treat.

If you are already a fan and have your ticket to hand already, I would suggest getting there early just to support Lovebites, as I believe they are the new champions of an often underappreciated genre, and do not sound in any way derivative of figureheads like the German power metal pioneers, or for that matter, Dragonforce themselves.