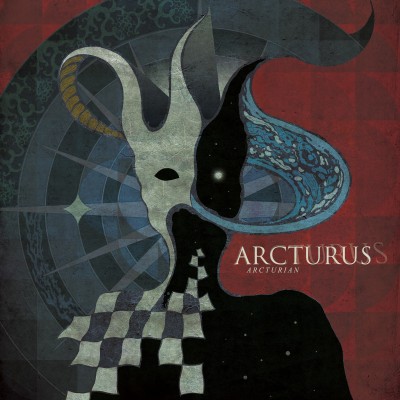 I think that how excited you’re prepared to be about a new Arcturus album depends on what stage you were at in 1997 when they released La Masquerade Infernale (Music For Nations) in a burst of masks, frilly shirts and knowingly ludicrous poses. Though neither their first album nor universally the most popular, it was LMI that made them seem, no matter how briefly, so ferociously IMPORTANT. At a time when the Norwegian Black Metal scene was rapidly torn between fragmenting and shrinking into insular irrelevance, Arcturus were at the very forefront of the bands shining a torch into entirely new vistas.

Bold, dramatic, frequently funny and entirely possessed of itself, the combination of Hellhammer’s thundering drums, Garm’s gleefully pompous vocals and Sverd’s densely intricate instrumentation created something that Black Metal fans had genuinely never heard before. It cast a long shadow over the “avant garde” side of Black Metal (to the extent that they could truly be called that anymore) for years afterwards – even suffering that most 90’s of indulgences, the Remix Album – to the extent that though many fans preferred 2002’s more “progressive” The Sham Mirrors (Ad Astra Enterprises), it seemed to others like a futile attempt to recapture their brief majesty.

An odd choice to spend so long talking about an old album in a review of the new one, perhaps, but in this case the context is essential – because Arcturion (Prophecy) sees the also-ran, half-hearted entity that Arcturus have been over the last two albums shut the door behind them and let LMI Arcturus back into the room. Everything that made that late 90’s classic so… well… CLASSIC is back in full force here, but they’ve also brought some new tricks learned over the last twenty years.

Once again every track has its own theme and spirit – the “carnivalesque” sound that has been part of their image since LMI is still present on tracks like ‘Bane’, but they’re no longer pounding it with repetitive monotony as they did on Sideshow Symphonies (Season Of Mist). Elsewhere ‘Ad Astra’s meditative cosmic vibe returns on ‘Warp’, ‘The Arcturion Sign’ conjures up found memories of ‘Master Of Disguise’ and ‘Angst’ even sees them recapturing some of their Black Metal fury far more successfully than they did on Sham Mirrors.

Which is all rather lovely, but makes it sound as though they’ve simply gone back to a twenty year old album and tried to recapture the formula. Fortunately, that’s not the case at all. Firstly, they’ve broadened their palette noticeably – the driving, contemplative Rock of ‘Game Over’ and ‘Demon’s sleazy electronic Pop aren’t quite like anything they’ve recorded before, yet manage to retain the feel and character of both the band and the album. Secondly, and even more importantly, though is the undeniable feel that this band has grown up. Maturity, such a difficult concept to pin down but easy one to recognise, shines in every second of Arcturion. They’re every bit as arrogant and forceful as they were on LMI, but precocious youth has now been replaced by the confidence of age. In Garm’s absence ICS Vortex (who sang LMI’s standout ‘The Chaos Path’) brings a range and depth that exceeds his predecessor’s bold but often limited operatics.

Arcturion is not likely to blow any modern listeners away in quite the shocking fashion that La Masquerade Infernale managed in 1997 – both the Metal scene and the way we engage with music have changed dramatically since those days – but in terms of musical excellence and thematic power it matches or even exceeds that classic album.

Whether or not you’ve ever engaged with Arcturus before, do so now.