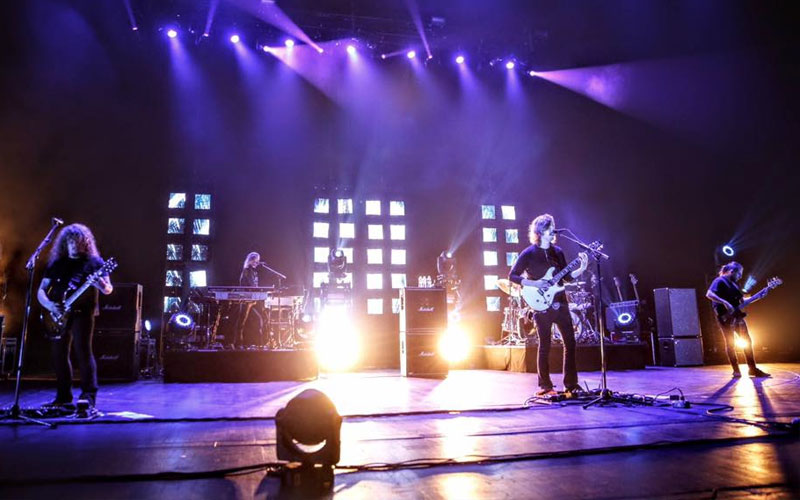 Radio City Music Hall is one of the most historic venues in all of New York City. Located in Rockefeller Center, the 6,000 capacity venue has held concerts for the likes of Frank Sinatra, Tony Bennett, Barry Manilow, Liza Minnelli, Ella Fitzgerald, Ray Charles and BB King, but last night Opeth took to the famous stage, and absolutely mesmerized all those in attendance with over two hours of music.

The Swedish metal icons walked onto the stage just after 9:00PM, and for the next hour and a half, they performed tracks from the entire catalog, including three new tracks. ‘Sorceress’, ‘The Wilde Flowers’ and ‘Will O the Wisp’ sounded even more powerful than they do on the new record, and they were followed by classics like ‘Ghost of Perdition’, ‘Demon of the Fall’, ‘Face of Melinda’, ‘The Drapery Falls’ and more. After the nine song set list was over, fans were already on their feet, but they weren’t done just yet.

The Damnation and Deliverance set consisted of seven tracks from both albums, and had the fans captivated from the first note to the last. They performed ‘Death Whispered a Lullaby’ for the first time since 2003, ‘Closure’ for the first time in four years, plus ‘By the Pain I See in Others’ for the first time ever live on stage. They ended the second set with ‘Deliverance’, and if you’ve ever seen them live, you know why. It’s one of the best songs they’ve ever written, with one of the biggest endings ever, and it concluded their historic performance in New York City perfectly.

After almost two and a half hours of music, Opeth left the stage at Radio City Music Hall to a well deserved standing ovation. The five musicians performed an absolutely flawless set, in one of the greatest venues of all time, and it was an experience I’ll never forget. There is no other band on the planet like Opeth, and last night they proved just how special they are for six thousand lucky fans here in New York City.

What an incredible show from @OfficialOpeth at Radio City! Don't forget to share your moments using #OpethRadioCity. pic.twitter.com/6BjmAvp3Wa