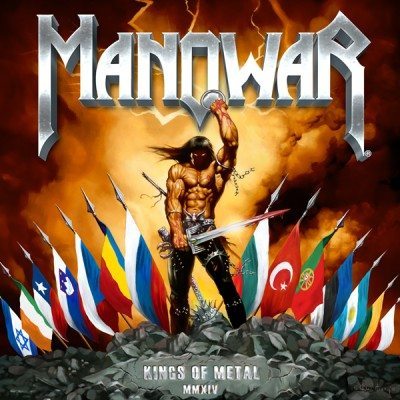 There are no two ways about it, Manowar were responsible for some of the best pure Heavy Metal albums ever released. Take away the posturing and the loincloths (actually, keep the loincloths on… ) and this was a band whose first six albums (and number seven is pretty mighty, too) stand more than the test of time, but take their place at the head of the great hall of Metal Valhalla.

And the original Kings of Metal is the sound of an army of immortals at their peak, raging on ‘Wheels of Fire’, anthemic on the title-track, majestic on ‘Heart of Steel’, epic on ‘Blood of the Kings’, and all of the above on ‘Hail And Kill’. It’s certainly up there with their best, and the best that power/trad/classic (choose your poison of genre-tag) has ever offered. The original Kings of Metal scores a mighty Ten Thor’s Hammers!

Kings of Metal MMXIV (Magic Circle), however, is the Greedo shooting first, of albums.

In every aspect, this comes up the weaker. The tracklisting pointlessly changed; the titles of the songs pointlessly changed; the production is WORSE than the 26 year old version (in every way – the guitar tone is flat and lifeless, the lead tone is annoying, the bass farts, the drums sound like biscuit tins, the volume is severely lacking and the keyboards sound like “My Casio Choir” has parped inexcusably in places); Brian Blessed turns ‘The Warriors Prayer’ into a farce; Karl Logan had yet to show himself worthy of following in Ross The Boss’ footprints and embarrasses himself further still – his re-workings of solos are pitiful; there’s a pointless extra verse listing all of Eastern Europe shoehorned into ‘Blood of the Kings’ AND DOESN’T EVEN FIT! There are about 73 versions of ‘Heart of Steel’ out there, an epic battle-weary emotive track that stirs the heart and spirits, yet here reduced to a lumpen, unevocative and pointless phone-in. Meanwhile, while the 1988 version of the bass solo showcased Joey De Maio’s technical ability, the 2014 take (with the click track inexcusably left in!) just shows how far up his own arse he’s crawled.

The only person to emerge from this fetid disgrace of a re-release with any semblance of credibility is Eric Adams, criminally overlooked and worthy of being feted in the same breath as and seen on a par with Dickinson, Dio and Halford, but even the great Adams has had more triumphant and better days (oh yes, the 1988 version).

Do yourselves every favour, and buy the original of this album. Despite what you think you may think of Manowar it is pure metal gold. This re-recording, on the other hand, is a money-grabbing, tired, in and un credible attempt to paper over the cracks of a creative force that is long since spent. Manowar are now the path-crowders, and should be ejected from their own hall.