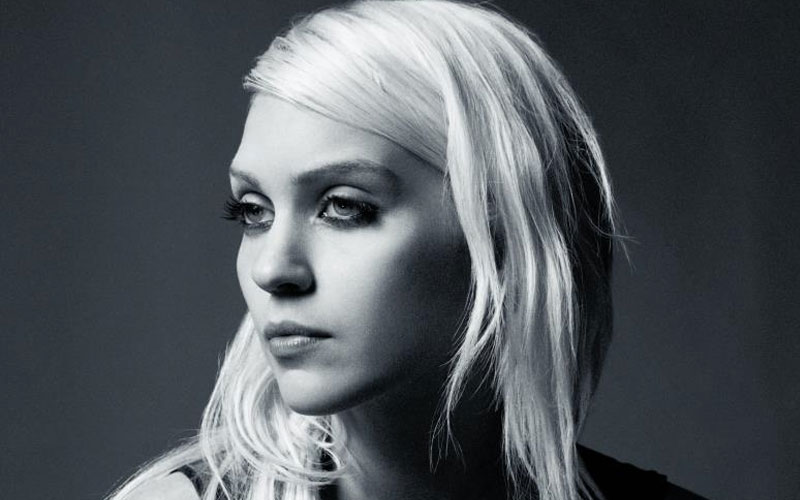 New York Fashion Week is a semi-annual series of events when international fashion collections are shown to buyers, the press and the general public. Coming on September 8th, designer Katie Gallagher will be presenting her seventeenth collection entitled Rain. Unlike any other designer out there, her clothes will be shown to a backing soundtrack that features the likes of The Cure, Burzum, Xasthur, and Hesperius Draco, and this is nothing new. In previous years, she’s presented collections to numerous goth and metal artists songs, and it makes for quite the unique experience. As you’ll read in my interview below, that’s exactly what she wants.

Metal Mark: Let’s begin with some background for those who don’t know you. How did a young girl from DuBois, Pennsylvania become a black metal blasting fashion designer in NYC?

Katie Gallagher: It’s been quite the journey. I don’t know. I’ve always enjoyed creating, so I think it was an evolution. Just like with music, because I was the girl listening to Deftones, while the other were in love with the Backstreet Boys. That initial heaviness opened up the doors of sound to me, which eventually led to my love of black metal. The initial obsession of creating led me to fall in love with fashion, go to Rhode Island School of Design, and eventually move here to New York City. This is where everything happens, so I need to be here ya know. Plus, every tour comes through here, for the most part, so I can get my fill of music as well.

MM: You’re coming up on your seventeenth collection to be shown at New York Fashion Week. Let’s go back to the first one, because you took a risk, and centered it around New York Rhapsody by Haus Arafna.

KG: Yea that was an amazing experience. It was my first ever time presenting at New York Fashion week, so I knew I had to do something special. Their album at the time was New York Rhapsody, which they based off my show, and it seemed like the perfect fit with that collection. It shocked a lot of people (laughs). No other designer, that I know of, has ever really blasted heavy industrial music at their shows. For a first time designer to do it was a risk, but it got people talking, so it was a success in my mind.

MM: You’ve always had eclectic soundtracks to each collection. Whether it’s industrial, black metal, or anything else, it’s very important for you to have that sound.

KG: Of course. Music is a big influence on what I do, so it has to be an important part of the show. In my opinion, you have to present the collections with the sounds they were created in. So for me, I usually listen to black metal when I’m creating, so that’s why my soundtracks involve so much of that style of music. It makes it a more real experience I believe. It brings it all full circle for the customers, and myself.

During my Spring/Summer collection of 2012, I even sang the intro for the show. It was a (Einstürzende) Neubauten track, and something I’d never thought I’d do. I don’t sing for anyone, but if you lock me in a room for a few hours, I’ll sing evidently. Not for you though (laughs).

MM: There are so many genres of music out there. What is it about black metal,
specifically, that you connect so strongly with?

KG: For me, black metal is all about the ambience. It’s almost like you’re listening to nothing, but everything in a weird way. It’s not like Slayer, that’s in your face all the time. Don’t get me wrong, I love Slayer, but black metal just presents a background that no other music can for me. It’s chaotic, but it’s also melodic, and that’s why I love it, and why I listen to it when I’m creating. It pushes me. It soothes me. It brings the best out of me.

MM: Do you have a go to album? A favorite?

KG: No, and I know that’s a weird answer. I don’t like to call out records like that. I don’t know if I’ll ever hear a perfect record, or if it even exists. I like bits and pieces from a lot of records, but not one in its entirety. I connect with different songs on different levels, and I haven’t heard one that has captured that mood or atmosphere from beginning to end. Maybe one day.

MM: It’s obviously working since your show next week will be your seventeenth.
Just like how music portrays a different mood to the listener, your collections seem to have the same effect.

KG: For me, fashion is never the end goal. It’s more about the people that wear it. Their ideals, their inspirations, who they are. How you present yourself is very important. Some people may think that’s fake or superficial, but it’s true. I can usually tell what music people listen to by how they dress. Well, I used to be able to. Now there are metal shirts at H&M, and I don’t know who anyone is anymore (laughs).

MM: That enraged a lot of metal fans. What were your thoughts?

KG: It’s weird. I mean, I take pride in the band shirts I wear. These are the bands that have helped shape me into who I am, so I want to show my support. Just to wear it because it looks cool seems like an easy way out. If you don’t know ‘For Whom the Bell Tolls’, or bell tower as we call it, why the hell are you wearing a Ride The Lightning shirt? It’s odd, but that’s the world we live in.

MM: You mentioned how you perceive people from their clothing, so who wears your clothes? Who is the Katie Gallagher customer?

KG: Honestly, any person. Obviously, it’ll connect more if you enjoy the same music, or see the world as I see it, but it’s really an open collection to anyone. It’s dark, sexy, and moody. Some say scary, but I just laugh that off. This is me. It’s real.

MM: Being your seventeenth show, do you still get nervous?

KG: Totally. Just like how bands say they still get nervous before a gig, I definitely do. I have my ways of calming down before I show, but I’ll keep that secret for another day (laughs). It’s definitely an emotional roller coaster.

MM: After the show’s done, do you just collapse or want to run away?

KG: It’s definitely a somber feeling. I know it’s a weird statement, but it’s almost like losing a part of you. Everything I make comes from my heart, and it means the world to me. I take so much time to create everything, and then it’s just out there, and it’s over. All the time and work is over, and it’s depressing. On the other hand, it’s exciting too, because you see people’s reactions to your craft. Whether they love or hate it, people react, and I think that’s cool. So it’s a weird night for me. I’m still not totally used to it, but it is what it is.

MM: Do you care about reviews? A lot of bands say they don’t, which I don’t believe, but it’s more important in the fashion world I would assume.

KG: Yea, the day after a show that’s all I’m doing. I’m online right away to see people’s reactions. Luckily, I’ve never had a bad review, or at least I’ve never found one. It’s definitely important. You want to know that people are liking what you’re doing, and you’re still relevant. In the end, it is my passion and my love, but in fashion, you need customers too. This is my livelihood. Somehow I’ve managed to create a business doing what I love, and not many people can say that.

MM: Nine fashion weeks, seventeen collections, some would consider that one hell of a career already, but what about you? What is your definition of success?

KG: My true definition of success is press. I’ve been very lucky, and like I said earlier, I’ve never read a bad review. I’ve never had anyone completely trash my collections, and for me, that’s success.

Plus, I get to reach people with my collections. There was one time in New Orleans when I broke down in tears because an eighteen-year-old came up to me telling me how much he loved what I create. That’s everything. There comes a point when you realize that your craft can touch and affect people positively, and that’s hard to put into words. It makes it all worth it.

MM: That must have been surreal for you.

KG: It was. Just like when a song touches you, fashion can do the same. To be the one behind it, and to hear that response can be overwhelming, but it’s beautiful. I’m no musician. I’m a designer. My favorite bands scream out their emotion, and this is how I scream.

For more information, head to KatieGallagher.com.