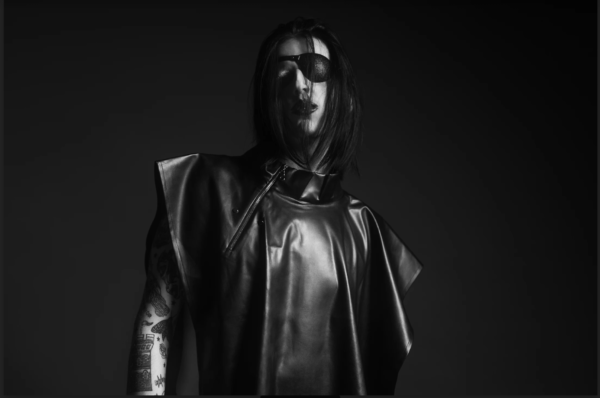 Recently we shared the new music video from visionary artist and musician Alexander Blackstar -“Noir Presage.” Now we have caught up with the artist over email to discuss the video, single, some of his artistic choices, and the musical path he is on for the future!

The “Noir Presage” video is incredible. How did you come up with the concept?

Thank you ! I had the idea last year during the first lockdown. Everything was on hold, including the fashion industry. Certain designer brands began to do their fashion shows virtually without a public ; therefore the XR technology bloomed on the market. I immediately saw an opportunity, so I called my production team to see if there was a way to shoot a music video in one of these studios. The principle is simple, you are instantly merged into virtual landscapes thanks to led screens ; there’s no need to use green backgrounds and to work in post-production. It allows the person filmed to better feel and interact with their environment, which is a very pleasant experience.

Fortunately, the business who owns the studio agreed to work with me and I started to elaborate with them the different sceneries. Then I conceptualized the styling, I needed a perfect aesthetic cohesion between me and this universe virtually created. The visuals are very important to me, as much as the music, so working with this emerging technology was definitely a great occasion to seize in order to push the limits of my creativity further.

The looks of the video seem to combine several mediums. Did the pandemic affect the production schedule, and how long did it take to make the video from the first idea to finished product?

It did not ! Everything went very smoothly, I always reserve two months minimum to the pre-production before shooting the video so I can resolve the issues, if there are ones. I had the first idea last year, then officially launched the production in May and we shot in July. I also edited the music video; it took me maybe a full week after the shooting to complete the project.

Even if I could have delegated the editing, I preferred to do it myself ; I had a particular vision of how I wanted this music video to be ; and only I was in capacities to do this final task.

How did you get started in music?

Before writing songs, I was painting watercolors and writing poems ; I still do actually. Then after school with different friends, I started to write songs for fun. I liked this way of expressing myself so I pursued this vocation by composing my first songs on my own ; which led to the tracks of my first album “Facing Hell”. From there, I began to be very serious about it and saw that it was so much more than just music ; it reunites videography, photography, sound, styling and so many other fields. It just was the right way for me to express my creativity ; so I took the opportunity and decided to do everything that I can to make Alexander Blackstar a successful artist.

For a new fan who has never heard your music before, how would you describe it?

I would say that my music is the logical continuation of what has been done previously in the rock world ; with a modern and more visual approach. It is constantly evolving at each project, as I hate to do something that I’ve already done in the past. If I had to put words on it, it would be “hard-glam-industrial-shock-rock”, but I prefer the term “neo-rock”, because it better reflects my desire of modernizing the genre and to go forward.

Your video uses no green screen and instead was filmed in an extended reality studio, can you expand on this creative direction process and how it supplements the meaning of the song?

I really wanted to make something unreal with this video, adapting the metaphorical images that I had in my mind while writing the song on screen. Therefore, it was impossible to shoot the video in a “classic” way and the solution of using the XR Studio came very naturally. Like on every video that I’m doing for this new album, I have a production team to facilitate the cohesion between the different persons involved in the projects. I just gave my creative directives concerning the elaboration of the three sceneries to my collaborators who transmitted them to the studio. The advantage of shooting with the XR process is that you are in total immersion with your vision, it is so satisfying to see the images that you had in mind come to life and to be instantly merged with them.

Concerning the meaning of the different sceneries, there’s no particular one. They are here to aesthetically reinforce the mood of the song. I rather like to deliver emotions to the spectator by colors, symbols and visual metaphors than to give them a pre-established meaning. Like in the wild, a beautiful landscape can reach your feelings ; yet it won’t have a philosophical sense given, you will find your own based on what you feel by looking at it.

How did you choose the animals that were featured in the video through lyrics, visuals, and jewelry and why do you feel connected to them?

A couple of months before writing this song, I had the idea of using a raven’s croak as a sample in one of my new singles. The idea of visually giving life to it, was therefore logical. This has also been directly inspired by Alfred Hitchcock’s noir movie “The Birds” that I took for reference as well as the movie “Psycho“. Regarding the snake, it has a huge biblical vibe that I wanted to reinvent by giving a futuristic approach to it with the different elements that we find in the styling. These animals are all symbols intended to reinforce the mythical sense of the song and its video.

Knowing you’re a multi-disciplinary artist, can you share why it’s so important to be hands-on through the entire song/video process?

When I’m doing a project, I have a specific vision of what I want. I consider that if I let a point go unnoticed or delegate one of the creative aspects to someone else, I don’t deserve to be called an artist. Also, the final result needs to reflect what and who I am at the moment ; nobody can be better placed than me to read what’s on my mind. It is my vision, my product and I need to face all the consequences (bad or good) of my own creative choices in order to see what needs to be adjusted, so I can evolve towards my own artistic direction all while staying independent. It is the work of a life, but artistically it deserves the wait. If you don’t make the choices yourself and let other people define you, there’s no true purpose of taking this path.

You credit artists such Alice Cooper and Marilyn Manson as sources of inspiration, whose work helped influence your vision when writing and creating “Noir Presage” and how can we see it in the song/video?

Alice and Manson are definitely artists that powered my ambition at the beginning. I’ve learnt so much from them by watching their live performances, knowing their stories, how they evolved in the music industry etc … They will be forever in the heart of what I do, but I’m entering now in a new phase where I need to evolve into my own thing. Their influence gave me solid bases to lay the foundations of what my artist’s career will be, now it is time to build the rest.

My new album, and this single are paying homage to them by exposing the common characteristics that I have with both, a very metaphorical and literal approach of the lyrics, a dark classy aesthetic and an independent way of managing our art. I’m not giving up these points, I just want to use them differently in future projects to make rock music evolve with its time.

What do you hope to accomplish that will fulfill the “Shakespearan fate” of slaying your harshest critics?

It has already been accomplished, with the release of this song. This is a direct, fatal response to them. My ambition and determination are not negotiable, I’m going to pursue my evolution across the music world no matter what anybody has to say about it. The critics are vain, doomed to know a certain death while this song will remain.