Reclusive grindcore masters Agoraphobic Nosebleed have been downright prolific the last few years. Playing multiple special shows at festivals, and with a great new EP out earlier this year Arc (Relapse) ,the band has seen a resurgence of popularity, and as usual, unwavering respect in the underground. They will take a turn as one of the headliners this weekend at Southwest Terrorfest V in Tuscon, AZ. Ghost Cult’s Andrew Francis caught up with Adam Freisch, Richard Johnson, and Scott Hull earlier in the year to discuss the current state of the band, future recordings, and the difference in the record industry between being in a grindcore band, versus say Slayer, Iron Maiden or Tool. 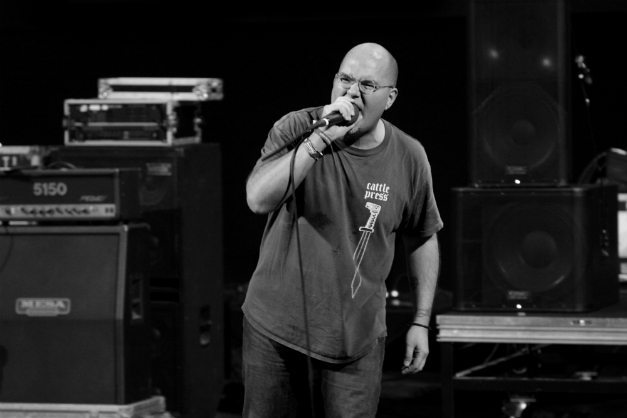 As you guys have only played only three or four shows ever (as of this interview) as ANB, one after Pig Destroyer at New England Metal and Hardcore Festival 2003 then twelve Years later at Maryland Death Fest was your first official show. Do you guys have a reason behind doing so few shows?

Rich: We rehearse individually, but we got together a few times before we play a show and play as an actual band. We did that the most before MDF since that was the very first show. Especially Scott, he had to get a lot of shit together for that.

Scott: Yeah the process for getting the drums together for live performance basically re-rewriting the entire drum track in a different program, so I could put it in to pro tools to be fed through front of house through an interface so the sound guy can mix it, as if it was a real drum kit mixing each drum individually, as opposed to two tracks of drums like a normal drum machine would be. So that’s one of the big reasons why we hadn’t done it before, because the technology didn’t exist. At least not without having a huge rig to accompany it to be able to mix every drum on their own.

Right, I figured up until now every one would have been real critical of the drums even knowing that it is a drum machine.

Scott: Yeah it still is a drum machine, but it sounds much better. 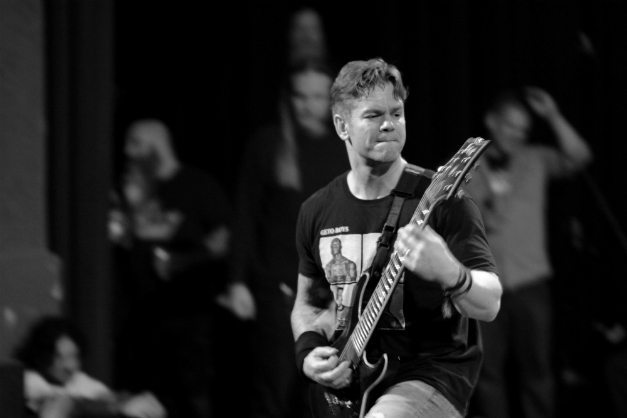 From what I heard the kicks were really spot on, but still sounding like a drum machine at certain parts, but as id watch the performance you would think there’s a real drum kit there instead of the open void you have in its place. If there was a drummer there that’s what it would sound like , a drummer with triggers?

Scott: Right the line is blurred there with a lot of drummers their just as triggered as a drum machine would be so.

Was there any kind of change in the sets or even stage presentation for the few shows you have done?

Rich: At MDF, we didn’t have the projection in the background so that was pretty much it.

Scott: We worried about it at MDF cause we couldn’t get a projector situated so we had to do away with it completely.

I had a brief conversation with Kat (Kat Katz, one of three singers in ANB) yesterday before you guys went onstage because I knew she wasn’t going to be here, but do to schedules other projects and lives outside the bands do you feel doing festival dates is much easier than doing a full tour? or is it cause that’s all ANB can facilitate cause of your jobs? Scott I know you have a job in IT, Kat goes to school ..

Rich: Hey my job is important too man!

What is it you do Rich? I know John is tour manager for Cattle Decapitation, we know the least about you.

Rich: Joking aside , like most people we have to put in for our vacation or get away from school to go and do these shows and we wanna do something more with that next Yeah with more club shows and touring.

So Rich is a cube farmer, Scott is in IT. John do you do anything else?

John: I don’t work a regular job, but i have done some acting

Scott: He was in house of cards!

John: Yeah I did that but I have a more open schedule and am more open to do shows and tour. 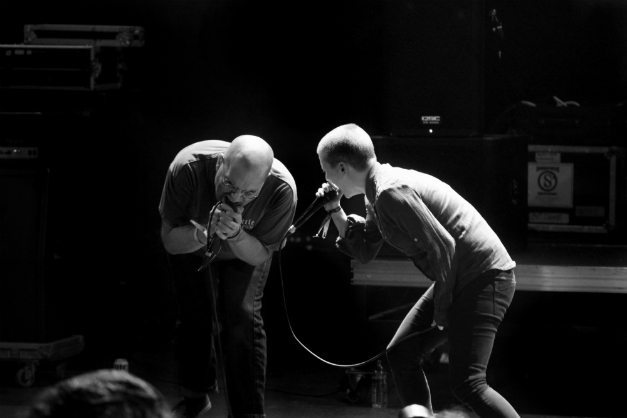 Beyond getting booked for Netherlands Deathfest, Hellfest in France, and Southwest Terror Festival 2016, I’m sure you guys got asked way in advance to get all the schedules aligned and time off. Are are you all comfortable for the time being with festivals cause they fit your lives?

Not so much the stage sizes, more are festivals easier to play and prepare for?

Scott: Yeah it’s a bigger production than pulling up and playing, there’s a lot of logistics to work out before we go out and play. It’s not just a drum back line requirement. There’s the onstage PA and front of house, every things different in some was. Adam: and I work with promoters so they know this is whats required or it’s not going to go well.

Otherwise people will see the show and leave feeling totally let down.

Scott: Yeah we have to stick to that other wise whats the point of even doing it cause you’d be let down.

Rich: It’s not so much a requirement it has to be there if you want us to play, the most important is the PA for the drums and everything to work live. 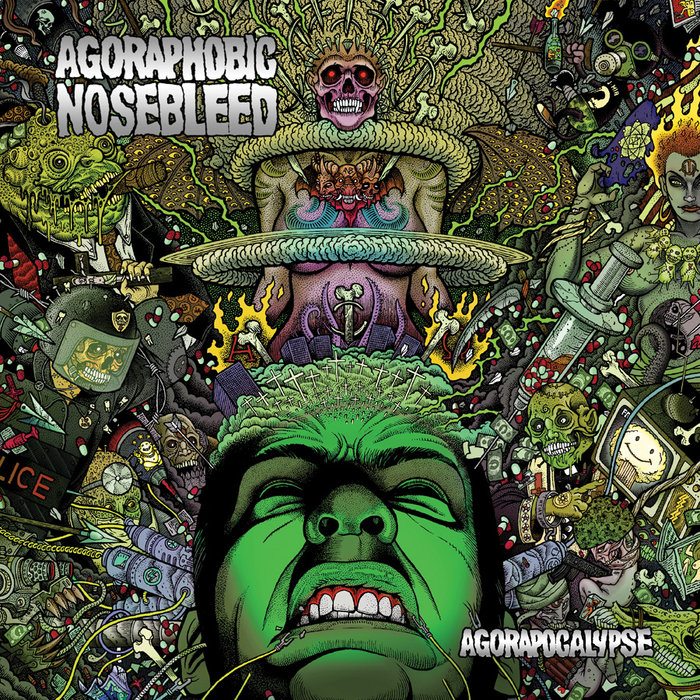 Adam: And they aren’t going to have any standard gear that any other band would use.

Scott: It’s a different workflow, completely different that the crew would have to get around and then the drums off the stage and back on after wards if there was another act on after us or what ever.

Scott: You have to find the balance , if you do the music full-time for your livelihood you’re gonna start to resent it. cause then you have to do it, when music should come from a place of inspiration and creativity and if you have to maintain a schedule you could write something awful and sacrifice your creativity

Rich: JR (Jay Randall) put it best one time that you have to write a record whether you’re inspired or not. They gotta put another record out and tour it…

Scott: And trying to write music when you’re not inspired is an absolute job. It’s horrible. And rushing them is unacceptable. Long after the bands gone the records will be here.

Rich: Unless your band is so successful that you don’t need to do whats called a cycle ,when you hear about Slayer or Iron Maiden who can go a year or two without doing anything can come back and the fans are still there wanting whatever they put out. They’re not gonna be forgotten about.

John: You know that bands like the stones and Tool do they need new albums? They can just tour and still sell out arenas on the old material and still be successful.

Scott: Yeah but Tool fans wanted a new Tool record even when 10,000 Days was still new. Look at it this way there was an interview I read with Carcass and they had been working on Heartwork at the time and had been living off of T-shirts basically, they got by. and at the time were fucking huge, but were still just getting by.

Do you guys think that applies to you guys or do you think its different because of the length in time between records?

Rich: Well it’s like we were saying the pressure isn’t really there cause we all have jobs or school like in Kat’s case

Scott: And Relapse has been really good about understanding that they’ll get records from us when they get them they have other bands they can deal with and put resources in to and do press for.

So in that case do they treat Pig Destroyer the same as ANB with a more loose time frame?

Rich: But they want videos from them if anything? Right?

Scott: Well until this point Yeah cause now we are going to be playing shows so that may change.

John: I don’t think Relapse had put and kind of deadlines on any bands do they?

Scott: They had, but never for us.

were also pretty cheap comparatively to other bands.

Scott: Well yeah cause you do most of the recording which brings the cost down.

So lets put it this way, we have the Scott bands…

And then we have any other Relapse bands…

Rich: I love being in “the Scott bands”

The world of Scott Hull hahah!

So you guys are working towards 4 records for each member of the band very much like KISS?

Rich: Yeah I’m such a KISS freak, but i don’t know if it’s quite the same.

Scott: Kat’s album ARC is doom and some of the material has been around since 2007, and we have a Black Flag for Jay. I don’t think I need one or John needs one. I mean it would be cool, but we really need to get a new full length out that’s our big goal. The follow-up to Agorocalypse. and then the other two EPs would follow-up shortly after that.

I noticed there’s a lot of singles splits and 7 inches, was this intentional and something you want to continue?

Scott: Not as much as we love doing them and the bands but any music we put our time into will be for a full length release and nothing else. Agorocalypse was in 2009/2010 and then soon it will have been ten years and then an anniversary tour and falling further behind.