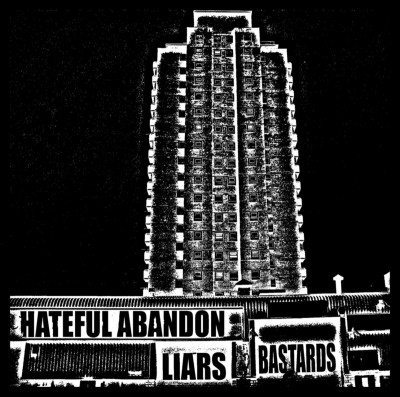 Want some happy music? You know the sort that makes you want to stand up, shout and throw your cares away? The sort that makes sense with beer in hand and shouting along to every chorus…? Then steer well clear of Hateful Abandon as happiness is not a vibe you are going to get from their dystopian vision of a civilisation rotten to the core, its maggot-ridden corpse exposed through musical and lyrical expression. The two-piece from Bristol have carved out something of a cult following with music verging on Killing Joke and Burzum downing fistfuls of barbituates and their latest release Liars/Bastards (Candlelight) is packed with cadaver-ridden angst at the state of 21st Century humanity, all kicking off with the agonised shouts and military drumming of ‘Maze of Bastards’. Its downbeat electronics echoes the sludge of some bands but reaches further through tone and arrangement.

It’s not easy to pick a highlight form Liars/Bastards as it is such an agonised expression of where we have reached in our species evolution. The deceptively upbeat opening of ‘Culprit’ serves to lull the listener into another tale of terror and elsewhere ‘The Test’ opens with a quotation from 1984 that serves to introduce a swirl of keyboards and precision drumming.

Despite their bleak outlook on the world Hateful Abandon declare that they are “not a political band” saying that “we are not preaching to anybody, we merely hold a mirror up to the world. We deal in truth not trickery.” But on ‘There Will Never Be Peace’ there is both their declared penchant for reflecting the world, but it is close to a political statement; a musical single finger thrust at those who would send sons of mothers off to die.

A fair summary of the band, and this album, is on the 10-minute plus closer ‘December’. This where they express themselves, producing an almost epic take on industrial metal and electronica in its purest form with Swine’s drum lines providing a subtle underscore that ensures the keys and vocals don’t disappear up their own ass, something that they stray close to on other tracks.

Vice Martyr and Swine may not want to be anyone’s rock heroes, but there is a distinct feeling that to progress they are going to have to stretch their sound a little further. That this release clocks in at less than 45 minutes suggests that either they have much more to come, or their material takes an inordinate amount of time to emerge.

Either way – this is an “enjoyable” experience in the sense that its’ very bleakness is a cathartic listen; confirming what we know about the world, and with the hope that this form of art can really inspire action in some future time. A good album, if not a great one, it is nevertheless intriguing.