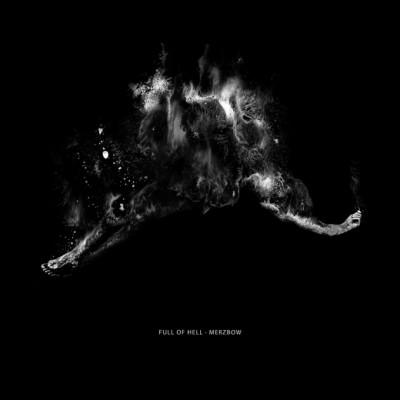 If anyone reading this is still in their first few years of listening to Extreme Metal, allow me to give you a piece of advice, as unpatronisingly as I can manage – don’t believe all that nonsense it not being ruled by fashion. Next to actual mainstream music Extreme Metal may seem joyous and unrestrained, but once you’ve been around the block a few times you realise that it’s as bound up in the tidal flow of trend and counter-trend as everything else. I mention this because blending your Metal/Hardcore with Noise, it would seem, is IN.

Earlier this year I reviewed the latest album from AEvangelist and talked about how they played their Noise and Death Metal elements simultaneously – this collaboration between Full Of Hell and Japanese Noise Royalty Masami Akita takes a similar approach for most of its eleven tracks, Merzbow’s caustic, dissonant Noise coexisting with FOH’s dirty, rumbling Grindcore. The Noise is much lower in the mix than with AEvangelist, though, adding depth and texture to the Grind rather than competing with. It works well, though doesn’t really explore any territory not already mapped out by Pig Destroyer or Narcosis, and it seems almost disrespectful to hear an artist of Akita’s influence essentially joining someone else’s band as a “Noise guy”.

The balance does shift, however – some tracks are dominated by Merzbow’s sinister, chittering Noise supported by distant feedback and distorted Grind screams, while others (album stand-out High Fells the most notable example) put both elements on a more even footing to deliver something more distinctive and representative of both artists. It’s in these moments when the true value of a collaboration – something new forged from the qualities and strengths of both parties – becomes clear, and it’s a shame that it’s a relatively small part of the album.

I feel as though I’ve been fairly negative here, so I’d like to take a step back – Full Of Hell & Merzbow (Profound Lore) is a savagely efficient, well-structured album that achieves exactly what it sets out to do and doesn’t waste a second of its running time, and is not going to disappoint anyone who finds the idea of Grind and Noise cohabiting an interesting one. Criticising for what it isn’t is perhaps unfair, but with a name like Merzbow on the cover, it’s perhaps not too unreasonable to have hoped that more risks would be taken.