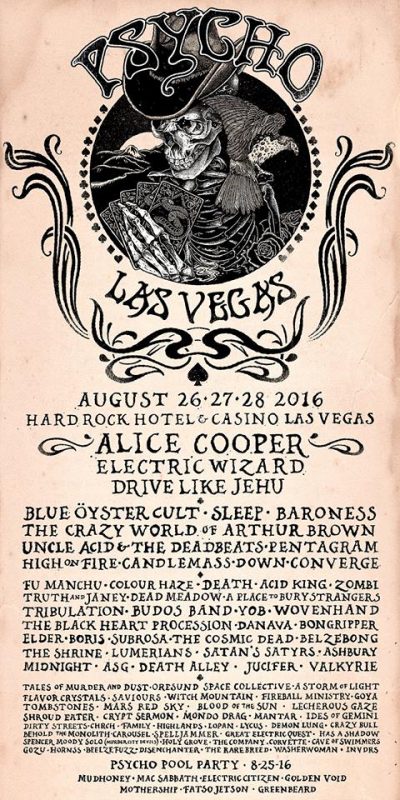 For the second year in a row, the US stakes their claim to holding a fest the equivalent of a Desertfest or Roadburn level of excellence in the form of Psycho Las Vegas. Last years’ inaugural Psycho California was a hit by all accounts, and therefore not a surprise that Vegas was the locale of choice for round two. Definitely the town is a bigger draw for the bands themselves and some party minded fans, although a few days is really all your should ever spend there at once.

Mudhoney at the Paradise Pool, by Hillarie Jason

Mainly occupying The Hard Rock Hotel and surround four stages, the four days and countless bands offered something for everyone. The Joint, The super cool Paradise Pool, Vinyl, and occasional events at the Black Light Lounge inside of Vanity club made for a different vibe and experience to see bands in, beyond the normal band in a club or an outdoor pop up stage like other fests. If the show, band hangs, and merch options weren’t enough for you, you could easily get diverted by what Vegas offers in terms of sensory over load.

Mudhoney at the Paradise Pool, by Hillarie Jason

Thursday was closed out by Mudhoney, always terrific live and holding down the elder statesmen of rock very well these days. But the opening salvo for Psycho Las Vegas wasn’t short on other talented bands, such as Fatso Jetson, Electric Citizen, Mothership, the weirdos in Mac Sababth and indie faves Acid Witch. If you didn’t blow your load musically or partying the first day, you were in good shape for Friday.

Friday was one of the best days of the festival in terms of talent with a murderer’s row of greats like YOB, Wovenhand, Converge, Down, Pentagram, and more. There were many other little gems of artists worth taking in aside from other notables like Tribulation, the fuzzters in The Shrine, Zombi, and Detroit proto punks Death. The stage at Vinyl featured acts like Gozu, Holy Grove, The Company Corvette, Beelzefuzz and Crypt Sermon. Metal loving comedian Brian Posehn and The Crazy World of Arthur Brown ended action on Friday. Check out this photo set from Hillarie Jason covering for Ghost Cult:

Down, by Hillarie Jason

The Crazy World Of Arthur Brown, by Hillarie Jason