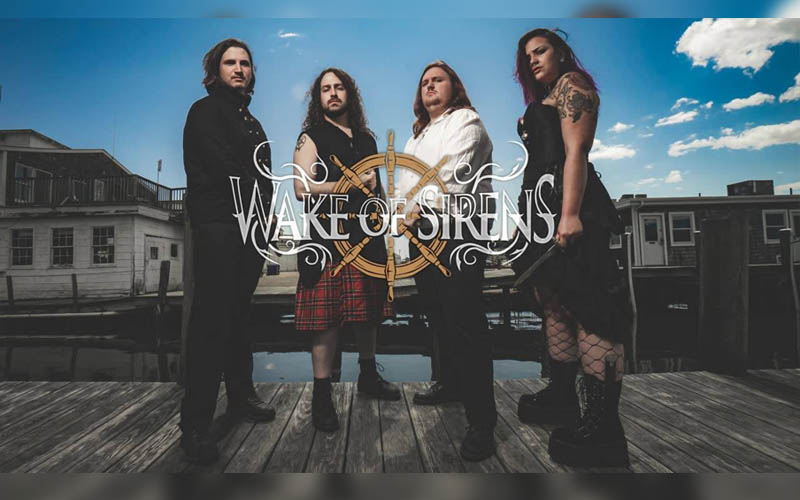 Ghost Cult is proud to share the debut lyric video from Boston’s seafaring-themed metal band Wake of Sirens! The band describes their sound as inspired by not only tales of the open ocean and admiralty, but also by the shanties and music sung upon the waves. The bands’ vibe is a hearty blend of threads from Powermetal, melodic Thrash, and Death Metal genres, but also sounds like the bastard child of a proggy feeling Amon Amarth and Alestorm for some extreme nautical heaviness! Their debut album The Blackest Deep releases on April 3rd 2020 and will be avaialble via all streaming platforms. The band includes members of bands such as Boston scene music veterans such as Vivisepulture, Ice Giant, Dzo-Nga, and ex-Age of Embers. So get on board and watch the lyric video for ‘Owned By the Ocean’ right now!

‘It is with great excitement and rattling of sabres that Wake of Sirens finally unleashes its first single, “Owned by the Ocean”! This is a project that’s been in the works for what feels like ages, and to see it finally take shape like this has been exhilarating. The Blackest Deep is an album I wrote and recorded in 2015 with the help of several great musicians, most notably Aaron Maloney (Waverunner, It’s All Good) and Dan Wise (Sekengard, Dogs & Day Drinkers). It has since lain dormant until the opportune moment – and the opportune crew.

The time has finally come for the album to surface, as Wake of Sirens becomes a proper band and embarks on its maiden voyage over the next three months. Singer Daniel Wilson, guitarist Nick Gallop, bassist Kristina Paul, and drummer Vishnu Reddy will bring this musical adventure to life half a decade after I first began creating musical motifs to illustrate Ernest Shackleton’s legendary voyage across Antarctica, and we hope that you find as much excitement in it as we have.

“Owned by the Ocean” will be the first glimpse into this metallic maritime vision, brimming with perilous tales and imagery of haunted dark waters. This version, as well as the debut album which will follow in April, is the original album I created in 2015 while I still called my project Taravana. The following tour will finally breathe life into it thanks to a new group of fantastic performers, and hopefully establish a lasting comraderie as Wake of Sirens fulfills its long-awaited destiny. Welcome to The Blackest Deep!

Come, play in the waves

Never mind the crags and caves

See these beauties upon the tide

And all the sailors who have died’

The album’s concept is based loosely on the doomed 1914 Imperial Trans-Antarctic expedition, conceived by Sir Ernest Shackleton’s an attempt to make the first land crossing of the Antarctic continent. “Owned by the Ocean”, the album’s first and only single, captures the heart of what it means to be stranded out at sea…

3) Until You Slip Away

5) Owned by the Ocean

Raphael Weinroth-Browne – Cello, “Until You Slip Away”

Wake of Sirens is: