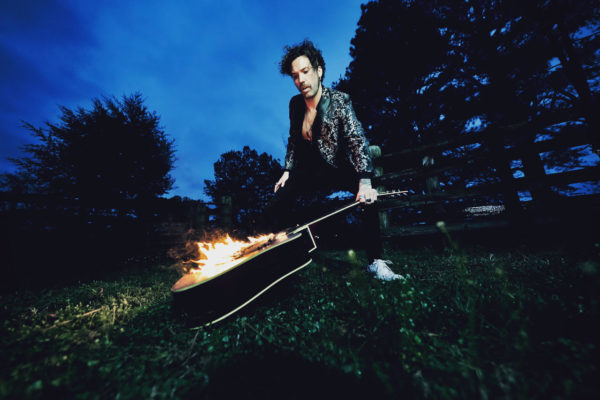 Some people just have a gift for taking the rough patches of life and making it sound peachy. Psychedelic rocker Krantz paints the stories of his life in songs that feel a little sad, but also show a shimmering pop genius for ear-catching melodies. Take his latest single “Louisiana” for example with its indelible chorus, set against a world-weary vibe. Ghost Cult is proud to bring you the new video for the track right now!

“I’m really pumped how the directors really gave the video a Louisiana vibe and the end gives me goosebumps every time!”

Streaming/download link for the single: https://distrokid.com/hyperfollow/krantz/louisiana

After leaving his home state of Iowa, traveling the world, touring over 200 days per year with a band called The Effects and opening for bands such as the Kings of Leon, Shinedown, Foreigner, and the Toadies, Jeffrey Danger made the decision to “live the dream” and eventually landed in Nashville. He hit the studio between tapings of MTV’s music competition, American Supergroup, where he eventually became a finalist in the competition.

Following the release of his self-produced solo album, Krantz joined forces with Erik Theiling (bass), Tee Tallent (keys), and Adrian Flores (percussion), who he met on the Broadway circuit. Together they bring a psychedelic/pop/rock edge equipped with an in-your-face attitude, intertwining provocative lyrics and authentic, no-holds rock and roll. Krantz embraces frantic ecstasy and introspective depths, alternating between crazy antics, a dash of face paint, and a meaningful look within. The new record takes on several personalities, drawing influences from pop to reggae to artists including The Beatles, Weezer, and T Rex, among other golden age rock acts.