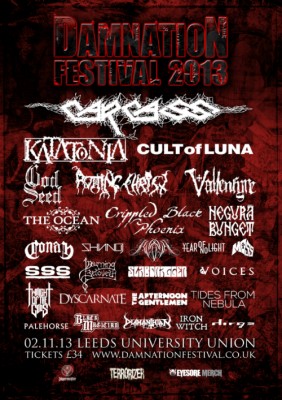 There is a subtle irony in catching the train directly opposite the site where this humbly began, nine years ago. My, young titan, how you’ve grown…the news of Mourning Beloveth‘s withdrawal was a bitter blow, but with Damnation’s biggest bill sprawling ahead of us, there was plenty still to offer.

I licked my lips in anticipation for French post-prog openers Dirge, who opened us up with a downtuned rumble from hell. Front man Marc T., a slimmed-down Kurt Windstein, bellowed and hulked like a disturbed bear, the constant rumble of the bass frequently pierced by wailing leads. The whole set, whilst not completely captivating visually, was a lumbering beast of tolling agony. Competing with Dirge, Liverpool’s Diamanthian were a hoarier, more fevered animal, the scratching riffs and blastbeats mixing with the scouring depth of bare-chested Hetfield-esque frontman Scott Linton. It was hardly a groundbreaking set but the blend of death brutality with the occasional doom riff and a little friendly banter was politely received.

The only band of the day with no competition, hostile crust-sludgers Iron Witch, had already gathered a sizeable following by the time those witnessing the first sets arrived. It was nice to see that their early nervousness has been replaced by a confident swagger accompanying the heavy, grinding riffs and snarling scream. One of the hardest working bands in the UK right now, this NOLA-influenced mob are growing all the time, the penultimate Hangover Suicide introducing a whirling groove and no little invention. Local boys The Afternoon Gentlemen subsequently woke the nodding crowd with their brand of frenetic grindcore but despite the angry, frenetic sound, there was a certain indiscernibility about it, coupled with a workmanlike performance. Polish shoe gazers Tides From Nebula proved an amazingly effective and affecting live proposition, an agonised beauty which lifted the bewitched throng and carried us on a wave of euphoria, whilst the pounding rhythms whipped the sea into a maelstrom of emotion. Six-string bassist Przemek Weglowski took centre stage, raising and flinging his instrument like the cheating lover he appeared keen on throttling, whilst the foppish lead guitarist wrought plaintive agonies and ended the set amongst the crowd. This mind-blowing performance set the scene for the Alan Averill / Nick Barker supergroup Twilight of the Gods to open the main Jägermeister stage. They hit it running, a menacing Nemtheanga hooded and baiting a crowd reaction, and on presence alone this was a winning performance, the experience of the individual members shining through. Averill proved almost surprisingly adept, with Halford-style screams complementing those Dio roars, and a rollicking rhythm section galloped out maiden basslines and rolls for fun. The ‘Manowar-dial’ nickname also is most definitely not out of place; the riff to Children of Cain bruising the soul, and drama and humorous banter was abundant. Judging by the multitudinous goat-horn gestures, most loved it.

In contrast the set from former Akercocke members Peter Benjamin and David Gray, the progressive black metal of Voices, was a somewhat more debatable affair not aided by a strangely muffled sound quality. Benjamin played the set in a rather diverting black mask; indeed, the sound was dramatic but the cascading and complex rhythms governed all other aspects. Slashing, warped but largely unfathomable. Far less troubled by sound issues were the mesmerising French sextet Year of No Light: an oft-lonesome keyboard taking centre stage and hammered by enormous basslines, the rumbling thunder augmented by two bare chested drummers, often holding court with their metronomic, symmetrical actions, save when one emerges to caress the keys occasionally. Despite the colossal rhythm a lush yet spiked melody sprinkled over the massed hordes and the whole proved an enthralling if torturously slow set: a post-drone extravaganza which impressed far more than this year’s abysmal Vampyr Soundtrack. The Gauls overran somewhat, which meant the next two bands were well into their respective performances by the time we reached them. London trio Slabdragger are pure molten lead, but today had added reverb which, bizarrely, gave extra clarity. The bunker was teeming with adoration, meaning they were out of sight visually as well as sonically, yet whilst Yusuf Tary’s bass kicked holes through the gut, the normally thundering drums were less sonorous than usual. One One One is one of the year’s best releases and one which has given Norway’s Shining a wave of momentum building on the success their stunning ”Black Jazz” opus gained them. Jørgen Munkeby is incredible. Whither he is peeling off shredding saxophone parts or demonic guitar riffs this enfant terrible is a true star! ”My Dying Drive” and “The Needle And The Damage Done” are as warped and experimental yet there are some herculean pop hooks that hold these spellbinding compositions together. They hypnotise the main stage with their nightmarish John Zorn-isms blending with NIN’s hooks. An incendiary performance.

Well-respected Horsham death-heads Dyscarnate packed out their slot, purveying a piledriving death sound with equal physical muscle, and a much kinder mix than Voices received on the same stage. Savage vocal performances from the string attack of Henry Bates and Tom Whitty scythed through the ubiquitous smoke machines, whilst technical structures varied the brutal, staccato assault. They received a very positive response which was well deserved. US post-metal quartet Rosetta were equally lauded, their mournful yet harsh tones augmented by the agonised scream of Michael Armine and no end of spiked, evocative melodies. A fervent crowd worshipped what was the most active and mobile band so far, bassist David Grossman dropping to one knee in delivering the rumble whilst the drifting leads leave tears in the heart. Meanwhile, more Liverpudlians in the huge frames of SSS produced an almost as sizeable sound. Also pulling a healthy throng, they proved a tight hardcore unit, although the hostile rasp and stilted banter of vocalist Foxy left a little to be desired. It was all Araya meets Black Flag, a little uninspiring but fiery all the same. Ugly, virulent thuggery is Palehorse’s stock in trade. An expression of barely repressed violence, the knife at the throat experience of dual bass doom-core is hideously savage. Monolithic slabs of noise over which Seedi screeches and yelps alarmingly provides a deeply unsettling experience. Indeed the moshpit has to be broken up by security when a couple of overzealous punters come to blows.

The drama, the eerie black folk, the wooden frame…it had to be Negura Bunget. With only drummer Negru remaining from their classic line-up, it seemed everybody wanted to see if their unique brand of rustic horror had suffered as a result. The answer was a resounding ‘No’. New mainman Vartan Garabedian eased between resonant depth and harsh growls, and those panpipes and bamboo horns duelled deliciously with sweeping riffs & cavernous double kicks. It’s a harsher sound than before, yet the emotion and sheer ability onstage held the packed room in thrall. Meanwhile, moving pictures accompanied the prog-post swell of The Ocean. There’s a harder edge to their live sound than many here expected, sometimes eclipsing the usual technical aspects of their music, but the crunching riffs and pounding drums don’t drown the wistful melodies. The German collective’s presence was often silhouetted by a strategic light show which added to the theatre, culminating in a dual leap from chilling heights by both Loïc Rossetti and Jona Nido to leave an enthralled crowd stunned and tingling. A similar effect was given by Londoners Serpent Venom, last-minute replacements for Mourning Beloveth, and all occult doom; vocalist Gaz Ricketts’ St Vitus t-shirt saying all we needed to know. The crunching Sabbath influence was undeniable yet the band still maintained a sense of identity, Ricketts’ semi-operatic roar and the weight of the notes on the cavernous Four Walls of Solitude so sonorous as to induce stirrings in places not easily reached.

Opening with ‘Sign Of An Open Eye’ Godseed are initially hampered by a poor sound mix yet the raw brilliance of front man Gaahl shows that he and King Ov Hell have been the driving force behind Gorgoroth despite Infernus’ protests to the contrary. Even shorn of the trapping of naked crucified bodies adorning the stage, the band’s sonic abuse is harrowing enough. ‘Wound Upon Wound’ is as harsh and vicious as black metal gets.

At the other end of the spectrum came the borderline rock of Crippled Black Phoenix. That this UK collective could have been spawned from the mordant sludge of Iron Monkey is almost inconceivable: Zeppelin-style riffs blended with heavy, somnolent rhythms and bluesy leads on a stage that was almost as packed out as the room. Whether it was a desire for a change of pace that brought the crowd in or a display of real diversity in the metal public, CBP initially went down a storm. The occasional mid-rock pace, however, saw more and more room grow in the crowd.