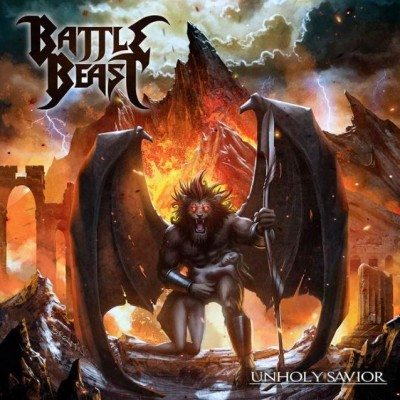 Ever since Hammerfall brought Glory To The Brave (via Nuclear Blast) by damn near single-handedly re-establishing traditional metal as a valid concern some 18 years ago, the traditional types of metal have existed in a vacuum. While even the most conservative of genres, thrash, updated itself in several directions via the urbanization and gangsterization of a Machine Head, or branched out into progressive and technical fields of your Voivod’s and Heathen’s, traditional metal (a sub-genre incorporating “HM”, Speed and Power Metal) seems happy to regurgitate the same tropes and styles ad infinitum.

I guess the clue is in the tag “traditional”…

Finland’s Battle Beast on their third album Unholy Saviour (Nuclear Blast) tick many boxes of the Speed Power Metal sub-genre confidently, continuing exactly where their second, self-titled album, finished; post-Stratovarius hard-rocking refrains punctuated with pacy Accept-influenced riffing, and peppered with rapid bursts of Pyry Vikki’s double-bass drum hurtle. Added to those ingredients are Noora Louhimo’s vocals, not a million miles away from Sister Sin’s Liv Jagrell (a band that Battle Beast share several aural similarities with) pitching from punchy mid-range to a powerful throaty higher register that give the band their quasi-distinctiveness and a USP.

As the album unfolds, it’s clear Battle Beast have three song types, the Symphonic Hard Rocker, such as opener ‘Lion Heart’, the ‘Freewheel Burning’ Speed Metal anthem of a ‘Speed And Danger’ and the softer, more delicate power ballad, of which ‘Sea of Dreams’ displays subtlety and grace and a softer tone to Noora’s voice, in a track that, while obvious in its dynamic climb, works despite its’ genericises.

With sprinkles of keyboards and dual guitars driving duelling descants, make no mistake the term derivate isn’t always a negative thing as Battle Beast do exactly what they set out to do, and this is a collection of well-crafted Hard Rocking Power Metal songs. The fact that there is nothing novel or innovative doesn’t have to put you off, it’s just a matter of whether you have room in your collection for an album that does exactly what you expect it to, that will share characteristics with several of its bed-fellows and is, ultimately, the very definition of “if you liked this band before, you’ll like this, if you didn’t there’s nothing on here that’ll change your mind”.