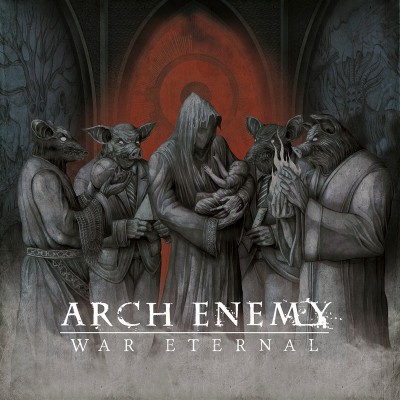 Ninth album, eighteenth year of existence, and on to Arch Enemy Mk III. For those who don’t know, not only has vocalist and focal point Angela Gossow moved “upstairs” (to a management role, not, um, the spiritual upstairs) and been replaced by The Agonist’s Alissa White-Gluz, but Christopher Amott, younger brother and long-standing guitaring foil of mainman Michael Amott has also flown the nest, replaced by Arsis axeman Nick Cordle.

So, War Eternal (Century Media) finds itself subject to intense focus, with the pressure on the band ramped up. Get it wrong, particularly on the back of the disappointing Khaos Legions last time around, and Arch Enemy fall onto the pile of also-rans, with a legacy that would say released two great albums early on (Black Earth and Burning Bridges), before a period of commercial success then gradual decline into obscurity.

No one need worry. War Eternal is Arch Enemy’s best album. That’s not “best since Burning Bridges”, that’s just best. The blueprint that has been in existence since the Carcass meets In Flames excellence of ‘Bury Me An Angel’, that has been refined and tweaked ever since, has been delivered on, Amott finally pulling it all together. Every strand of the past 18 years is woven together to create that defining moment, to create the Arch Enemy album.

One of the reoccurring criticisms of Gossow was that her delivery was monotonous and a touch sterile. Within the 3 minutes 45 seconds of opener ‘Never Forgive, Never Forget’ Gluz-White has shown she is evolution made flesh, a more than worthy successor who outshines her predecessor. She pitches a blackened throat roar from the off, before spitting out a venomous verse with a lash of hardcore, then flowing into a guttural, more metal chorus. She has range in her vari-growled delivery, and a point to prove; a point she makes continuously throughout the album: “I belong”.

If there is criticism of the newcomer, it is that her lyrics and song titles are a bit obvious and a bit, well, naff, but not to the point of distraction, and are more than compensated by the great work of duellists Amott and Cordle. Each song has riffs, chugs, motifs, refrains, leads, solos, but all working for the good of the song. When the guitar needs to push, like on the thrashy ‘Stolen Life’, they push, when they need to hold back, like on the anthemic ‘On and On’, they let the voice and the rest of the band take centre stage.

Every song is memorable in its’ own right. Every track has notable riffs, great motifs and at least one strong hook per tune, all excellently produced and played. If people still do that rock club thing of standing in a circle air-guitaring and shouting the vocals to each other, throwing heads back when the leads kick in, well, the title track is made for that. ‘As The Pages Burn’ rips from the start, before giving way to slower but extra meaty juddery chorus, while ‘No More Regrets’ and ‘You Will Know My Name’ are archetypical Arch Enemy anthems, taking the approach of a ‘No Gods No Masters’ or ‘Dead Eyes See No Future’, raging, catchy guitars and strong snarl on the vox.

Sometimes a change is as good as a rest. Sometimes even if it ain’t broke, fixing it can make it even better. 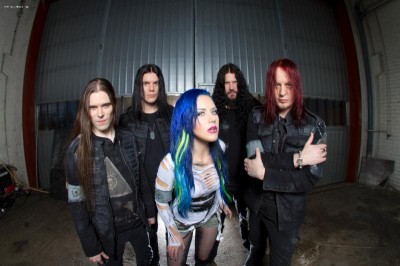