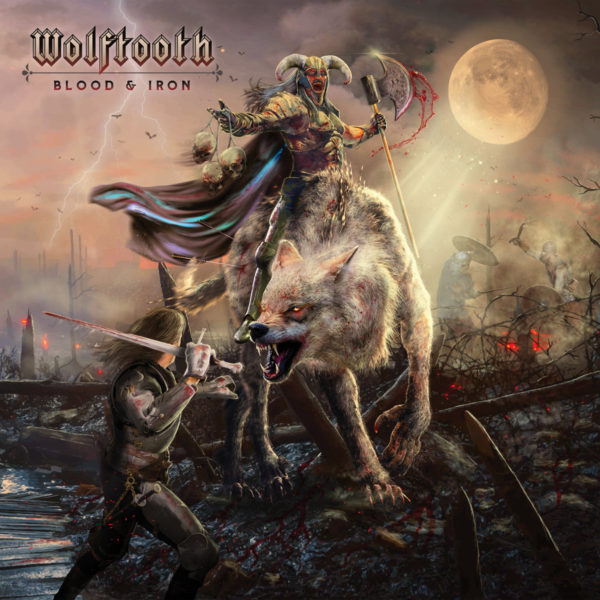 It would be a stretch to call Wolftooth’s third full-length a Doom Metal album, but Blood And Iron (Napalm Records) is a rather methodical listen by their standards. The songs run noticeably longer than their first two efforts, especially when compared to the compact anthems on Valhalla, with the seven-minute runtimes on the opening ‘Ahab’ and the title track being their lengthiest to date. The pacing also seems slightly more lumbering as the faster sequences have a sort of hesitation behind them and the hooks are decidedly more subtle.

This makes for a less immediate listen than past efforts, but we still get some great songs out of it. ‘A King’s Land’ is the album’s first major highlight, featuring a nice swagger in its mid-tempo swing. ‘Broken Sword’ and ‘The Voyage’ follow it up with fun upbeat gallops, though I must admit that they’d be stronger with harder hitting patterns of past staples like ‘Frost Lord’ and ‘Fear For Eternity.’ Thankfully ‘Winter White’ is another solid mid-tempo track with a tight chorus.

Unfortunately, Blood And Iron is bogged down by an unbalanced production job that undermines the band’s still rock solid musicianship. The rhythm section especially suffers from this, the bass not having as much of its gritty edge and the drums getting practically buried in the mix. Thankfully the guitars still shine throughout, putting in even more epic harmonies than before, and the vocals are still delivered with high-pitched efficiency. It may not be a dealbreaker for some, but the diminished power becomes hard to ignore.

Overall, Blood And Iron is a serviceable slab of Stonerized Heavy Metal. I must admit to being somewhat underwhelmed, especially when compared to the success of Valhalla and their 2018 self-titled debut, but that speaks more to how strongly those albums turned out. It’s possible that this will take a little extra time to feel out but seeing how Wolftooth’s biggest strength is their knack for crafting catchier hooks than their peers, they aren’t designed to be a “grower” band.

But at the end of the day, there’s still enough here for fans to get into. And with the band having maintained a tight momentum across a broadening platform, it’s easy to imagine they’ll come back with another winner.