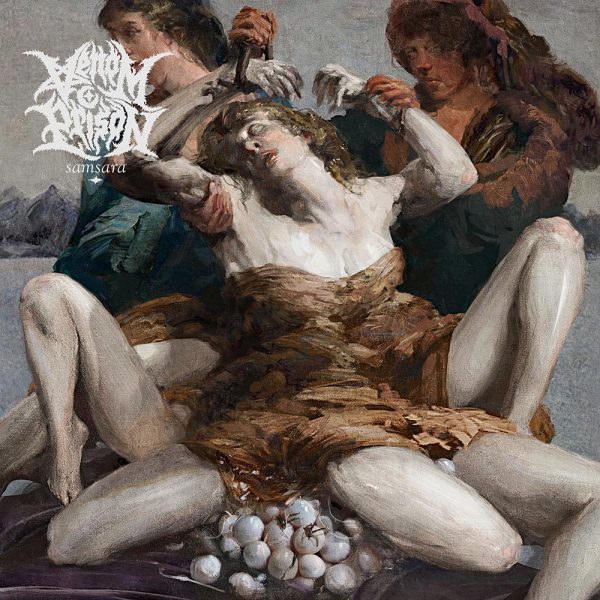 Animus’ reversal of more traditional Death Metal imagery was a breath of fresh air for many and a point of contention for others. Alongside tours with the likes of Trivium and Bloodstock main stage slots, Venom Prison garnered a large support base from fans and journalists alike, but it’s the ‘difficult second album’ that often causes younger bands to be ditched by the mainstream Metal press. There were those who debunked the band’s debut record as not much more than industry hype, but those people should brace themselves because Samsara (Prosthetic Records) will make the naysayers eat their words.

In stark contrast to its predecessor, Samara forgoes your typical minimalist “atmospheric” Death Metal opener and instead goes for a hammer blow to the skull in the form of ‘Matriphagy’, which sets the tone for Samsara going forward, and confirms that this is a much different beast compared to Animus.

Where Samsara does not differ from its predecessor is in how uncompromising it is in its brutality. It’s a different kind of intensity, however. Where Animus was more chaotic, Samsara feels more calculated in its execution. Rather than a scrappy, youthful explosion, Venom Prison’s latest offering is an impactful, measured burst of Florida Death Metal guitar worship, a legitimately spiteful vocal performance, and a pummeling ferocity that doesn’t give you a moment to breathe.

Larissa Stupar’s vocals are without question more varied and still utterly brutal this time around compared to the previous record, which felt more strained in their delivery but appropriate given the spiteful nature and themes explored on Animus. On Samsara, Larissa’s voice feels more dominating, commanding, yet bleak, creating a much darker record than we’ve experienced from Venom Prison in the past, with lyrical themes touching on more personal demons such as self-harm and suicide.

It’s terrifying in more ways than one, like with ’Implementing The Metaphysics of Morals’ where her screams that open the track feels so pained you can feel your own vocal cords start to tear. Even on ‘Dukkha’ she almost reaches pig-squeal levels of ferocity more commonly heard from bands at the tech-Death end of the spectrum. Not quite Wormed or Archspire levels of absurdity, but striking enough to stick out on a record full of brutality.

What is clear from the outset is that any criticism thrown at the band on Animus for being too reliant on Hardcore stylings, resulting in them being lumped in with the Deathcore crowd, is immediately evaporated. Samara is a Death Metal album through and through. ‘Self Inflicted Violence’ might as well be a Cannibal Corpse song with its catchy groove-laden riffs, its love of thunderous blast beats and, most importantly, its shredding solos.

There’s even an underlying creepiness to some of the solos as well, ‘Dukkha’ in particular feeling reminiscent of Haunting The Chapel era Slayer. Those Hardcore influences still exist, such as in the mid-tempo stomp on ‘Asura’s Realm, but it’s just another dynamic layer that only adds to the savage barrage of noise.

Whether or not Animus made you a believer or not, it’s hard to deny that it set up a framework for something greater. Samsara has taken those elements that made Animus noteworthy and turned them up to eleven, giving us an uncompromising blast of raw, unbridled aggression that stares directly into the murky darkness of modern society.