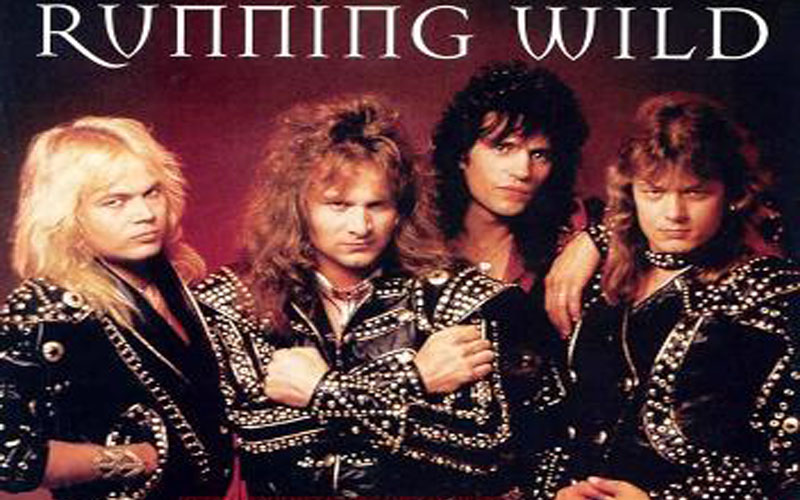 For some of us Heavy Metal fans of a certain vintage, there exists a memory most tactile and warm; that of visiting record shops that sold vinyl by the rack load, and bloody cheap too. And one Saturday morning while absconding from Spanish GCSE duties, I stumbled up Running Wild’s Branded and Exiled in Time Records, going for less than the cost of a portion of chips (an additional option that was no doubt taken up later in the day).

After sniggering at the cheap looking cover and not-quite-there logo, tittering at the camp ‘tasche, hand-on-hip and mop-top combo of one of the band members, chuckling at there being a song called ‘Chains and Leather’ and outright guffawing at the act being led by someone actually calling themselves Rock n’ Rolf (as vocalist/guitarist/mainman Rolf Kasparek is/was known) it was an inevitable purchase.

Don’t get me wrong, I love all those things about it, but this was 1992. Grunge had happened, and much as I dug the Heavy Metal ethic, bedecked in my overgrown barnet and denim jacket with pewter badges combo, there was still an element of sneering. Nonetheless, a warm affection for Running Wild was developed through that 12” album that I still proudly have, though I never followed through with picking up much more of their catalogue. But this affection was one that was reignited several years ago with a rediscovering of their back catalogue via a recommendation on an online forum, starting with the album that concludes this nine-album reissues set, Masquerade… But we’ll get to that in part two…

Now in 2017, forty years after the band’s conception, our tale takes us back to a new beginning. But just how does the first part of Running Wild’s legacy stand up on reissue? First, it is worth noting the old adage around polishing and the outcome of a certain bodily function, meaning that no amount of love and technical wizardry is going to result in the production on début album Gates To Purgatory sounding anything other than thin and dated. Yet, despite this, there’s a definite rough charm to the Hamburger’s first outing. The drums sound like cardboard, the guitars anaemic and barely worthy of the name, and Rolf’s vocals lack conviction (and the right notes at times), yet despite it all, there’s a defiant charisma and a tangible ich weiß nicht. 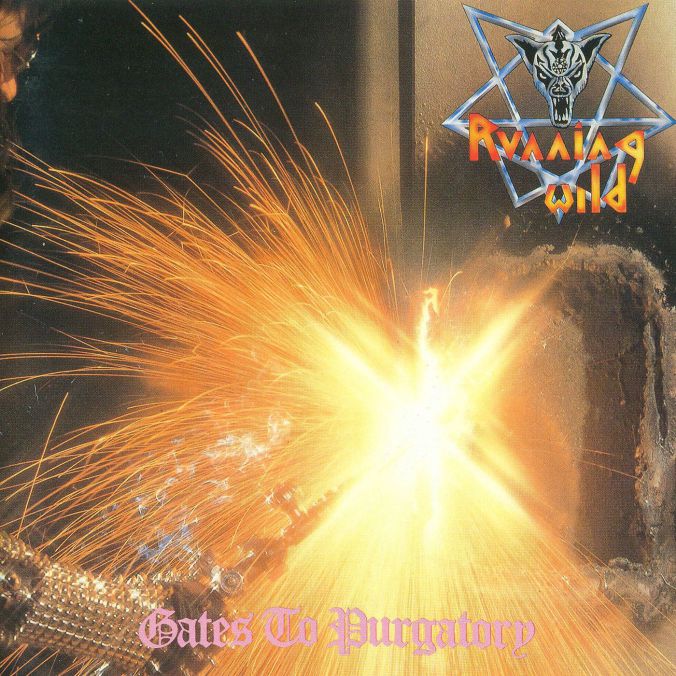 Like several of their Teutonic counterparts (it is a contractual requirement to use the phrase Teutonic in any review of older German Heavy Metal bands), it was to Judas Priest (the band name is taken from the track from Killing Machine) more than anyone else that the ‘Wild took their biggest influences while crafting their first dose of hard rock meets proto-speed metal, even if only ‘Adrian S.O.S.’ really showcases the quality that was to come later.

At this point, I’d like to add, I’m not normally a Bonus Track kinda guy, but the extras on Gates…, and the extensive historic detailing by Kasparek and journalist Malcolm Dome in the extended booklets, including track by track synopses are a worthwhile and a very interesting addition, not just here, but all throughout the series. [6.0]

Which brings us chronologically to the aforementioned Branded and Exiled, source of my bemused teenage-self forming a bond with the band over twenty years ago, an album that saw Rock n’ Rolf without his writing buddy, as Preacher departed, ironically, to become a priest after not believing the band were making enough money. With a title track and the closing ‘Chains And Leather’ as bookends, Branded… is a step up from its predecessor, most notably in the development of the bands focus on raw, jagged riffing. Rough and ready, nonetheless, album two was vital in the formative years of Running Wild [6.5] 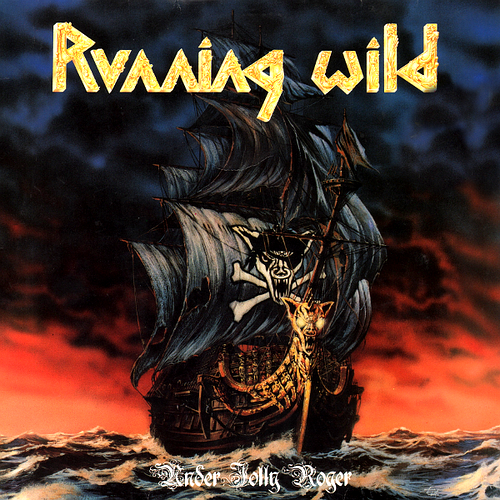 A double-CD set, the reissued Under Jolly Roger is particularly notable for two reasons; the first, the bands ditching of cod-Satanic imagery and lyrics in favour of the “Pirate Metal” theme they were to become synonymous with (even if only one track on the album is pirate themed, for the pedants), but also for the bonus tracks which show starkly the story of this nonet of releases… It’s irrefutably true that, as a band, musicians and recording artists, Running Wild get better as they go on through their first nine albums, (spoiler alert) peaking with album nine, and if fate had been kind enough to have led them into the studio sometime around 1995 to re-record their back catalogue to date, it would have been a glorious thing, for the re-recordings of several of the tracks not just on Jolly Roger but the remainder of the series (with re-recordings ranging from 1991 to 2003) produced some quite vibrant and definitive versions; proving the quality of the song-writing the band had, even if sound and/or performances on the respective albums had let them down at times.

Under Jolly Roger is rightly regarding as something of a cult classic. ‘War In The Gutter’, ‘Beggars Night’, ‘Diamonds Of The Black Chest’ are all examples of exactly what Running Wild do better than most – energetic, repetitive riffs, barked verses, and memorable choruses leaning equally on Hard Rock and Speed Metal. RW also establish further their habit of an anthemic opening title track. While an upping of the ante by Rolf in the riffing department exposed flaws in bassist Stephan Boriss and the ploddy poor-man’s Les Binks drumming of “Hasche” Hagermann that were to some extent covered up by the energy and emerging confidence of Kasparek, Running Wild had succeeded in defining themselves as a distinctive entity. Kasparek’s Kai Hansen-esque vocals were becoming a defining characteristic, when before they had been a weakness, his technique and ability to find and deliver a hook increasing [7.5] 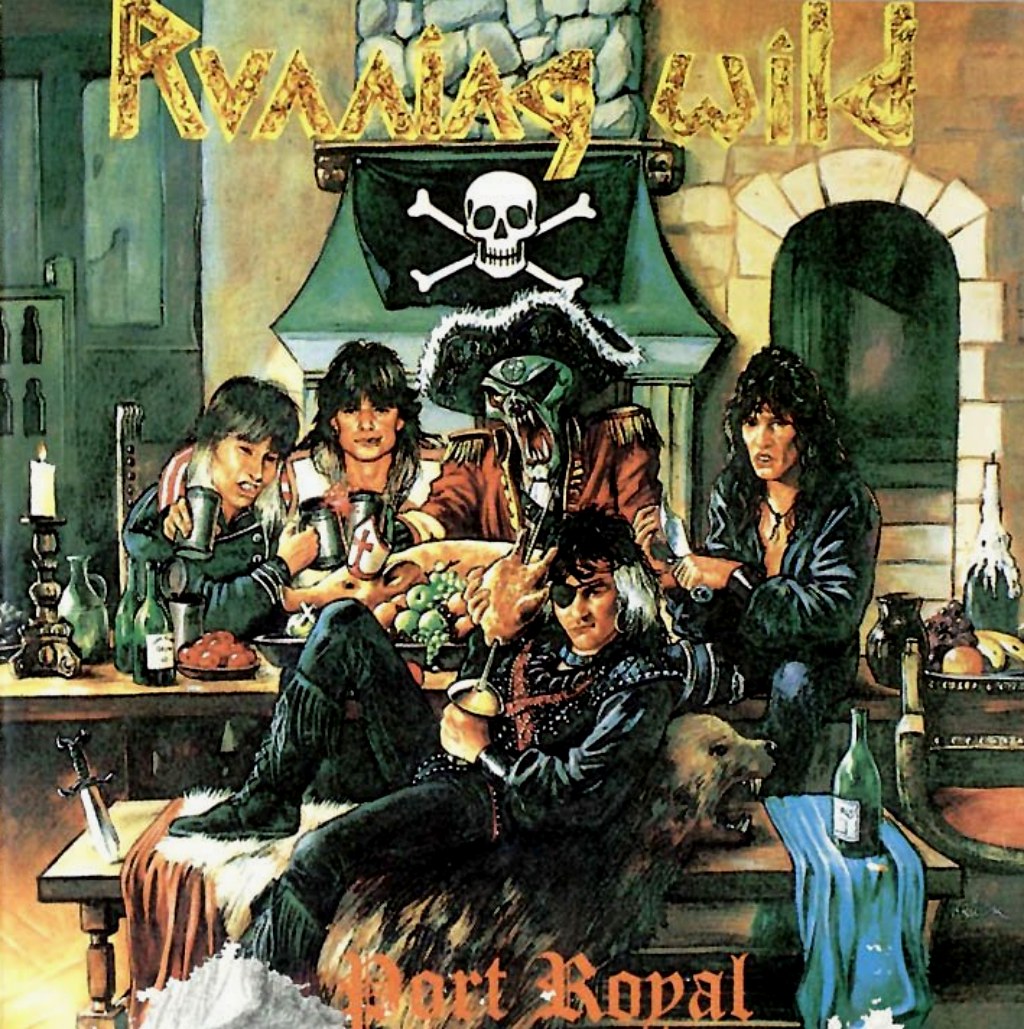 Yet those negatives were to be erased when the next pieces of the jigsaw puzzle were slotted into place on Port Royal as, for the first time, Rolf has a heartbeat behind his freewheel burning riffage to inject the necessary energy, with Stefan Schwarzmann (Accept, Helloween) adding that trademark lively, authoritative drumming that is, now, an integral part of Running Wild at their best. And speaking of Running Wild at their best, Port Royal is Anthem City, with ‘Conquistadores’ serving as a highly popular video and lead-off track that is still one of the bands’ best to date. The album, though, is strong throughout, with particular mention to ‘Final Gates’, one of my favourite (non-Maiden or Metallica) instrumentals, a quirky bass-led number that links from the powerful and spiky ‘Uaschitschun’, proof that upgrading band members to ones with a requisite level of ability is a MUST to compete; Jens Becker who would go on to Grave Digger delivering the four-string goods.

By now the Running Wild formula had been mixed into one tasty cocktail of a serrated, uptempo riff that fashioned the core of the song accompanied by relentless, powerful drumming and clever guitar motifs, with Majk Moti now feeling at home on his third full outing with the band. Ending on the bands first foray into crafting an epic, their first track coming in at over eight minutes, and housing several excellent Heavy Metal tunes, Rock n’ Rolf was up and firing the cannons boldly. [8.5] 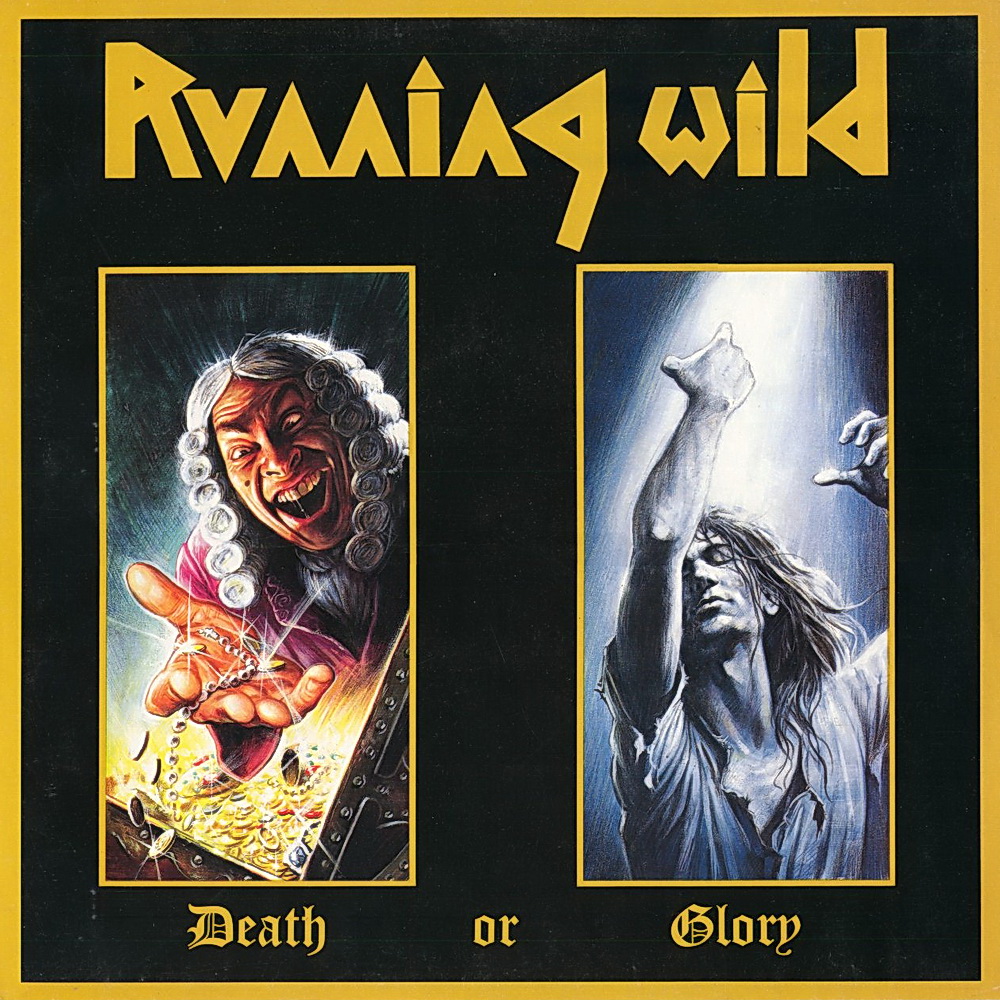 With Port Royal a success, fifth album Death Or Glory, first released in 1990 and marking the culmination of the first chapter of Running Wild’s career, was released with no small amount of expectation, and despite a backdrop of in-fighting between Becker and Moti and another change on the drum stool (Schwarzmann had left to join U.D.O. though new drummer, Englishman Iain Finlay was actually proving a valuable writing foil for Rolf), Running Wild delivered a strong set of songs, on an album littered with some really strong moments. Lead off track ‘Riding The Storm’ is a pure grin inducing Heavy Metal rager, ‘Bad To The Bone’ and ‘Tortuga Bay’ invoke the banging of fists, and the title-track lives up to the reputation of its predecessors. [7.5]