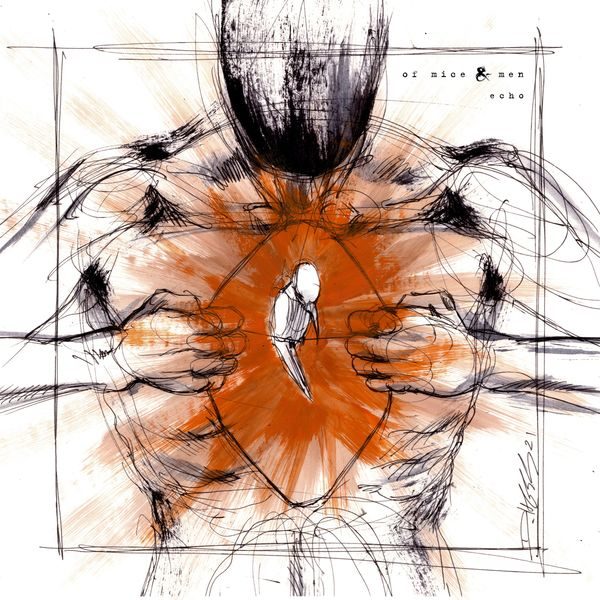 Of Mice & Men’s Echo (Sharptone Records) exemplifies exactly how a band should sound by their 7th album. It doesn’t even matter what song you start with—It’s blatant you’re hearing a band that knows their identity and is confident in it. At the topic of identity, nearly 6 years later, it’s still hard to ignore how deeply rooted Of Mice & Men’s previous frontman was to their image. However, Echo stands as a testament to how wonderfully they’ve evolved under Aaron Pauley’s leadership. Though Echo is Pauley’s third album serving as a vocalist, it marks the band’s first full-length release under Sharptone Records, effectively forging a new era for the metalcore titans.

If there’s any criticism to be made, it’s one that can be made of many of their peer bands as well. Not enough songs on this record commits to completely clean vocals, which is frankly a shame given how beautiful Pauley’s voice is. Beguiling tracks of “Fighting Gravity” and Crosby Stills & Nash cover “Helplessly Hoping” give us an idea of what could’ve been had the screamo been used more sparingly.

However, combining floral language and harmonious vocals with monstrous stories and discomposing screams is it’s own artform. While songs like “Obsolete” and “Mosaic” showcase what OM&M can do with the latter, some of the most striking and memorable songs on this record encapsulate this sentiment in its entirety. This includes “Bloom”, “Pulling Teeth”, and title track “Echo”. The name Echo was chosen for this album as it serves as a memoire of reflection. Despite looking into the past, it feels like the album’s initial track “Timeless” better describes the legacy of this mastery.

Much of the lyrical content here isn’t new. In fact, it’s rather cliche; “It can’t rain all the time” sentiments, flower and gravity based alogories, and recycled idioms for agony and survival. Maybe the breakdowns and chugs aren’t the most groundbreaking ever either, but what OM&M has proven with Echo is that you don’t have to reinvent the wheel to create something remarkable. The amount of fluidity, composition, and overall raw talent that went into this is proof Of Mice & Men has earned their standing—And, perhaps, they’re overdue for more recognition than they’re given. As said before, this record is and will be timeless.