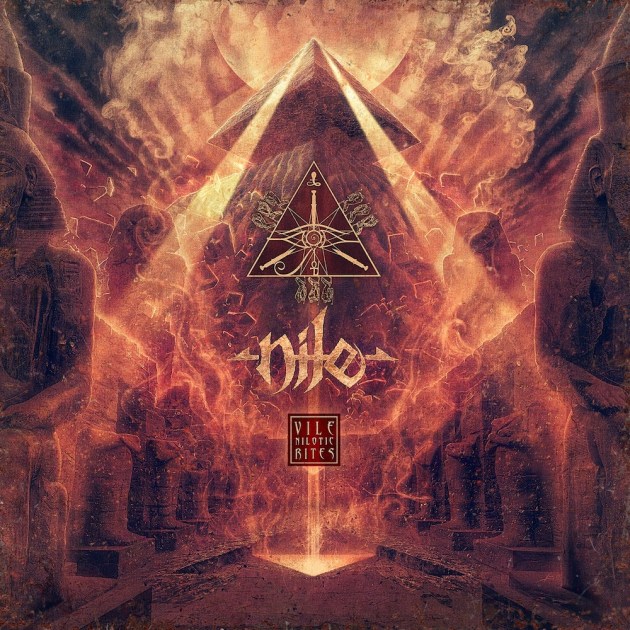 When bands replace key members of personnel, it can take some time for the new line-up to settle. First albums back can be cagey affairs as confidence and momentum are often exchanged for uncertainty and caution. However, what becomes clear almost immediately with Vile Nilotic Rites (Nuclear Blast Records), the latest offering from US Death Metallers and aficionados of ancient Egypt, Nile, is that no such problems exist here.

As much as former guitarist/vocalist Dallas Toller-Wade had been an integral member of the band for twenty years, his replacements, bassist/vocalist Brad Parris (who had laid down vocal tracks on the band’s previous album) and guitarist/vocalist Brian Kingsland have jumped straight into the void left by the follically challenged axeman, and in purely technical terms, absolutely fucking smashed it. Alongside founder member Karl Sanders, the pair have enmeshed themselves, instantly and effortlessly, into the structure of the band, offering a new burst of life and creativity, not to mention a classic Nile triple vocal attack reinforced by the unrelenting blastbeat battery of Greek sticksman George Kollias.

Beginning with a vicious plunging riff, ‘Long Shadows of Dread’ soon becomes a more expansive beast, its slow doomy grind dominated by a sepulchral atmosphere and punctuated by a needle-sharp guitar solo. Based on a book/documentary about the Nazis, the brilliantly titled ‘The Oxford Handbook of Savage Genocidal Warfare’ smashes you repeatedly across the face and continues its brutal pummelling until its final destructive note.

Inspired by the prematurely cancelled HBO TV show Rome, the predatory title track is driven by a mid-paced beat overlaid with fast riffing, the tension heightened until the eruption of a piercing solo which sounds like the scurrying of rats behind stone walls. After an orchestral opening, ‘Seven Horns of War’ finds the band tapping a more experimental vein. Typically insane drumming and frantic riffery give way to a miasmatic middle section as the song pauses for breath with atmospheric ritual chanting before upping the drama once more with choral backing and Lord of the Rings-style horns.

Opening with a riff even more Egyptian than the most Egyptian thing ever, ‘That Which is Forbidden’ is nothing short of monstrous, while ‘Snake Pit Mating Frenzy’ is a writhing serpentine ball of venomous riffs, twisting and contorting until its vicious fanged climax. ‘Revel in Their Suffering’ is just under six minutes of no-nonsense pulverizing brutality featuring choral backing and some fiercely middle eastern soloing. ‘Thus Sayeth the Parasites of the Mind’ is a short interlude about zombie ants which, with its use of Turkish Bağlama Saz, could have come from either of Sanders’s solo Saurian themed albums, and ‘Where is the Wrathful Sky’ is resplendent with gladiatorial riffs and staccato drumming. The penultimate track, and one of the album’s undisputed highlights, ‘The Imperishable Stars Are Sickened’ is eight minutes of epic Egyptian brutality complete with ritual chanting and clean vocals, before ‘We Are Cursed’ ends the album with a cataclysmic shudder.

A triumphant rebirth for the band, in some ways Vile Nilotic Rites is almost a complete reinvention. Chaotic bursts of apocalyptic speed are tempered with cavernous slower sections and stygian chanting which rise up from beneath its ever-shifting sands. Blessed with a great production – clinical but organic, clean but not dry – there’s no mid-album sag, and no front-loading or end of album drop-off.