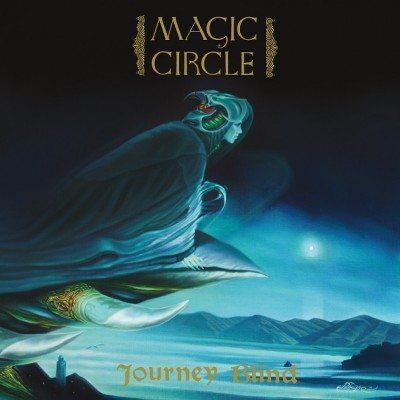 Though it was released it little fanfare, Magic Circle’s self-titled debut was an unheralded highlight of 2013. A combination of classic Sabbath-infused doom a la Trouble or Pentagram unafraid to inject the energy and melody of your favourite heavy metal bands, it was satisfying in all the right ways. The Boston quartet’s sophomore album, Journey Blind (20 Buck Spin) has received significantly more press, and ups the ante.

Where almost every song on the debut was built around a long, slow build-and-release dynamic, Journey Blind shows far more variety in the song-writing without compromising quality. It’s still boasts that raw 80s-souding production, and the likes of the title track and ‘Ghosts of the Southern Front’ still lumber on before kicking things up with blazing NWOBHM riffs, but the album also boasts some shorter, high tempos numbers.

The likes of ‘The Damned Man’ and ‘Lightning Cage’ – both of which are blessed with annoyingly addictive lines that make it hard not to squeal along – act as perfect foils to the longer, more intricate numbers. The epic seven minutes of ‘A Ballad for the Vultures’ is probably the best song the band has recorded yet, boasting a host of riffs that bring to mind Dio-era Sabbath and Iron Maiden gallops, a flurry of reverberating solos, while the vocals are out of this world.

Vocalist Brendan Radigan, for a long time found snarling exclusively for punk outfits such as the Rival Mob, has in recent years shown he’s more than capable of sounding like an air raid siren fronting a NWOBHM band: like a cross between Ozzy Osbourne and Eric Wagner, he wails his way through the album but never ends up in a comedic “someone stood on my balls” scream that so many retro-revivalist bands seem fond of.

As with their debut, Magic Circle have shown off a rare skill; making an album that could easily be mistaken for a lost classic from the 80s, yet doesn’t feel outdated or like a rehash. It’s everything you want from an album; energetic, addictive, fun, epic, and incredibly satisfying: A combination of timeless song writing and faultless quality makes Journey Blind one of the best records of the year. Go and buy it. Treat yourself for Christmas. Buy your gran one too.