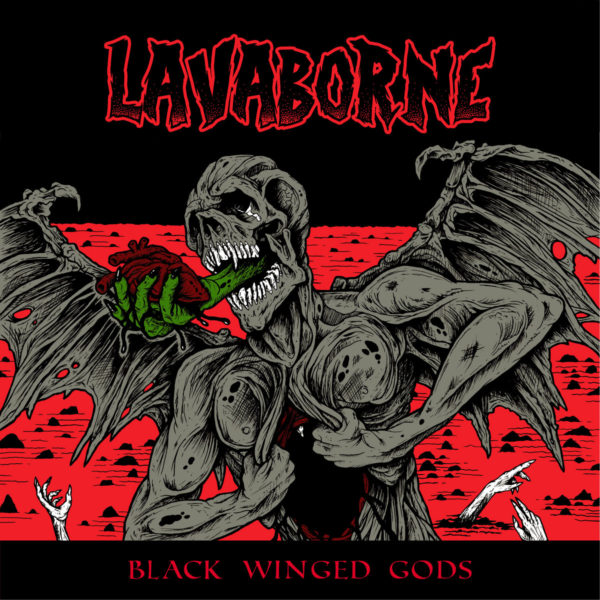 The last few years have been very good for Trad Metal bands and their fans. Be it the maturing of the old school heavy metallers, or the young hipstery bizarro mustachio, vest metal crew that have formed a new age fanbase, it’s been heartwarming to see a horde of fans support so many worthy bands of late. One that has gotten on my radar the last few years is Lavaborne; mid-western warriors who eschew the vanilla tropes of the style in favor of originality, top songcraft, and true Trad reverence.

On their new album Black Winged Gods – (Wise Blood Records) they run the gamut of emotions and riffs in just ten tracks. The majestic opener “Call To Worship” sets the table before welcoming you to “The Heathen Church”. No BS; just pure musical fury. Riffs, great vocals, thrashy tempos, and fantastical lyrics. Right from the jump, this band shows their skills.

Firmly ensconced in all that is metal, the band effortlessly shifts from Thrash, all the light and shade of Stoner Doom, and back to a more epic, classic sounds. I have to single out Brandon Signorino and Freddie Rodriguez as a guitar duo to be reckoned with. Not only to that lay down the base of riffs-o-pedia for the tracks, there is some downright lovely playing on here, layered in deep just to reward for repeat listeners. So many tasty licks and riffs and the occasional harmonized solo too to make guitar fanatics cream their skinny jeans. Not just a lot of flashy antics, Lavaborne are top songsmiths, with catchy songs, many a hook-laden chorus, and even hummable double bass patterns by drummer Max Barber (who also produced the album) that I thought was only a thing for Dave Lombardo nerds. In fact, Barder and bassist Brandon Davis hold it down tight on all the tracks.

In addition to the killer songs, the centerpiece of the album is vocalist Chris Latta. With his dusky, haunted howl that lands for me between Al Cisneros of Sleep and OM, David Gold (RIP) of Woods of Ypres, and sometimes Peter Murphy (Bauhaus), it is hard not to be drawn into his world of these tales with such a compelling delivery.

The top track of the album for me is the balls out boogie of “The Great Reward,” but “Mortal Pride,” the fantastic title track, “Master of Medusa,” and the grandiose “The Final Reward” are all bangers.

Also, shout out to the band for this amazing cover art, totally nailing the vibe of the music! Wow! Lavaborne is just scratching the surface of where they can take their music, and the rising tide of the genre may carry them to even greater adventures yet!

But the album here: https://lavaborne.bandcamp.com/album/black-winged-gods