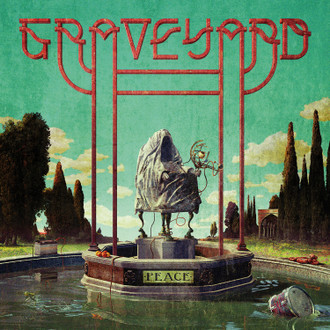 After announcing that they had broken up for all the classic “differences within the band” reasons in 2016, Swedish Retro Rockers Graveyard are back together, armed with a new album, and sounding as raw and melodic as ever.

With 2011’s Hisengen Blues and 2012’s Light’s Out, the band crafted genuine back-to-back classics; the former an education in classic high-octane rock, and the latter a lesson in raw, slow blues. Six years on, the band’s fifth album, Peace, mixes moments from the two and occasionally reaches the same level of quality, but also stumbles on occasion.

Whether doing fast Rock n’ Roll or slow blues, Graveyard’s selling point has always been no-frills stripped, back Rock, and in the flesh the band are unstoppable; their recent set London’s Desertfest was little short of magnificent. And while on record they’ve usually delivered the same, it’s sometimes hard to maintain your own high standards. Ghost Cult’s review of Innocence and Decadence (all Nuclear Blast) was complementary without lavishing the album in praise and there are more than a few moments on Peace that are perfectly ok but feel flat compared to the album’s high points. Opener ‘It Ain’t Over’ makes a barnstorming entrance; a pure rock and roller that harks back to the days of Hisengen Blues; a swirling rocker that reminds the listener how good this band can be – and how good Joakim Nilsson’s vocals are – and it’s easily one of the best tracks on the album. Many of the best moments -‘Cold Love’ and ‘Please Don’t’ – are Heavy Rock songs with a satisfying gallop, and there are plenty of good moments. ‘Walk On’ might be the album highlight; a slow burner that builds on a relentless beat into a song with real swagger.

There are also a few duds, however, placed at inopportune moments that jar the listener. ‘See the Day’ sees bassist Truls Mörck take vocal duty, and it sucks out a lot of the early momentum the previous songs have built. ‘Del Manic’ is another slow bluesy number in the style of ‘Lights Out’ but is not up there with their best. ‘The Fox’ is decent; an average Rock song elevated by Nilsson’s passionate croak, though ‘Birds of Paradise’ is another average song with Mörck on vocals that just passes by. Final one-two of ‘A Sign of Peace’ and ‘Low (I Wouldn’t Mind)’ end on a high; the former a solid straight ahead rocker, while the second a mix of relentless driving rhythm that builds to a crescendo of screams and squealing guitars.

There’s no shortage of bands doing the ‘classic’ rock and roll thing. There are few, if any bands, who do it as well as Graveyard. While better than Innocence and Decadence, it’s fair to say Peace is imperfect but still has more than enough quality moments to be incredibly enjoyable.