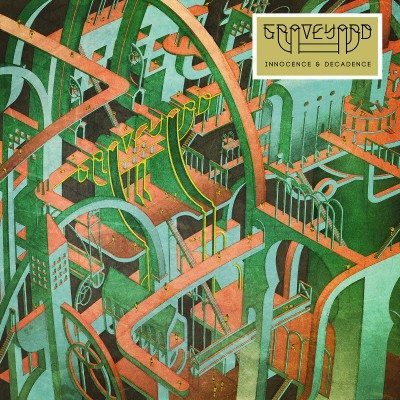 Over the course of a few albums (this one being the latest and fourth), Sweden’s Graveyard have both bypassed and embraced the “retro” tagline they have been lumped with from day one. Never proving nor looking to be a musically revolutionary band, they wear their influences firmly on their sleeves with their brand of familiar and instantaneous blues-rock. At the same time they are more than just a nostalgia act as Innocence And Decadence (Nuclear Blast) shows, they have some individuality of their own.

On the face of it this may prove straight- forward blues-rock which sticks to a recognisable formula (in a positive sense), but scratch deeper this proves a moodier and darker effort than in previous. Innocence And Decadence sees further exploration of their psychedelic and stoner influences alongside moments of pure melancholy next to some upbeat moments. Album opener ‘Magnetic Shunk’ begins with a slow, stoner crawl which proves the album’s only lapse before half way it picks up in to a more confident and catchy strut. The likes of ‘Exit 97’ and ‘Too Much Is Not Enough’ are slower numbers which encapsulate the bleaker side of blues, whilst ‘Hard-Headed’ begins with a brief, but destabilising fuzz of feedback which invokes some of their heavier peers.

All the while this sounds instantly recognisable as their own and is very catchy and immediate throughout. A significant improvement on the previous Lights Out (Nuclear Blast). It feels much more confident in exploring their further influences whilst not deviating too far from their sound, and most importantly it never falters in quality throughout (bar from the slight misstep at the off). As much as they are proud of their classic influences, the want to seek new styles sees them as so much more than a retro band.