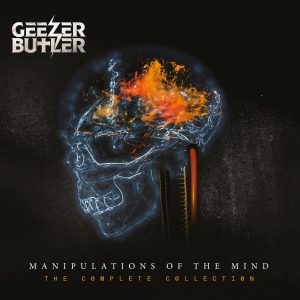 Having stayed with Black Sabbath until 1983’s unfairly criticised Born Again (Vertigo) album, founding member Geezer Butler returned to the band in the early nineties but with a growing desire to prove himself as a solo artist. After leaving again in ’94, the iconic bass player and moustache enthusiast teamed up with former frontman Ozzy Osbourne for a while before eventually going it alone to form G/Z/R.

Recruiting guitarist and fellow Brummie Pedro Howse and former Bad English drummer Deen Castronovo, the line-up was completed by none other than Fear Factory frontman Burton C. Bell and 1995’s Plastic Planet (TVT/BMG) was the result. Taking their cues from the likes of Machine Head, Pantera and of course Fear Factory and Black Sabbath, songs like ‘Drive Boy, Shooting’, ‘Giving up the Ghost’, ‘X13’ and the title track embody entirely the chunky, groove based metal of the ’90s while cuts like opener ‘Catatonic Eclipse’, ‘Séance Fiction’ and trippy closer ‘Cycle of Sixty’ owe just as much to his former flared trousered colleagues.

Shortly before climbing aboard the Sabbath reunion train in ’97, Butler re-enlisted the help of Howse and Castronovo for his second solo record but chose American singer Clark Brown to replace the busy Burton C. Bell. Taking a more diverse approach, the Faith No More style eclecticism of Black Science (TVT/BMG) allowed Butler more scope to his writing. From the drum and bass jazz jam of ‘Northern Wisdom’ and the schizophrenic ‘Unspeakable Elvis’, Butler tips his cap to some of his favourite TV shows with songs such as ‘Man in a Suitcase’, ‘Department S’, ‘Mysterons’ (Captain Scarlet) and ‘Among the Cybermen’ (Doctor Who). Writing about more personal matters, ‘Number 5’ recalls with some bitterness how things changed in his home town while on the punky and aggressive ‘Trinity Road’ (home of his beloved Aston Villa FC) he seems fed up with pretty much everything and just wants to go and watch the football instead.

Released in 2005, Ohmwork (Sanctuary/BMG) reverts to the original G/Z/R band name, keeps Brown on vocals and Howse on guitar but finds Castronovo replaced by Chad Smith of Red Hot Chili Peppers. Not quite as heavy as the previous two outings, Ohmwork is still full of piss and vinegar, especially on chunky opener ‘Misfit’ and the Alice in Chains-esque grind of ‘Pardon My Depression’. ‘Prisoner 103’ and ‘Pull the String’ drip with Nu Metal angst while ‘Aural Sects’ sees Brown channelling his inner Marilyn Manson. Nu Metal is clearly a big influence here but instead of just repeating popular patterns, Butler adds Sabbath licks and old school thrash into the mix along with ’90s Alt and Grunge.

Released as a compact box set, each disc of Manipulations of the Mind is presented in its own card slipcase, the package also boasting a twenty page colour booklet and a bonus disc crammed with alternative takes, instrumentals, different mixes, radio edits, demos and live versions.

Acting as a companion piece to the above box set, The Very Best of Geezer Butler (BMG) is a seventeen track collection hand-picked by the man himself. Taken from each of his three solo albums, highlights include ‘Drive Boy, Shooting’, ‘Man in a Suitcase’, ‘Box of Six’, ‘Pardon My Depression’, ‘Mysterons’, Aural Sects’, ‘Detective 27’, ‘Catatonic Eclipse’, ‘Among the Cybermen’ and ‘Plastic Planet’. Whether you’re after the entire back catalogue or just a specially collated greatest hits package, either way Geezer has you covered.

Manipulations Of The Mind: https://geezerbutler.lnk.to/manipulationsofthemindPR

The Very Best Of: https://geezerbutler.lnk.to/verybestofPR