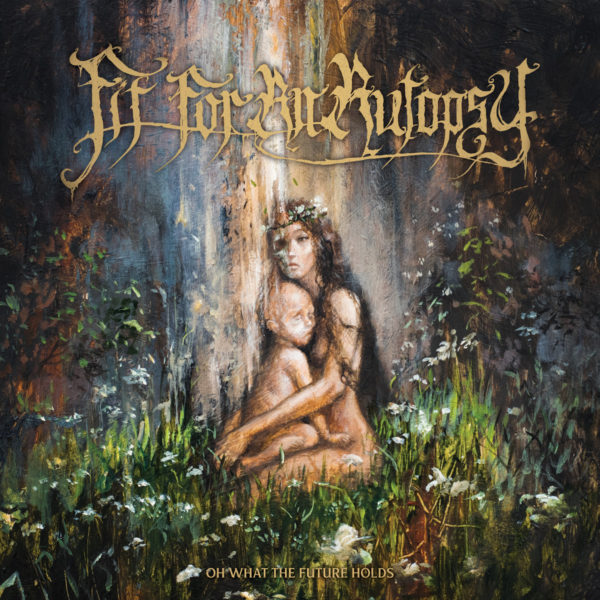 The levels of frustration felt by New Jersey HEAVY Metalcore merchants Fit For An Autopsy can only be guessed at, though it doesn’t take much to speculate that by the time they were heading into the studio in 2021 they were feeling pretty hard done by. With worldwide high-profile touring and festival slots planned on the back of the universally acclaimed and sound-perfecting opus The Sea Of Tragic Beasts (Nuclear Blast), instead of riding a tidal wave of riffs and show-stealing gigs, a COVID enforced grounding put the shackles on plans if not for world domination, then a serious amount of scaling up.

The groundwork had been put in, particularly by 2017’s crushing deathcore-with-songs The Great Collapse (eOne), and had been realised by the evolution, power and devastating colour of …Tragic Beasts two short years later. Just as they should be seeing the benefits of their labours in an ever-increasing writhing mass of pit bodies at their shows, the wave of optimism and touring opportunities was swept away from them.

Which makes it perfectly understandable that Oh What The Future Holds, their second release for Nuclear Blast and sixth overall, has taken a turn to the dark side.

There are two overriding themes to the song-writing that are evident and that emphasise this embracing of the gloom that reflects the last two years of human existence. One is that this is a fucking bruising album – the production is thick, hulking, and claustrophobic with a steady relentless exhausting body punch of a tone and riffing style. While moments of pace and impetus do tear through the sludgy oppression, particularly on late album warrior ‘Savages’, the main sweet spot is in a relentless bludgeon.

The other is the increasing Gojirafication of the FFAA sound, an influence that had always been fairly covert until …Tragic Beast brought it more to the table, though more as a quiet guest than the co-host it has become. If you’re not being left clutching yourself, coiled in the fetal position coughing after another gut punch of a section, you’ll be witnessing the discordant, yet more spacious (and evidently less heavy) elements that lean close to the quasi-hypnotic templates utilised by the Duplantier brothers – even vocalist Joe Badolato has brought his cleans more in line with the style and types of melodies Gojira excel at.

Expectation is high, coming on the back of two albums that increased not just FFAA’s commercial profile but that also raised the bar on the standards of their musical output. A lot of bands would have run with the style that proved successful on …Tragic Beasts, perhaps splashing more colour, working on catchier choruses or emphasising some of the grooves, so it is to the credit of FFAA that they have chosen to step to the side rather than cynically stride forwards into more mainstream writing tropes. That said, and not aided by a tracklisting that downplays the dynamics at each opportunity (‘Far From Heaven’, one of the less intense, cleaner vocal tracks, is misplaced at track three, a spot the aforementioned ‘Savages’ or the blackened technicality of ‘In Shadows’ would have better filled, for example, and the opening title track almost feels unfinished such is its half-song arrangement), Oh What The Future Holds does feel like a side-step down a denser path rather than a step forwards in the vein of the advancements of its two predecessors.

Time will tell, but there is a nagging feeling that, fast-forwards five years, and it won’t be this album that will be the mainstay of their live set, as strong, muscular, dense and imposing as most of it is. This won’t hold FFAA back, though, and nor should it. The good will is there and has been well cultivated, and there are enough crushing and devastating moments on display to more than satisfy the hordes, all of which will be particularly evident once the band are able to get back on the road.