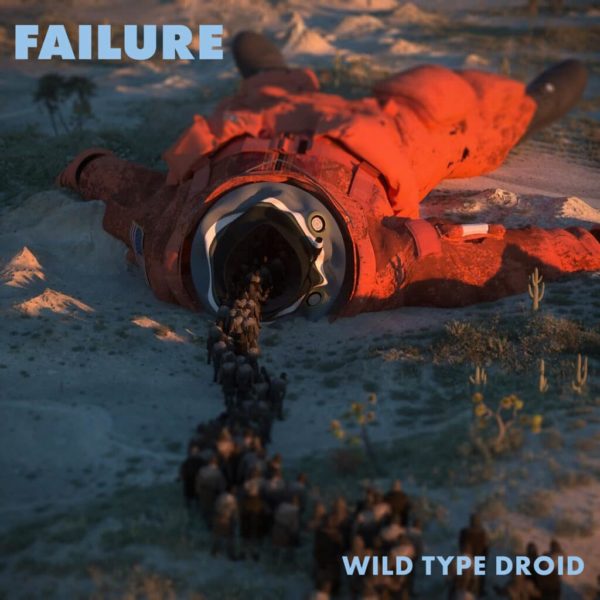 Failure’s sixth album and third since their 2014 comeback is considerably scaled back compared to their previous outings. At just under forty minutes long, Wild Type Droid (Failure Recordings) is their shortest full-length since their debut, 1992’s Comfort, and a far cry from the hour-plus ventures that have come to define them since the classic Fantastic Planet. This setup suggests a more casual approach than usual but instead results in one of their most focused releases to date.

With 2018’s In The Future Your Body Will Be The Furthest Thing From Your Mind exploring the spacey aspects of their Alternative/Space Rock sound, it only makes sense for this album to continue down the same path. The musicianship reflects this dynamic; the guitar and bass provide contrasting roles that fill each other out quite nicely, the former frequently providing atmospheric textures with the very occasional crunch and the latter putting in much of the weight. From there, the drums serve as a smooth meeting point with lush, abstract patterns and the vocals are consistently delivered in a dreamlike, almost gentle timbre.

That consistency is also reflected in the songwriting as each of the ten tracks is driven by compact, straightforward structures. While this rather uniform approach could come off as one-dimensional, it still allows for individual standouts that play into a cohesive whole. ‘Bring Back The Sound,’ ‘Undecided,’ and the closing ‘Half Moon’ provide some introspective moods while ‘Bad Transition’ has the effect of sounding incredibly heavy without being overtly aggressive. Elsewhere, ‘Water With Hands’ and ‘Headstand’ establish a uncertain but pleasant note from the get-go and the flow between ‘A Lifetime Of Joy’ and ‘Submarines’ is especially smooth.

While Failure has maintained a very strong track record, especially during these recent comeback years, Wild Type Droid is one of their most effective efforts to date. The chill vibes in combination with the accessible structuring make for an initially inviting listen that is further rewarded by stellar musicianship and subtly masterful songwriting. An album from their early years like Magnified or Fantastic Planet may be the most proper entry point into the world of Failure, but Wild Type Droid is more than worthy of exploration.