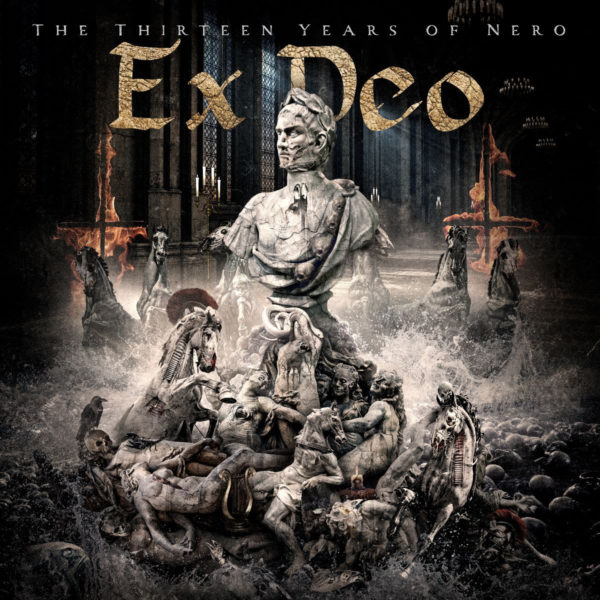 Four years after regaling us with stories of Carthaginian General Hannibal on The Immortal Wars (Napalm Records) Canadian/Italian death metal act Ex Deo return with more tales of ancient Rome on fourth full length release The Thirteen Years of Nero (also Napalm). As its title suggests, the central theme this time is the reign of Imperator Nero Cladius Divi Claudius filius Caesar Augustus Germanicus (or plain old Emperor Nero to his friends) and the matricide, uxoricide, blood, fire and death which followed him.

Beginning with actor Charles Laughton‘s speech from the ill-fated 1937 film version of I, Claudius, monstrous opener ‘The Fall of Claudius’ kicks things off with pinch harmonics, slow pulverising brutality and sweeping orchestration. Aided by Clemens Wijers (Carach Angren, Lindemann), the instrumentation and arrangements, especially on the opener and ‘Imperator’ echo the late Michael Kamen while ferocious riffs crush all before them like a legion of imperial guards.

The pace quickens with the thumping atmospheric violence of ‘The Head of the Snake’ while vocalist Maurizio Iacono explores his range on the epic ‘Boudicca (Queen of the Iceni)’, a track which also features the powerful lungs of Unleash the Archers singer Brittney Slayes. Like the majority of tracks on the record, ‘Britannia: The 9th at Camulodonum’ is heavy on the drama before ‘Trial of the Gods (Intermezzo)’ provides some respite with a moody orchestral interlude.

‘The Fiddle & the Fire’ is a slow burn with explosions of speed, ‘Son of the Deified’ is pure militaristic mayhem while ‘What Artist Dies in Me…’ and cataclysmic closer ‘The Revolt of Galba’ keep up the momentum with more groove than you can shake a gladius at.

While the balance struck between orchestration and metal is still weighted firmly in favour of the latter, both complement each other impeccably, one supporting the other without ever being too overpowering. Ambitious, robust and confident, The Thirteen Years of Nero is a tumultuous yet expertly crafted barrage of gladiatorial violence.