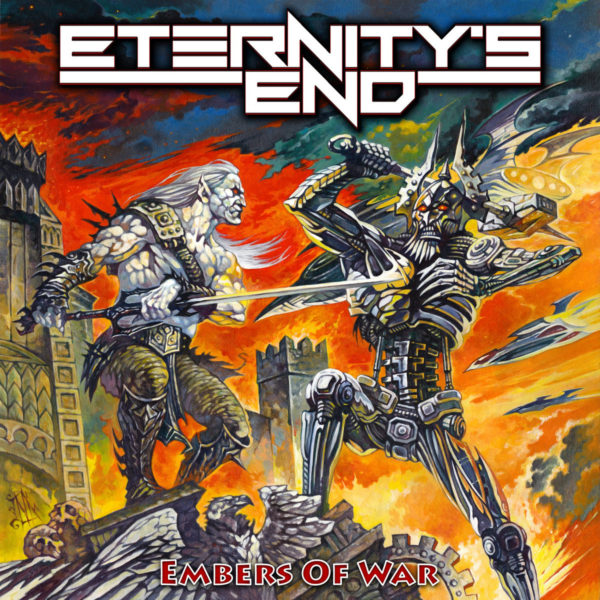 2021 has not been a good year for Power Metal. Whether that is genre-leaders Gloryhammer undertaking significant acts of self-sabotage and unforgivable prickery, or just the product itself – only Beast In Black‘s Eurovision bops came anywhere near denting our Album of the Year chart, causing a light scratch in the outer realms, with perhaps a dead cat bouncing Rhapsody of Fire with any legitimate claim to unfair treatment.

By contrast, 2021 seems to have been a good year for guitarist Christian Münzner. Having spent several years on the proverbial shelf dealing with a condition that affected his left hand, there is fire and motivation that still fuels this technical expert. A key part of the excellent sixth Obscura record A Valediction (Nuclear Blast), the ex-Necrophagist multi-stringer has also found the time and artistic juice to pen a mighty Progressive Power Metal Opus with his side shuffle, Eternity’s End and their much anticipated third album Embers of War (Prosthetic Records) – an outing of speedy dextrous melodic Metal that gives the finger flurries of 2000s DragonForce some serious competition.

Anyway, enough of the exposition… this is a review not a Marvel back-story film: I’ve referred to a legendary quote from Lord Dimebag before, but there really is no point playing smokin’ leads if your rhythm chops hug. I’m delighted to report that there is no danger of the core elements – and in this case, I mean the song-writing, for what is a melodic Metal band without Songs but unicorn wank – falling short on this exuberant and impressive offering.

For those new to Eternity’s End, the main aspects of the band’s sound can be boiled down to Running Wild tempos, HammerFall riffs and Blind Guardian choruses, played by DragonForce, with a headbang or five in Kai Hansen’s direction. All that said, and being less tabloid and dumbed down as this isn’t a copy / paste of the legends of the fall, Embers of War has enough elements of familiarity while still creating and maintaining room within the confines of the Power Metal walls, sitting firmly in the “Have heard Painkiller” circle of the PM venn diagram.

As evidenced on opening shot ‘Dreadnought (The Voyage of the Damned)’, the backbone of the Eternity’s End beast is the Mikkey Dee-on-speed double-bass adrenaline shot of drummer Hannes Grossman, who keeps the energy levels at six-cans of Monster throughout, deftly adding pushes and surges at key points, aware that when everything is over the top – when riffs are thrashing, leads are duelling and vocals are soaring – there is still a need for dynamics, and it is the job of the timekeeper to help accentuate the significant moments.

‘Bane of the Black Sword’ follows, resplendent with its Blind Guardian chorus and traditional Metal centre. Elsewhere, Münzner and sparring partner Justin Hombach get their neo-classical on during ‘Call of the Valkyries’ and their Harder Rock Dokken vibes get checked on ‘Shaded Heart’. In and amongst all that ‘Arcturus Prime’ steals the show with it’s muscular representation of everything that makes up the EE bag, vocalist Iuri Sanson ensuring the hooks catch on, deep.