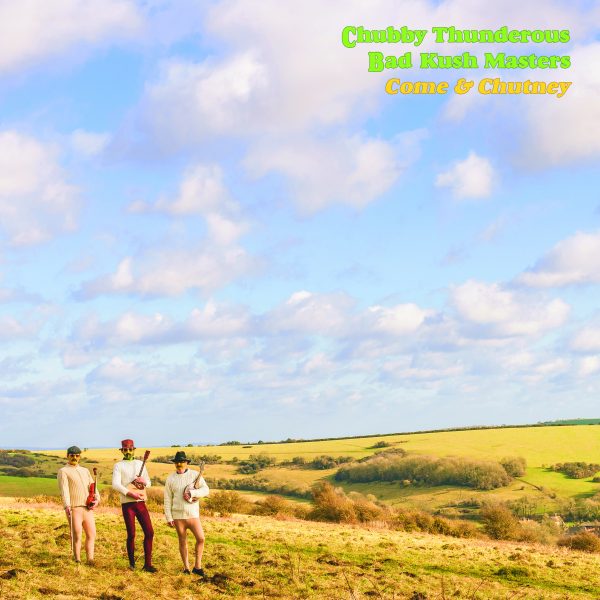 Chubby Thunderous Bad Kush Masters and their album Come and Chutney (Riff Rock) is an aural treasure to behold. Come and Chutney is eight songs and forty-two minutes of old-fashioned psychedelic rock combined with new-fangled doomy sludgy metal. The combination is a jaw-dropping WTF – in a good way.

The opening track, ‘Doggy Bag of Slurry’ begins with a very sludgy doomy barrage of notes as the song sleazes its way into a morass of thunderous drumming on the downbeats, awash with distortedly sticky guitars. The vocals remind of early Black Sabbath, heavy, yet strained and like a stoner jam; mostly music with vocals interspersed. The second track is a chunky head-banging tome entitled ‘Krones of the Kiln’ which serves as a psychedelic head trip.

One song effortlessly blends into another, and track three bursts onto the scene sporting a cowbell! ‘Cajones Feo’, which translates to “ugly balls?”, is a toe-tapping, air drumming, shake your money-maker. The song makes you want to move, and I’m thinking this song would sound boss level live! ‘Glue Ear’ starts with some ominous single bass drumming and bass guitar, simple yet effective. A nice galloping composition follows, yet the guitar is too muddy on this track to really hear any type of melody. ‘Glue Ear’ then incorporates a section that is kind of spacey, kind of Led Zeppelin far out thing before the song ends with a standard 4/4 rock beat.

‘Gutlads’ builds slow and steady before taking off. There is something about the main part that reminds me of Blue Oyster Cult’s ‘Godzilla’s groove-laden vibe. The rhythm section is very much in the pocket during this peppy tune. ‘Gawdless’ has the perfect blend of distorted guitar, bass runs, and bombastic drumming. It reminds you of Jane’s Addiction in places.

There’s a song about Donald Trump entitled ‘Doner Trump’… they are not a fan.

Come and Chutney ends with a ten-minute opus entitled ‘Psychedelic Hallucinogenic Vagrancy’., and the song is nothing short of a stoner’s dream; long, languid, hazy, and sultry thanks to the guest vocals of Chantal Brown. Mark Buckwell on drums, Will Hart on bass, and Owen Carty on vocals and guitars have interpreted and combined old breeds of music anew that are worthy of velvet paintings, black lights, and lava lamps.

Chubby Thunderous Bad Kush Masters are the good trip you’ve been waiting for.