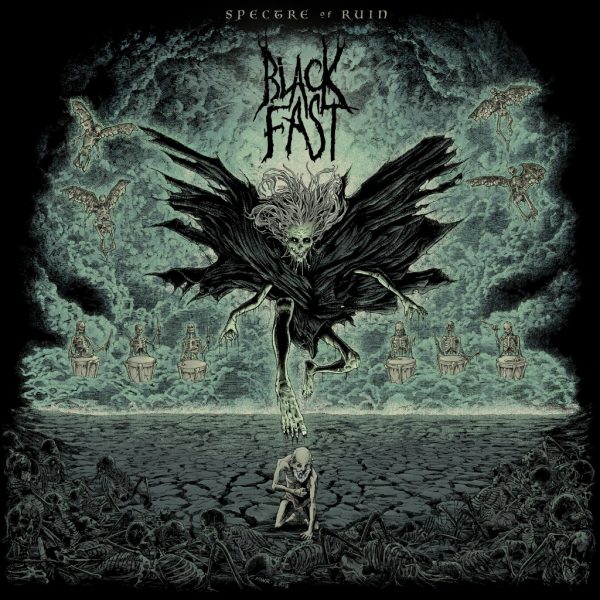 In the nearly forty years of thrash metal history, there have been a lot of changes to the sonic map. Aggression, Ferocity. Nihilism. Angst. Triumph. Agony. These are some of the ingredients that fueled our collective fires and stoked this furnace ever since. Fifteen years ago, there was a mini-movement of “neo-thrash” bands in love with the classic style and maybe marrying in a more late 80s crossover flavor as well. Newer bands were born, and while some died on the vine, other had come to rise. One such band is Black Fast, From the toughness of their St. Louis roots to their never compromising style, they have been trying to carve a truly original piece of the landscape for themselves. On their new album Spectre of Ruin (eOne), they have finally moved away from the pack.

We’re not here to say that previous Black Fast releases weren’t full of bangers, because they were. However, Spectre of Ruin (a James Bond reference maybe?) just crushes from the first note to the last. No intros. No interludes. No filler, Just killer songs and ripping tempos every second. It’s actually the kind of album most bands for go for right out of the gate, but can’t really pull off. With a maturity of songcraft, challenging progressive rhythms, and killer vocals, this album is in beastmode every single second. It turns out that if you try to pin a label on the band, they seem to have landed on progressive blackened thrash metal on the Twister genre wheel. You could also substitute in “badass” if it’s easier.

Lead track ‘Cloak of Lies’ just rips from the first screaming notes. It just knocked me over from the very first second. Frontman/guitarist Aaron Akin is just possessed vocally and the lyrics have never been more severe. There is very little left to the imagination on this album. No misty metaphors, just vitriol track after track. ‘Silhouette Usurper’ is super rough. Another early gem.

There is no chill in this album at all. ‘Phantom I Am’ is another banger. It’s got that real non-stop Behemoth or 1349 blackened death-thrash feel that I love. One of the highlights of this song and the entire album are the great, dissonant guitar harmonies between Akin and Trevor Johansson, channeling some excellent second wave classic black metal influences for sure. ‘Mist of Ruin’ is about the same tempo, but ratchets up the nastiness. This track also has the best guitar solo and melodic parts too.

‘Temple of Leviathan’, ‘Famine Angel’, and ‘Crescent Aberration’ deliver more of the same pummeling force in each, brief, yet feisty track. ‘Husk’ has a little more quality to it with its penetrating chug. The guitar work on this song is just EVIL with a capital E.

While overall the album starts to have a sameness issue on the second half, Black Fast clearly set out to shift the sound of the band slightly, but keep it brutal, with short tracks designed to land a punch. Can’t argue with that, or the fact that any track from this album is going to be really enjoyable to hear live.