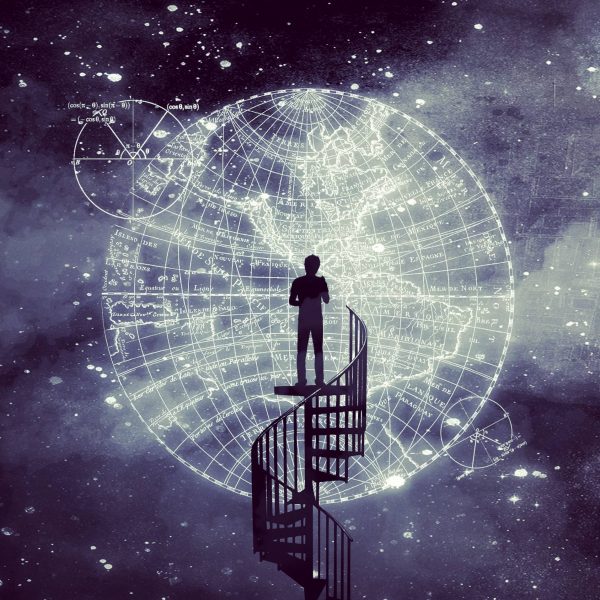 With a name that will annoy grammar pedants the world over Atlas : Empire (yes, the gap is intentional) is an Alternative Rock band with a difference – the Scottish trio’s alt.rock comes complete with large servings of Prog, Metal, and Grunge. With three EPs under their belt since their formation in 2011, December 2018 sees the release of their debut album The Stratosphere Beneath Our Feet (self-released/Bandcamp).

Their changeable and atmospheric sound shares a similar genre-hopping darkness as Arcane Roots and modern-day Suede. To go with their changeable, Prog-infused, alt.rock is a suitably high-minded, dystopian concept. This record explores humanity’s relationship with technology and how our dehumanised and disconnected society would fall apart were it to be suddenly removed, a concept similar to VOLA’s latest album Applause of a Distant Crowd (Mascot).

The centerpiece of the record is ‘Gethesemane’ and ‘The Entire History of You’. These are the two lengthiest tracks and are effectively one long, all-encompassing number as the former effortlessly joins onto the latter. The acoustic intro and big, impactful drums of ‘Gethesemane’ ends with a slow, emotive piano which guides you to the epic stature and soaring guitars of ‘The Entire History of You’, resulting in one moving, intricately woven and largely instrumental piece.

Either side of these are a variety of numbers, like the supercharged ‘As Yet Unwritten’, sounding like a dirtier version of Foo Fighters’ ‘These Days’, and the arena-sized energy and ambition of ‘It’s All In The Reflexes’, to more textured numbers like ‘Diminishing Returns’, whose bite is aided by the vociferous Metal vocals of Steven Gillies and the Prog-esque breakdown toward the end, and the subtle ebb and flow of ‘The Year of the Four Emperors’. Alas, the quality is not sustained throughout and the songs toward the record’s end do not leave much of an impression and while the weighty concept lends itself towards the dark ambience but the seriousness becomes overbearing at times

The Stratosphere Beneath Our Feet is a decent debut of supercharged, Prog-fueled alt.rock.